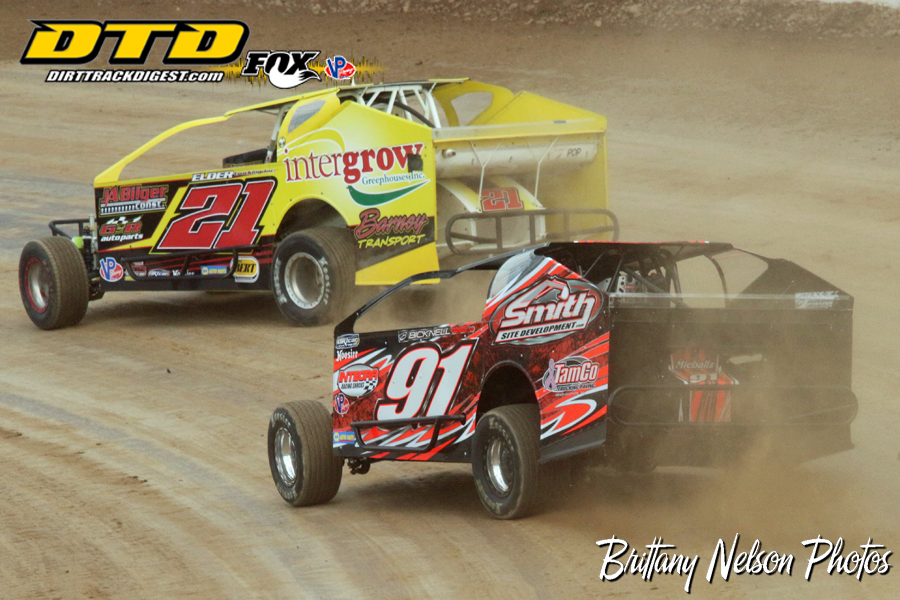 OSWEGO, NY – Super DIRT Week XLVI officially got underway on Wednesday afternoon as cars took to the track for the first time as part of the week-long event.  All three open wheel divisions hit the racing surface for their first open practice of the year at the five-eighths mile facility.

Tim McCreadie, who will have to lock himself in during time trials due to Late Model commitments on Saturday, scored the fastest lap of the day with a 21.654 in the big-block Modifeds.  Jimmy Phelps was right behind him with a time of 21.885.  Marc Johnson came out third quickest while Matt Sheppard and Peter Britten, driving for the Graham Racing team, rounded out the top five.

Hot laps for the Modifieds was cut short when heavy rains moved into the Oswego area just before 5 p.m.

Billy Decker topped the speed charts for the 358-Modifieds hot laps with a time of 20.167.  The Unadilla, N.Y., driver turned a total of 21 laps over the course of the afternoon.  Billy Dunn ended up second quickest at 20.181 while the defending race winner Tim Fuller was third in line with a lap of 20.341.  Chris Raabe and Jessey Mueller completed the top five in times.

Matt Farnham led all drivers in the Sportsman division with a lap time of 22.512.  He beat out Quebec invader Martin Pelllitier whose best lap was 22.724.  Connor Cleveland, Brianna Ladouceur and multi-time Super DIRT Week Champion, Rocky Warner, completed the top five after the first day of practice.


Action resumes on Thursday morning at NAPA Auto Parts Super DIRT Week XLVI with another round of practice scheduled for the 358-Modifieds at 10a.m. before the Super DIRTcar Series big-blocks hit the track at 11.  Time trials for the 358’s is scheduled to get underway at 1:20p.m. with Modifieds scheduled for 2:45p.m.  The top six time drivers in each division will lock themselves into their main-events on Saturday and Sunday respectively.