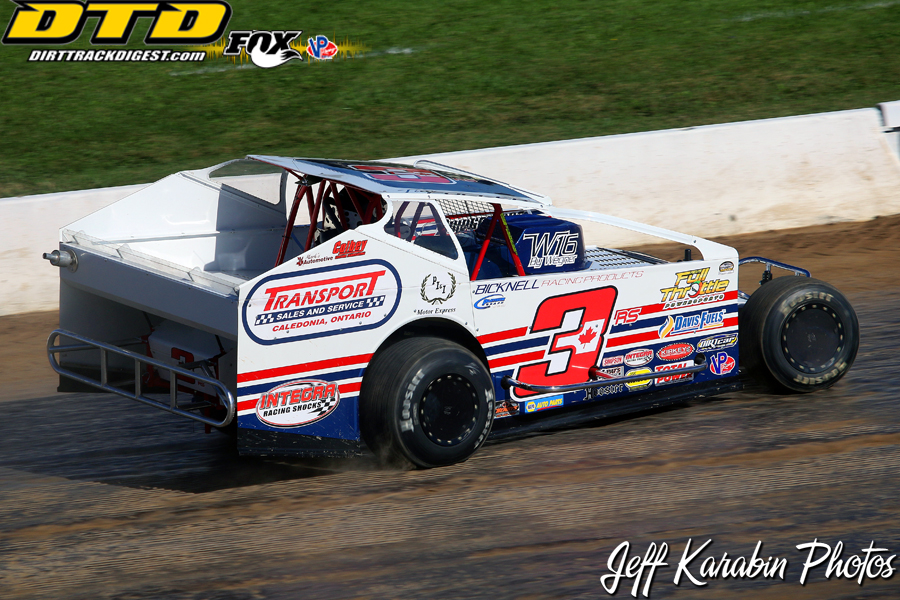 OSWEGO, NY – Even though times change, when Super DIRT Week was moved to Oswego, in the Small Block Division there was been one constant, that’s Tim Fuller putting the Slack Racing #3 up front. The defending race winner once again was the fastest of 56 cars that took time.

If you were laying odds for Saturday, Fuller would be almost even money. “We just have a real good combination going right now. Yea, the track is different than last year but this plays into our hands a little bit more,” Fuller noted, “Places like here, Mohawk, Canandaigua, tracks where you need to keep the momentum is what we like. It’s a new car and motor but the way this team prepares it really doesn’t matter I just have a good piece. Now it’s to figure out on what the track will do.”

Quotes from the rest of the top six….

Matt Sheppard, Outside Pole. – “The car was strong pretty much all day but what will the track do on Saturday is what we need to figure out,” Sheppard noted, “It seemed to stay slick today and there was a lot of sun but I think if it gets more laps it could rubber up. We will be watching the weather, cloud cover, temperatures it will all play a factor on what the track will do. But, today I think some of the Utica-Rome experience paid off.”


Mat Williamson, Third – “I guess this is pretty cool. We weren’t planning on coming until we won Utica-Rome on Tuesday and then with Weedsport getting rained out last night it helped in making the decision for us,” noted the Lernerville Speedway champion, “I have confidence in this car and we definitely have a shot come Saturday. We just have to get through Brewerton tonight as we do just have one car, one motor and then it’s getting ready for the big race.”

Peter Britten, Fourth – “I just have to thank the Graham family first off as if they didn’t offer me the big block ride I wouldn’t even be here,” said the Australian native, “This is my only car so I have to thank Kevin Enders and Dean Billings for also making this possible. To be locked him no matter what happens in the heat races is a good feeling.”

Pat Ward, Fifth – “We don’t do to many small block shows but we always try to have a good chance when we do and getting in the top six is a big help. Takes some pressure off,” said the veteran who echoed the same words as Sheppard, “I do think running Utica-Rome did help us some today but I am sure it will be a different type of track on Saturday”

Erick Rudolph, Sixth – “We had a decent car, I think we can get a little more out of it,” noted the second generation driver, “To be qualified for Saturday is good to have, we might try some things during the heat tomorrow and see what happens.”