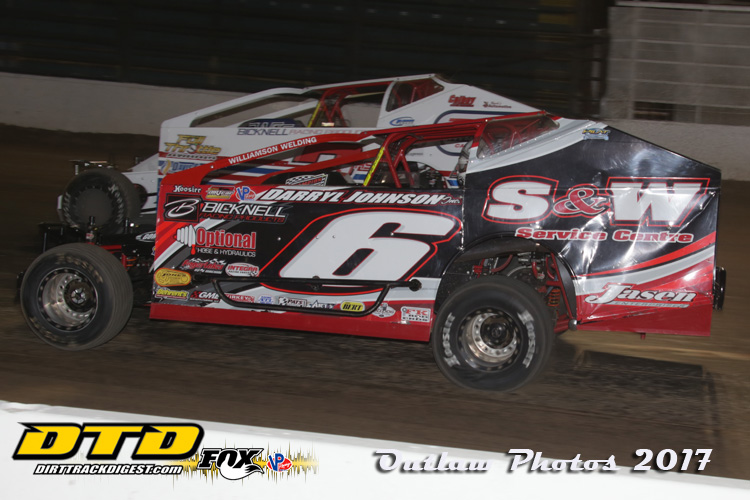 OSWEGO, NY – Mat Williamson and Peter Britten split the Twin 25 qualifying events on Friday night, solidifying their spots at the front of the grid for the Great Outdoors RV 150 for the 358-Modified Series.

In the first 25-lap event, front row starters Tim Fuller and Mat Williamson put on a show. While Fuller and his trusty W-16 took off like a rocket early in the race, Williamson closed in as the laps ticked away. By lap ten, Williamson took a peek for the lead, but Fuller held tough as the duo entered lapped traffic. Fuller pulled away briefly, working through the thick traffic with ease, but Williamson made another run as the race passed the ten to go mark.

In the same spot as earlier, Williamson looked for the lead on the bottom of turns one and two with 19 laps completed, but this time, Fuller couldn’t skate away. While the pair battled through the heavy traffic, Williamson went to the middle of the track. The Ontario driver stuck a three wide, through the middle pass with a lapped car on the bottom and Fuller up high coming to complete lap 23, netting Williamson his first lead of the race. Fuller hung with Williamson over the last two laps, but it was Mat Williamson claiming his first Twin 25 win during Super Dirt Week. Billy Dunn charged to third, while Alan Johnson and Pat Ward completed the top five.

Matt Sheppard led the field to the green flag in the second 25-lap affair, taking control over Peter Britten before an early caution on lap four. Another set of cautions and a pair of red flags kept the field together. Once racing finally got under a green flag rhythm, Sheppard jumped out front, but Britten remained hot on his tail. Britten slowly chipped into the advantage Sheppard had built, closing within a car length by lap 10.


Britten showed his nose once to Sheppard, but once the lane was showed to Sheppard, he switched. Britten briefly dropped back as the two worked through lapped traffic, but began to charge once more with ten laps remaining. The two leaders ran two different lanes, darting left and right through traffic. On lap 21, Britten’s stalking paid off, as he rocketed under Sheppard in the middle of turns three and four. Over the last laps, Britten built up a big lead, and Sheppard was left to fend off Stewart Friesen. At the finish, it was Britten also picking up his first Twin 25 win, followed by Sheppard, Friesen, Brett Hearn, and Chris Raabe.