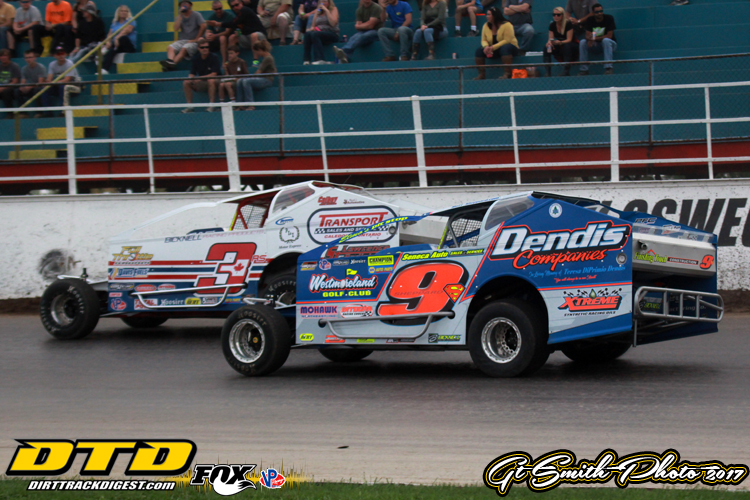 OSWEGO, NY – 2003 at Syracuse was the last time Matt Sheppard graced victory lane on Saturday of Super Dirt Week. This all changed in 2017, as Sheppard claimed victory in the Great Outdoors RV 150.

Tim Fuller took advantage of his second consecutive pole position, jumping out in front of Sheppard. A yellow on lap five kept him in check, but both Fuller and Sheppard motored away when racing resumed. As Billy Dunn, Mat Williamson, and Pat Ward raced for third, Sheppard blasted under Fuller for the lead with 28 laps completed.

A couple quick yellows later, Williamson found himself in second after wheeling around the outside of both Fuller and Dunn. On lap 57, Williamson took one more position, driving under Sheppard in traffic to take the top spot on the scoreboard.

That lead was short lived, as Sheppard darted back by just six laps later. The top five had settled in as the race neared halfway, with Sheppard leading Williamson, Dunn, Fuller, and Brett Hearn. Another yellow for Godown’s left front shredding brought the pack back together with 80 shown on the boards.


Another string of cautions kept the field close, but at least at the lap 100 mark, Williamson was the only car able to hang with Sheppard. As Williamson hung close to Sheppard’s rear bumper, Hearn moved to fourth around Fuller and began to pressure Dunn for third.

More cautions brought the field to lap 128, placing the leaders in clean air once again. That clean air didn’t last long, as the leaders hit traffic with 10 to go. With Williamson hot on Sheppard’s tail and a track that had reduced to one rubbered lane, the stage was set for a battle to the end.

Williamson tried, hugging the rear bumper of the No. 9s for the remainder of the race, even drawing as far up as the rear axel. However, the pass couldn’t be made, and Sheppard captured his second triumph in the 358 Modified event during Super DIRT Week.

“I thought I gave the race away there when Williamson got by me, and then I got it back, all within four laps,” Sheppard said. “Once I got back out in front, I just tried to hug the bottom and make him go around me. He tried everything he could there at the end, but we hung on.”

Williamson took his first 358-Modified win during Super DIRT Week on Tuesday night at Utica-Rome, and openly stated he didn’t come here to run second. Unfortunately for him, that’s what he did.

“When you get that close to 20 grand, you try really hard,” runner-up Williamson said. “I got into him entering one, but his rear bumper was stronger than my front. Congrats to him, but I really wanted that. I could’ve pressed a little harder I think, but I didn’t want to wreck both of us.”

Dunn has ran strong during the 358 Modified feature during Super DIRT Week for a number of years, this one no exception. But once more, victory eluded the Watertown, N.Y., driver.