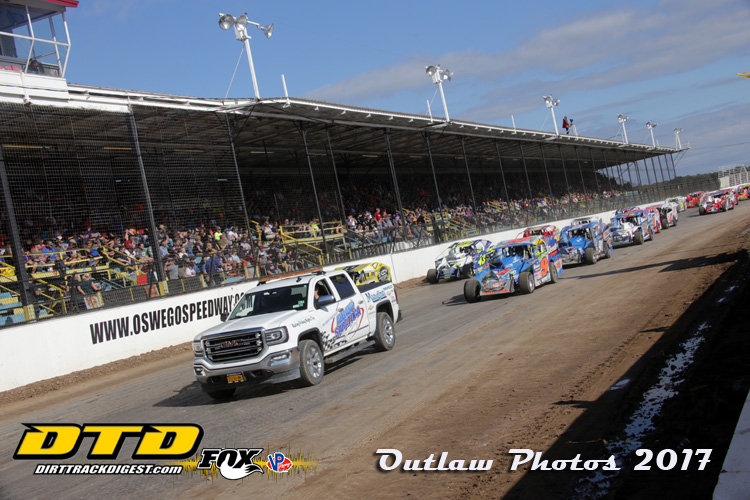 What a difference a year makes.

Sunday the latest edition of Super DIRT Week came to a close and the fans walked away and will spend the winter talking about the finish and the events that led up to it.

For Matt Sheppard, Dave Marcuccelli and Rob Yetman is was one of those Sunday afternoons that they will long remember

On 152 Sheppard pitted for two rear tires and a new right front. With about 20 to go I looked at the guy next to me and said, “Sheppard is gonna win this thing.”


However, the fan in me was pulling for Batman Peter Britten. I saw his tire go flat while leading at Fonda with 11 to go. I saw him get negatively impacted by a lapped car on more than one occasion in the Outlaw 200 which took his chances away and now this.

He had taken the lead on 105 and there he stood until a half lap to go when Super Matt did it again.

New winners are fun, but sadly Britten will remember this race for all the wrong reasons. He will ask himself time and time again, “What could I have done differently?”

The last lap pass coming in the middle of the backstretch saw Sheppard high. In fact he said, “I was driving up in the loose stuff against the wall. It might have kept me from hitting the wall. It was pretty damn close.”

Sheppard won his 39th feature of the year and told the media, “I feel bad for Peter. He was in the same situation this year that I was in last year and had to put his own deal together. He quietly has had a real good year. He is one of the cars to beat night in and night out. He has turned the corner and has his cars running.”

Britten simply said, “He got position on me and it was then his track.”

Peter sat there stunned. The image of him standing being interviewed in victory lane will linger in my mind for a long time. You could tell he was devastated. HE didn’t want to be there, but had to be.

He didn’t have to come to the media center, but he did. It says a lot about him. He didn’t brush off any questions and remained for quite some time talking with each and every reporter.

Britten said, “I’m heartbroken. Some people don’t realize that as racers we put our whole life into this deal. Things happen so fast out there. This is a tough race to win, but I’m heartbroken. We had a brand new car and team and the first time I was in the car was Wednesday.”

The Ray Graham Racing was arranged a few weeks prior to SDW. Will it continue? Only time will tell.

Even Sheppard can’t believe the year he is having and every time he talks about it a smile comes across his face. Thirty-nine feature wins, the Super DIRT Series point lead again and adding more than $70,000 to his checking account this past weekend sends him headlong into Brockville and Charlotte.

Larry Wight, like Sheppard, pitted twice and he also had a stop and go penalty.

However, he rallied back and at one point in the very late going got past Britten briefly. He settled for third, but was negatively affected by the red 176.

Larry noted, “The tires cooled on the red flag and they sealed over. It’s a shame because we had so good of a car. Earlier this week we were a second off so we’ve made progress and I had a dog in the fight today.”

He felt Britten was solid as he explained, “On restarts Peter was phenomenal as he was able to drive away. I had to chase him down in the turns and it took time. I’m happy with third. I can’t get mad because we ran well. We were able to miss the wrecks and got a podium finish.”

After instead of relaxing he hopped into a pay loader and helped pull racing rigs and campers out of the mud. Fans who “hate” don’t see that kind of stuff, but he’s done it plenty of times.

Dave Marcuccelli and Rob Yetman had this entire weekend solid. The last two years at Oswego only they have visited the victory lane for the Sportsman and Pro Stock races.

Neither was really challenged even though the stat sheet shows they won by just over a second.

Yetman continues to bring a show car to the race track. He said, “Not a new car, but new body and graphics. It is by far one of the sharpest cars in the pits.

Marcuccelli went from the track right to the stands to watch the other events and didn’t even take off his driver’s suit. He was all smiles as he beat the best of the best.

The track for the 200 was weird. Just about every driver I talked to said that. Tire wear was going on all race long. The first 100 absolutely stunk and it went from one of the worst races of the year to a classic through the final 100.

Stewart Friesen suffered a right rear flat on lap 60 and brought out the yellow. He came back strong.

The pit stop at 60 brought nearly 30 cars in for tires and fuel.

Justin Haers took over at the front on the massive pit stops.

Justin would lead until 100.

Gary Tomkins lost radio communication with his team and made his pit stops longer than he desired. He actually had to turn off the car to talk to his crew.

Sheppard inherited the lead at 101 when Haers pitted and a lap later Britten went past.

Watching Billy Whittaker and Britten come through the field on the outside when no one else would come off the bottom was classic.

Danny Johnson came out of nowhere to be third at 119

Britten and Whittaker were one-two with 75 to go.

Tough break, but not costly for Jimmy Phelps came on 134 when he and Frank Cozze got their bumpers locked and they couldn’t separate themselves.

Friesen was starting to do what Stew does as he picked his way from deep in the field and was getting cars one at a time.

Wight went under Whittaker on 146 for second place.

Super Matt to pits at 152 to set stage for late race dramatics.

In the early 160’s Whittaker and Friesen battled lap after lap for third. With just over 25 laps to go Friesen apparently got into the left corner of Whittaker and the third place car spun up to the wall. Billy wasn’t happy and returned to bump Friesen a few times before going to the rear.

The hardest crash of the weekend came with 24 to go when Ryan Godown hammered, and I mean hammered, the third turn wall. JaMike Sowle and Billy Decker were involved, but Carey Terrence went up and over flipping violently three times before coming to rest upside down.

At that point 9s was sixth, went to fifth past Danny Varin on 178, fourth with and outside pass of The Doctor on 179, third at 187 diving under Friesen, second past Wight on 195 and taking the lead at 199.5 over Batman.

Brandon Walters was rookie of the race.

Dominic Buffalino lost a motor and reports were that Mike Maresca also did.

Outside pole sitter Rick Laubach ran second until the first pit stop and eventually dropped out.

Matt Farnham almost got Marcuccilli on a restart Sportsman race, but it was Dave’s race to lose.

Connor Cleveland put on a heck of a run for third.

There was no attrition whatsoever in Sportsman as 22 cars out of 30 finished all 75 laps and four cars were one lap down.

Lap 63 saw tremendous traffic and it was then that the chasers could have had a chance, but Marcuccilli weaved his way through traffic with ease.

David Schilling was running well, but lost a spring as it bounded down the backstretch with five laps to go. He was in the top ten.

The Pro Stock 75 had an abundance of yellows.

Kim Duell took the lead once, but had jumped the yellow for a complete restart. Yetman regained momentum.

Jocelyn Roy started third, dropped back to seventh at lap 25 and worked hard to get a third.

Rich Crane, the outside polesitter, was contending, but the gas cap turned up missing after a pit stop and he ended up from the top five to an 18th place finish.

Rick Duzlak got upside down.

Nick Stone went for broke on a restart. Running second he went upstairs and got stuck there getting shuffled. He rallied for fourth.

Dan Older suffered a flat tire on lap 23 and rallied for a sixth place finish.

I’ll catch up later this week on some thoughts about Super DIRT Week, but after six days at the track I need a couple days to catch up.

Comments, new and stuff to foley395@hotmail.com