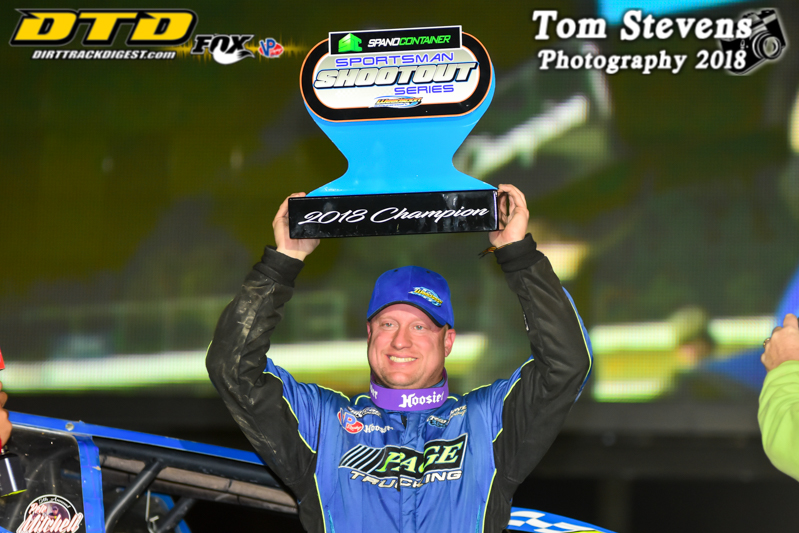 Marcuccilli said, “I really needed to make up points coming into tonight. It hurt me this year as I didn’t follow the region.” And with point leader Brad Rouse running the final 10 laps with a left front flat and finishing ninth Marcuccilli hoped it was enough to help.

The victor has owned the series races at the Weedsport Speedway as this was his fifth win in six series attempts. Only a Kevin Root win ruined a perfect six for six effort in all important, well-paying events.

The eventual winner started alongside teenager, and 2018 Oswego Speedway Supermodified Rookie of the Year, Tyler Thompson and the younger driver took over the point for the first four laps before Marcuccilli went on top for good.


Marcuccilli explained, “I knew he was tough tonight and running second was sort of an advantage as I was able to hammer the top side between three and four to gain an advantage. I don’t think he knew it was there. The car really worked well at that end of the track.”

When action resumed Rouse was starting to pick his way through the field and moved up to fourth place, by the ninth lap.

Meanwhile behind him Will Shields and Andrew Smith were dicing for fifth as the duo chased the top four of Marcuccilli, Thompson, and Kevin Root.

At the halfway point, Smith was up to fifth followed by Shields, Matt Guererri, Jim Spano, 26th starter Jackson Gill and Rocco Leone.

Positions began to change dramatically as Thompson was forced to pit for quick repairs with just about 10 laps to go.

Root pressured the leader several times between the third and fourth corner as he tried to duck inside. However, the preferred line a little higher on the track is what Marcuccilli was after.

While Marcuccilli, Root and Smith were comfortably in the top three Shields and Jackson were battling for fourth.

As the laps wound down suddenly Zach Sobotka, who was 10th with 10 to go had worked his way up through. The last lap excitement saw him get past Gill for fifth.

Root wasn’t unhappy with second as he said, “I figured the only way I could get Dave was on a restart and I couldn’t. I was second in Mr. Dirt points coming in and I think I gained some tonight. I’ll take it.”

Third place Smith, who raced regularly at the ‘Port this year, sounded enthused as he said, “The top cushion really worked for me tonight. I ran pretty good and I really think running here this year against guys like Dave and Kevin has made me a better driver.”

So the quest for the title continues as Marcuccilli hopes he can move on up and Root is considering himself as a threat as it is on to Brewerton and Oswego.

The only serious accident in the prelims saw Felix Murray get on his top between turns three and four. Track safety crew members rolled the car back over from its resting position on its roof and the uninjured driver climbed out unassisted.

The next Sportsman Modified tour race is Thursday, October 4, 2018 at Brewerton Speedway.