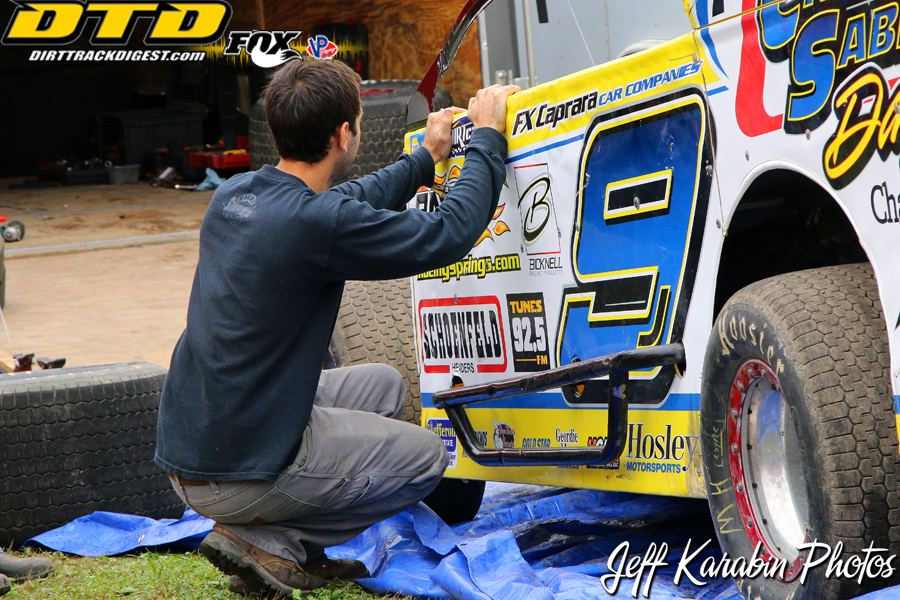 Jordan McCreadie is looking to make his own mark in this year’s small-block event at the Oswego Speedway.

McCreadie, parked alongside brother Tim’s rides, has been focusing on this week’s event.

After a regular season that saw him win twice at Can-Am and a big 50 lapper at Fulton the driver talked about the mixed emotions of trying something different in 2018.

In the past he has run up North, but this year he made a shift.


“I wanted to branch out and try Fulton to see if we could get the car balanced,” he said.  “I’ve seen guys who were front runners at Fulton do well at Weedsport. Look at last night two Fulton regulars were second and third (Tim Sears Jr. and Pat Ward).  I thought if I could run at some of these southern New York tracks that I could gain more experience on the slicker surfaces. I think I’ve gotten better, but obviously I am not a good judge of what I do.”

He continued, ”The set up surprised me a bit as they really haven’t changed that much from some other tracks I’ve run. I thought maybe we could stumble onto something.”

Though he had three feature wins on the year Jordan said, ”There are so many could of and should of races. At Cornwall we were leading the $12,000 to win show and broke. There was a show at Mohawk where I was leading and the torque arm broke about three-quarters of the way through. I led until the very last lap. Overall, the car has been solid except for a few issues.”

As the 2018 season commenced he explained, “It was a good start as we had one back up motor and Pierre Daganais really helps me with motors had another so we had three in rotation. Well, the first series race of the year at Utica-Rome we lost the motor and things spiraled as far as the series (358) went. The other motor we had under the bench in the shop with about 800 laps on it and it was too much.”

The Bicknell chassis is set to go this weekend and Jordan noted, ”Last year I had a guaranteed spot, but got in through the consi.This year we don’t have a spot and I will have to race my way in.”

Looking ahead to track time he said, “Now with the way the rain has fallen the track will change.The prep last year gave us a smooth track and even if we can get halfway to where it was it will be fine. There is no doubt right now that it will be faster.”

Jordan also said, “I have to thank Petey, Ray and Frank for being here this week. I have some other guys helping me, but work is keeping them home.”