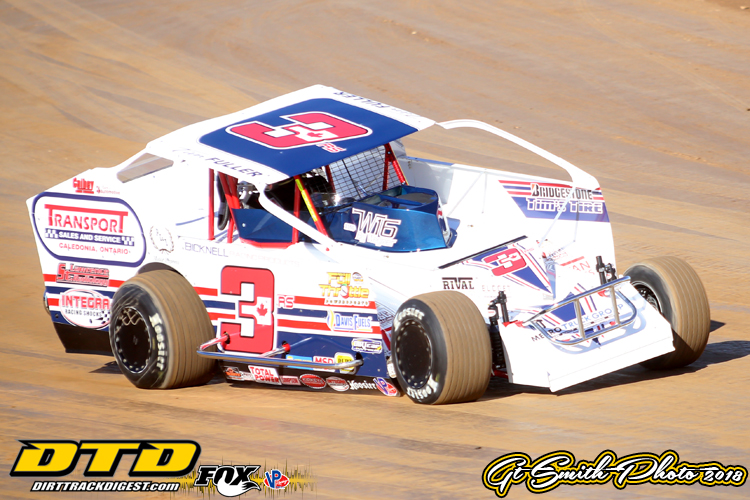 OSWEGO, NY – Tim Fuller is now three-for-three in the pole award for the 358 race at Oswego picking up the pole again this year with a time of 20.899.

“Bobby and Randy (Slack) don’t bring a car here to finish in the back. Winning the pole is a product of the car owners and the people who put the car together, they know what there doing. The track is spot on and we look forward to tomorrow,” said Fuller.

Erick Rudolph has been the hot ticket so far this week with 358 racing. Picking up a win at Weedsport on Wednesday and was clearly a stout car last night at Brewerton until a flat tire ended his hopes of going two-for-two, Rudolph will go away tomorrow in second.

“Even in practice the car was good. We are happy with the whole program. I’m looking forward to the rest of the weekend,” said Rudolph.


Rudolph was the Fast Line Performance outside pole award winner.

Mat Williamson has been a very busy racer this year. He’s been driving the Short Track Super Series for Jeff & Harry Behrent and he’s been racing weekly at Merritville and select Super DIRTcar Series events. Coming up over the next few weeks will see Williamson aboard the Behrents big block and try to make the Eastern States 200 and will also be traveling south to Charlotte for the World Finals aboard the Petruska 66. Williamson will start third on Saturday in the Gander Mountain 150.

“It’s not faster then the two guys in front of me.  We have some work to do but the track is racy enough that if it doesn’t get locked down with rubber,” said Williamson.

Matt Sheppard, last year’s race winner was able to grab the outside of the second row next Williamson.  These two went at it last year in the 150 and this year’ll they’ll be side-by-side once again.  Sheppard has had a run of poor luck to date.  He’s hoping things improve on Saturday afternoon.

Shocking himself with a locked in fifth place time trial effort is Ronnie Davis III or RD3. Davis from Memphis, N.Y., is seeing the stars that he and many others admire in Modified racing.

“Super happy to be with the best in modified racing. We have some work to do but there is a lot of talent here, its an amazing time to be here. Lot of these guys are idols to so many,” said Davis.

Stewart Friesen, the man that is a forced to be reckoned with everywhere he unloads. He’s a master of the long-distance affairs at Oswego and formerly at the Syracuse Mile, he’s also currently in the NASCAR Camping World Truck Series playoffs. The same company that sponsors the truck series in NASCAR will also be the sponsor for the Saturday 150-lap affair at Oswego, Gander Mountain.  He’ll go off from sixth.

“I don’t think the Halmar team has ever been in the top six in the 358 race here. We have some work to do but the guys at DKM have been busy getting all the things ready for these big events,” said Friesen.