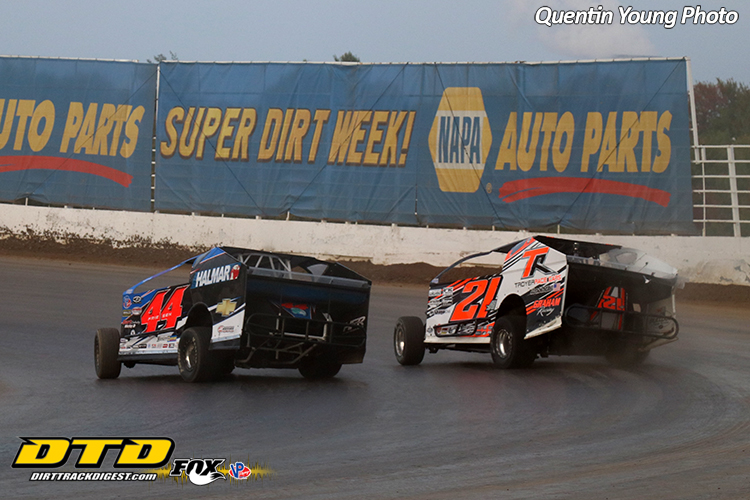 OSWEGO, NY – Peter Britten avenged his disappointing end to Super DIRT Week in 2017 by winning a wild Camping World 150 in dramatic fashion with a late-race pass on Stewart Friesen. Britten made the move late around Friesen for the lead before going on to win the $20,000 payday.

“This feeling is just awesome,” Britten said. “We learned last year that you have to make sure your car is there at the end and we had it today.”

Tim Fuller led the opening laps of the Camping World 150, initially chased by Mat Williamson and Erick Rudolph. Using an early caution and subsequent lap nine restart, Williamson jumped up to the top of the track and blew by Fuller.

Friesen made his presence known early, riding the wall, past Rudolph, and into third by lap 20. Just behind him, Larry Wight charged from tenth to fourth, then to third past Friesen two laps later. Neither pass stuck at the time, as Rudolph found himself back in his earlier position of third by lap 27. With 29 circuits in, Fuller jumped up high and drove back by Williamson in a move similar to Williamson’s earlier pass.


Before too long, it was a four car scramble for the lead between Fuller, Williamson, Rudolph, and Wight. On lap 34, Rudolph and Wight split Williamson in turns three and four, with Rudolph blasting to second and Wight to third. The very next lap, it was Williamson and Wight splitting Rudolph in the same spot, with high-flying Wight now in second.

By lap 37, Wight was all over Fuller for the lead, looking high, low, and even in the wall for a way by. On lap 43, Wight touched the wall a little too hard, and Rudolph went back to second. Meanwhile, Friesen was ripping the cushion and charging forward, getting by Wight on lap 50.

Friesen was a man on a mission, driving around Rudolph for the runner up spot on lap 54. Next up on Friesen’s radar was Fuller, and Fuller wasn’t far ahead. On lap 58, Fuller got hung in the middle off of turn four, and Friesen blasted by. Rudolph got under Fuller the next lap, sliding the polesitter back to third. At this point, Friesen was the only car committed to the top, but it was clearly working.

Through traffic, Fuller and Wight couldn’t match the pace of the top two. Lance Willix slowed on lap 69, pausing competition momentarily. On the restart, Wight blasted from fourth to second up high, and Gary Lindberg followed in Wight’s tire tracks from sixth to fourth.

Wight didn’t stay runner up for long, as Rudolph worked back to second on lap 80. Out front, Friesen was on a roll, driving away from the field and working traffic with ease. The yellow waived for the fuel stop on lap 96, and the first car to take advantage of the open pits was eighth place Mat Williamson.

One constant in this event was the speed of the cushion on restarts. With 106 laps in, the field went back green, and Lindberg rocketed around Rudolph for second. Brett Hearn got an even better restart, charging from sixth to third on the first lap, then past Lindberg for second right after. Ronnie Davis III slid around Wight for fifth, but instantly lost the spot to Pat Ward, who was lapped earlier in the event. David Hebert slowed on lap 112, pausing the insanity for the moment. Under this yellow, a number of fast cars such as Wight, Fuller, Jimmy Phelps, and Matt Sheppard ducked into the pits for fresh rubber.

Rudolph slipped by Lindberg to regain third when race pace resumed, with Ward, Davis, and Billy Dunn from the back arguing over fifth. Out of the cars who pitted, Sheppard was the biggest mover, charging to 12th by lap 122. The remainder of the frontrunners that pitted were stuck in three, four, and at one time five wide battles deep in the pack, with a mosh pit of racecars all trying to move forward. Up front, Friesen and Hearn continued to set the pace. Willix spun on lap 125, slowing Friesen’s lightning quick tempo again.

Britten went balls to the wall when racing went back green, blasting from eighth to fifth in the opening lap. Britten disposed of Ward for fourth the next time, as Lindberg dropped to sixth.

On lap 137, Britten railed the cushion and drove by Rudolph for third, nearly in the wall the whole turn. Marc Johnson slowed for a yellow soon after, and Matt Sheppard clawed to seventh.

On the final restart, Britten threw a slider on Hearn for second, and it stuck. Britten, looking to avenge his Big-Block loss from a year ago, went hunting for the lead, flying around the outside and closing in on Friesen. Britten looked high on lap 141, but Friesen slammed the door. A crossover attempt was unsuccessful, and Britten regrouped.

On lap 142, Britten made his move. Entering turn three, Britten threw his car up high and blasted around Friesen for the lead, clearing Friesen by the exit of turn four. Once out front, Britten kept the throttle down and drove off to his first Super DIRT Week feature triumph, claiming victory in the Camping World 150.