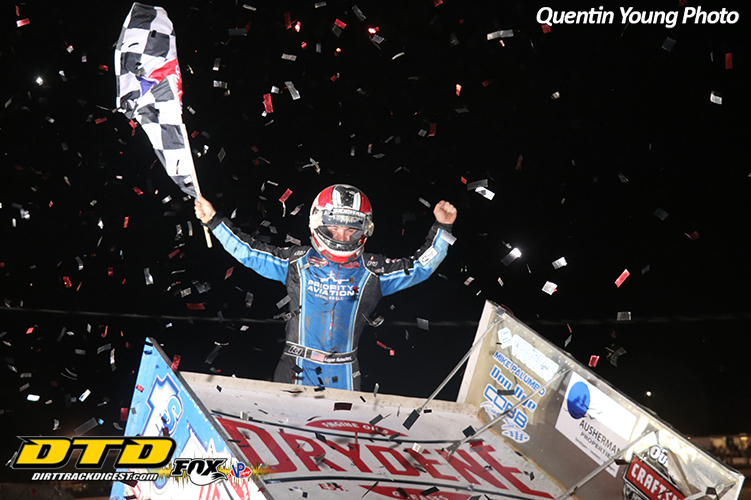 Logan Schuchart and Mike Maresca claimed big wins at Fulton Speedway on Saturday night. For Schuchart, it was his second World of Outlaws Craftsman Sprint Car Series win of 2018. For Maresca, it punched his ticket to the Billy Whittaker Cars 200.

Logan Schuchart took command at the start of the 30-lap A-main, with Kraig Kinser and Donny Schatz in tow. Schuchart wasted no time building up a comfortable lead, already posting a half straightaway advantage as the frontrunners hit traffic on lap eight. Schatz dove under Kinser coming to complete lap 12, taking the second spot as Fulton’s lightning fast surface began to show a little black.

By halfway, Schuchart’s lead had grown to nearly a full straightaway, but the gap began to shrink soon after. While Schatz inched in towards Schuchart, Sheldon Haudenschild was catching both, closing to within striking distance with five laps to go. Haudenschild took little time, blasting around Schatz on lap 26 for the runner up position, but still had distance to cover before catching Schuchart. Haudenschild’s charge came too little, too late, as Logan Schuchart grabbed the World of Outlaws Craftsman Sprint Car Series win at Fulton.

“We’ve been consistently top five, just haven’t knocked off a lot of wins this season,” Schuchart said. “It’s hard when you get close to lapped cars, especially if you can’t catch them or they’re running the same line, it’s easy to panic. We just pulled the wing back, tried a couple different lines, and watched what they were doing.”


In the Outlaws’ last New York appearance, it was Haudenschild making a late charge in a caution-free event to finish second. That was at Weedsport, but the same story played out at Fulton.

“My car was really good up there, and I felt like I was running him down,” noted Haudenschild. “I was praying for a yellow, I kinda thought we’d have one tonight but the whole field did a really good job.”

Donny Schatz has won at Fulton in July of 2014 and October of 2016. For a while, it looked like Schatz may be en route to a third win.

“You just had to have that traffic, that’s how we got there anyways,” Schatz said of chasing down Schuchart before being passed by Haudenschild. “It just wasn’t stuck like I needed to be, but after the weeks we’ve had a third feels like a win.”

Ryan Arbuthnot led the opening circuits of the Dirt Track Digest “win and you’re in” 25-lap affair, but a couple of early cautions kept Mike Maresca at his door. Using the restarts to his advantage, Maresca launched around the top of Arbuthnot to be scored leader on lap three. Once out in front, Maresca set the pace to his liking, holding a steady gap of around ten car lengths through the first half of the event. By halfway, the top two of Maresca and Arbuthnot had broken away from Tim Kerr and the rest of the field.

On lap 21, Shayne Pierce slowed with a damaged left front suspension, allowing Arbuthnot and Kerr to close right up to Maresca. On the restart, Maresca got a nice jump, but Arbuthnot was under fire from Kerr. Lap 23, two to go, saw Kerr scored second, and Maresca wasn’t far in front. With Maresca floating the middle and Kerr down low, each driver had their preferred lane. While Kerr was coming on strong in the final laps, it was Mike Maresca claiming the victory by just the length of a car. Tim Kerr crossed second, followed by Ryan Arbuthnot, Justin Wright, and Rick Richner.