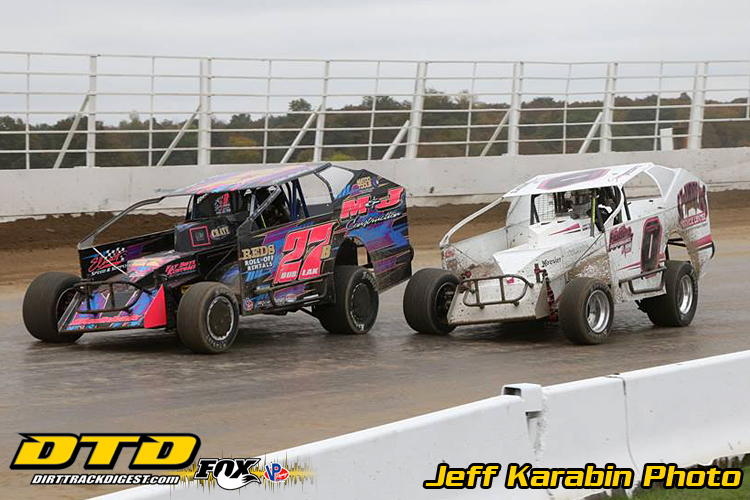 “Oswego has changed this place so much from what it was,” Pecore said. “It was an awesome surface, you could run top, bottom, anywhere on it. We just tried to put on a heck of a show for the fans.”

Dave Marcuccilli resumed familiar position at the front of the field for the Chevy Performance 75, leading over Kevin Root and Pecore at the start.  Marcuccilli flexed his muscle early, gapping Root and now Robert Bublak by nearly a straightaway by lap 12.

With 19 circuits in, Marcuccilli caught the back of the field, but Mike Fowler’s hard hit in turn one brought out the red flag and kept Marcuccilli out of traffic.


Bublak darted under Root and into second on the restart, hanging close with Marcuccilli for the next handful of laps.

On lap 28, Marcuccilli’s mount went up in smoke, pulling to the infield with power steering issues. Now, Bublak had a full straightaway lead over Pecore and Root, chugging along on the bottom of the fast surface.

A lap 30 yellow for Tyler Thompson erased the massive lead, but Bublak ran away again on the restart.

By lap 48, the leaders were entering traffic. Bublak had a ten car length advantage over Pecore, then ten more back to Adam McAuliffe. Connor Cleveland had clawed to fourth, but all eyes went back up front.

As the leaders hit traffic, Pecore erased the lead fast. First it was five car lengths, then one between the top two, and McAuliffe was closing too.

On lap 58, Pecore drove around the top of Bublak for the lead, clearing him off of turn two. That pass didn’t stick, as Bublak dove low and regained the lead by the exit of turn four.

However, this battle was far from over.

With 10 laps to go, Pecore continued to haunt Bublak, with Pecore looking high and low on Bublak and Bublak changing his lane accordingly to defend.

As the lap counter hit 72, the top four of Bublak, Pecore, McAuliffe, and Cleveland were under a blanket, with thick traffic ahead. Coming to the white flag, Bublak was pinched behind lapped cars down low, so Pecore went to the cushion.

Pecore blasted by off of turn four, barely fitting between a lapped car and the frontstretch wall. The top two then split another lapped car, with Bublak low and Pecore high.

The duo raced side-by-side into turn three, and Pecore throttled down on the top.

At the checkered, it was Pecore claiming his first Super Dirt Week victory over Bublak.

While Pecore was elated, Bublak was obviously not.

“Those lapped cars wouldn’t get out of the friggin’ way,” Bublak stated. “They were yelling at the one car over the one-way telling him to get out of the way, and they weren’t looking at the passing flag. It is what it is.”