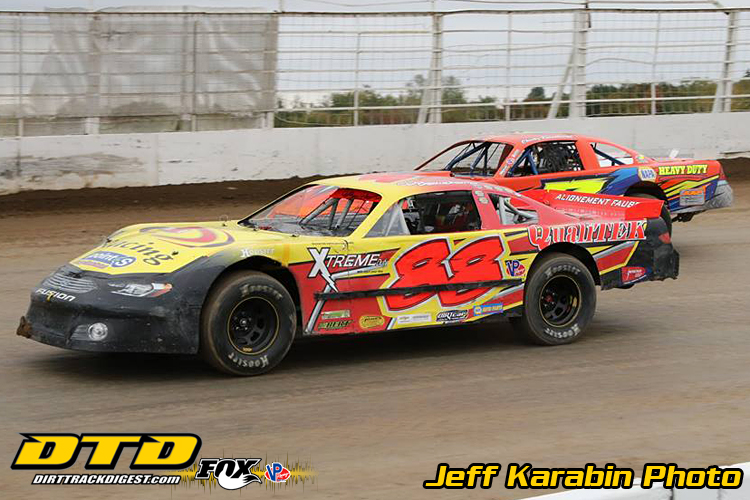 Dumblewski took advantage of his pole starting spot, with Beauchamp and Pascal Payeur in tow. An early yellow forced a restart, and Beauchamp rode the top to the lead on lap eight. Soon after, the caution waived again.

On this next restart, Rob Yetman was spun from third place, sending cars scattered across the track, including fourth-place Payeur.

The next run saw Beauchamp hold a steady yet slim lead over Dumblewski, Rich Crane, and Luke Horning.


On lap 25, Horning dove under Crane for third, but the two drivers hit. Horning went hard into the wall nose-first, and Crane also suffered cosmetic damage.

When race pace resumed, Beauchamp continued to lead over Dumblewski and now Justin Knight. Knight and Kim Duell spent some time arguing over third, with Duell eventually taking it.

Dumblewski wasn’t letting Beauchamp get away, hanging within a car length of Beauchamp until a lap 39 caution.

On the restart, Dumblewski rolled the middle perfectly and drove around Beauchamp for the lead in a move very similar to Beauchamp’s earlier.

As the laps wound down, the top two broke away from the pack, and Beauchamp was glued to Dumblewski’s rear bumper.

On the last lap, Beauchamp dove to the bottom of turn four and pulled a perfect bump-and-run, and the pair raced door to door to the finish.

At the line, it was C.D. Beauchamp winning by inches over Dumblewski

“We were 33rd quick in practice,” noted Beauchamp. “We changed the car, and I hate to do that to Chuck but we had to do what we needed to win. I can’t believe it.”

While Beauchamp was estatic, Dumblewski was far from it.

“It really sucks,” Dumblewski said. “I hate to lose it by that much. I’d rather finish fifth than lose like that. I hate it.”

Justin Knight finished in third, Duell was fourth while Yetman raced his way from the rear to finish fifth.