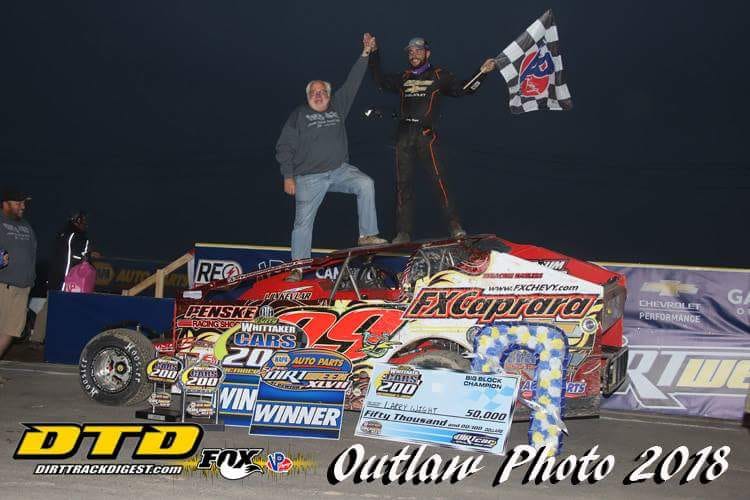 “This is an awesome feeling to be a dad and do this on top of this it is the greatest year I’ve ever had, “ exclaimed Larry Wight as he stood on victory stage after winning his first Billy Whittaker Cars 200.

Wight and crew chief Scott Jeffrey put together a winning strategy as they pitted for three tires and fuel on the 126th lap and the ran the “Larry Lane” on the high side of the speedway to move up through the field before finally taking the lead with 20 laps to go.  He withstood caution flags down the stretch to eke out a four-tenth’s of a second win over Stewart Friesen.

Larry said, “This is huge and the two greatest moments I’ve had is this and being able to qualify for the Chili Bowl. This is our Daytona 500 and it is really something to win the big one.”

Larry, who started 17th, said, “I am just going to ride it out early.”


Wight was running the high lane all around the track. He said, “Eric Kingsley was spotting for me and said to get up and use (the outside) it while it was still there. I had track position from running like that, got in the top five and we were able to do that quickly.”

While many contenders pitted early the 99L waited until 126 and that strategy worked perfectly.

Wight said, “I was surprised that so many pitted earlier. The thing about this place is that sometimes tires can seal over easier and you want fresh tires. We figured fresh tires later would be better than coming in earlier. We talked about pitting much later, around 140, but during the small-block race we got caught up in traffic and a bunch of late yellows really hurt us.”

The track, while smooth for the most part, was not totally predictable.

Larry explained, “It’s a bizarre phenomena that the rubber on this place moves from bottom, middle, slightly up to the middle top. It just moves all over on you. I don’t know if it is abrasion or rubber. Last year it rubbered up around the bottom and everyone came in and put hard tires on and stripped it off and we we all came and put soft tires back on. This year it didn’t lock down like it did before. I don’t know if extra calcium caused that or that it is just the nature of this clay or configuration of the track.”

Continuing he said, “Yellow to yellow it would go from lock down on the bottom and everyone had to be there to know we have to move up to the middle of the track and run there. Halfway through it goes back to the bottom. Call it finicky Oswego or whatever, but it definitely surpassed the Moody Mile.”

In describing how you read the race track and deciding where to run the winner explained, “It is kind of something you have to learn. After years of racing and watching guys like Billy Decker, Pat Ward, Brett Hearn and Timmy Fuller and just watching how they move around while they’re racing. They may be in the lead, but run the same line twice and you can kind of glass the track and see where it’s taking track traction and not taking traction or where there might be some marbles. You just do it.”

Looking at the closing stages of the race he talked about the respect for Stewart Friesen and he was well aware of who was behind him. “I just didn’t want to make the mistakes other drivers had made when Stu was chasing them. You have to be conservative, but not too conservative. I knew I had Jimmy (Phelps) as a buffer between us, but when Jimmy dropped out I knew he was there.”

As the race wound down he knew that Phelps wasn’t in the position to challenge him as Jimmy was trying to go the distance without a stop.

In those moments, Wight said, “I was licking my chops. I knew he couldn’t run with me and I could push him just a bit.”

Earlier in the day Wight reflected on Super Dirt Week 2018.

He had won at Brewerton and was the lone driver in the pits to slide into a Sprint Car to go against the World of Outlaw regulars at the Fulton Speedway on Saturday night and all of that evolved into Sunday.

At Brewerton he won the Hurricane 100 at a track he runs every Friday night.

Larry said, “Yeah the surface was tough, but I probably ran conservatively compared to other guys who just seemed to run through the same holes lap after lap. I knew I should stay on the bottom and run smooth. I figured a mistake would happen and (Steve) Bernier caught that rut in two and I was able to win. It was a huge win for us as it is our home track and I had never won a Super DIRT Week event before.”

Sunday morning he was still brimming over his run in the World of Outlaws show the night before at Fulton Speedway.

“The track was phenomenal and I ran our 360 there. The first lap I was behind Matt Tanner and I went into turn two, hit a rut and bicycled it. I dropped back to last place and by the time I finished I was ninth. I really think that if there had been a caution we could have had a top five. I was busting on Daryn Pittman as I was able to pass him with three laps to go.”

On Saturday afternoon he ran the 358 event at Oswego and it didn’t go according to plan.

Larry explained, “We lost our radio on the pace lap. I pitted way too late. Yellows hurt and we simply ran out of green laps at the end.”

Racing isn’t the factor in Wight’s life that it once was.

During the past year his wife Brook and him became parents of a baby girl Audrey and that has changed his life.

He also is heavily involved in business.

Larry said, he had hoped of expanding the business.

If you’ve been around Central New York this summer you’ve seen many Gypsum Express dump trucks or asphalt haulers. That is Larry’s business as he explained, “I started out with three trucks and talked to my dad about starting this type of business. We got our feet wet the first year and last year we had 25 trucks. Now we are up to 40 and we’ve been busy with black top and construction. I want the business to grow and hope to have 100 trucks soon.”

Continuing he explained, “I created it and made a Construction Division for Gypsum. It made a lot of sense. It is Brook’s and my business as she does the office stuff.”

Well, Larry and his team backed away from the Super DIRTcar Series this year, but he’s enjoyed cutting back.

He is the current point leader in the 358 DIRTcar Series with a 31 point lead over Pat Ward and 43 up on Eric Rudolph and 45 ahead of Steve Bernier.

Will he chase the crown this weekend at Brockville?

“I really haven’t been following the series,” said Larry, “I’ve run the local shows, but overall it really isn’t that important to us. I probably won’t be at Brockville. Our haulers are under the carrier laws and not like to other teams. Because they are under Gypsum it costs us $500 to get our trailers across the border with all of the permits we have to have. I really doesn’t make much sense to us.”

He’s had late season success in his 360 Sprint Car and said, “We finally got the handle on that.”

Wight has been able to go back to back in 360 feature wins this year at Fulton and Can-Am and he said, “I would really like to run that more next year. I might even bring it to Florida.”

This year’s Billy Whittaker 200 winner might have been on the track for the last time this season, but in celebrating the biggest victory of his career it really doesn’t matter.

In regards to the World Finals at Charlotte the Super Dirt Week champion will not be in the field as Larry said, “I’ll be in Kansas hunting white tail deer.”