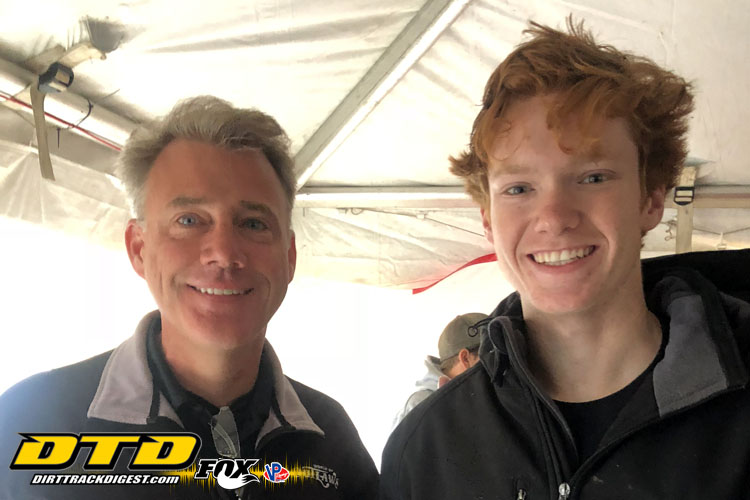 Super DIRT Week 47, wow, some have been to all, some to a few and there are also always newbies. Our first interaction with any of the DIRTcar staff is at the sign in window and as always it was a pleasant experience. For us it’s become a yearly meeting of old friends. 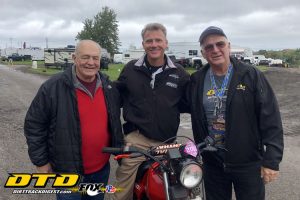 Jillian and Gina are always helpful and smiling, making for a great start to a historic event.
Next we spotted DIRTcar CEO, Brian Carter, who always has time for the fans and racers. Brian fits right in showing that he was once a racer that stepped into a new roll when DIRTcar took over the yearly event.

Our second stop for the day was the parade of cars down Main Street in Oswego, that now has become a tradition for the small community on the banks of Lake Ontario. Everyone seems to enjoy the parade, fans, locals and racers alike.

Later we stopped to talk with Devil’s Bowl promoter, Mike Bruno, we find at many racing events when he can get away. We talked about the success of his 602 Crate Modified 200 event and he said he was very happy with the outcome and he is looking to fine tune the event for next year. 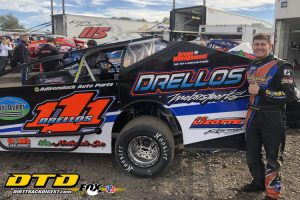 Next we stopped by the Demetrios Drellos pit area and to no surprise, young Demetrios says he is out to win. This young racer is always out to win and admits that some mistakes have been made in how he has handled things in the past. He says he is not proud of how he may have handled some things and we commend him for admitting that. Maybe he deserves a chance to prove himself, like so many have in the past. We understand that what we see is a person with his heart in it for the win and for that you really can’t fault him. Demetrios says that next season he will not concentrate on track points but rather on running the complete DIRTcar Super Dirt Series. He is interested in driving different tracks and learning from the best in the business. While at the Drellos pits brother Rich and Ed were treated to some delicious corn chowder, brownies and coffee thanks to Mrs. Drellos. 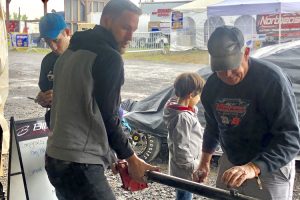 Day two of Super DIRT Week 47 was more of the same, RAIN and wet conditions so after breakfast at Wade’s Diner in downtown Oswego we went back to our hotel and sat in the lounge area where we had a great discussion with Mike Mahaney’s parents, Kathy and Jim. We discussed many issues in our sport solved many of them, or so we thought. For anyone that knows Mike there is no surprise that he has some great parents. Jim raced for many years and still misses it. Kathy was sometimes, his only crew member. We remember some of the big races where we would see Jim race and remember the announcer saying driver of the No. 30, Jim “work shoes” Mahaney. It’s times like these that we spent with the Mahaney’s on day two that you can’t plan and they are so special to us. Jim Mahaney had 15 wins at Fulton Speedway. Today, Jim is still hands on in helping Mike at the track wherever he races.

The past three years we’ve stayed at the Beacon Hotel and are very pleased with our stay, we are treated so very well. The same goes for wherever we go in the Oswego area, everyone is so very welcoming.

Day three of Super DIRT Week the sun was shinning and race cars were on the track for the first time. The feeling never goes away, after 60 years of being a race fan I am as excited as the days we spent at Langhorne Speedway.

While sitting in the backstretch grandstands we ran into Kenny Martin, Pro Stock driver who was making his last appearance at Super DIRT Week this year. Kenny will wrap up his racing career at the Dirt Track at Charlotte in November. After that he and his wife will be moving south.

We spoke with another fan favorite, Charlie Rudolph. Charlie is a second generation driver who we remember as winning the Fonda 200 at the end of the 1985 season. So we asked Charlie, now that Fonda’s new promoter is bringing back the 200 are you willing to come out of retirement?

He said, “I’m happy, right where I am.” Charlie’s son, Erick, drives the No. 25R and has nine wins this season at six different tracks.

Also spoke with multi-time Pro Stock track champion at Fonda, Kenny Gates. He said he has some concern about the Pro Stock car count at Fonda next year because of the track dropping out of DIRTcar and switching to American Racer tires. He wishes Brett Deyo well and he will see how it goes.

Once racing started we were treated to some great racing, Friday, Saturday and Sunday. Drawing on the experience of Eric Kingsley who headed up the track prep crew the racers were given a great surface to race on. One race that stood out for the fans from the Capital District was one of the last chance showdown races for Modifieds. Listed in seventh starting spot in the first last chance event was the No. 2 of Jack Lehner, a rookie at Oswego and Super DIRT Week. A 20-car starting field took the green and at the end of the race Jack was in victory lane after beating veteran Jimmy Horton who was attempting to qualify for he 43rd Super DIRT Week event. The next morning Jack was still smiling when we took this photo of him and CEO Brian Carter. Brian’s advice for Jack for the big race, just do your best and finish. Jack ran a smooth race and come home in 21st position, on the lead lap. 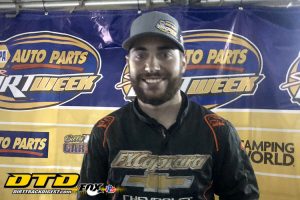 When the NAPA Super DIRT Week came to an end on Sunday evening, Larry Wight of Phoenix, NY stood in victory lane for the first time in his career. Wight has been racing from an early age and is clearly one of the DIRTcar super stars. He began racing in 1999 in Microrods, Slingshots and Karts, moved to Modifieds in 2008 and was DIRTcar 358 Modified Rookie of the Year. The end of last year he and wife, Brooke had their daughter Aubrey. Wight cut back on his racing this past season in order to concentrate more on his business. Wight said on Sunday that he’s happy with what he has done this past year and the Super DIRT Week win is the icing on the cake for his season.

Modifieds of the Valley, A History of Racing at Lebanon Valley Speedway is the most recent book by Lew Boyd and this week it is about to go to the printer and will be available beginning in November. According to a message we received from Coastal 181 and Boyd it will be available at the Lebanon Valley Swapmeet, Sunday, November 4th. It is currently available for pre-order from Coastal 181 online at www.coastal181.com or call toll free (877) 907-8181.