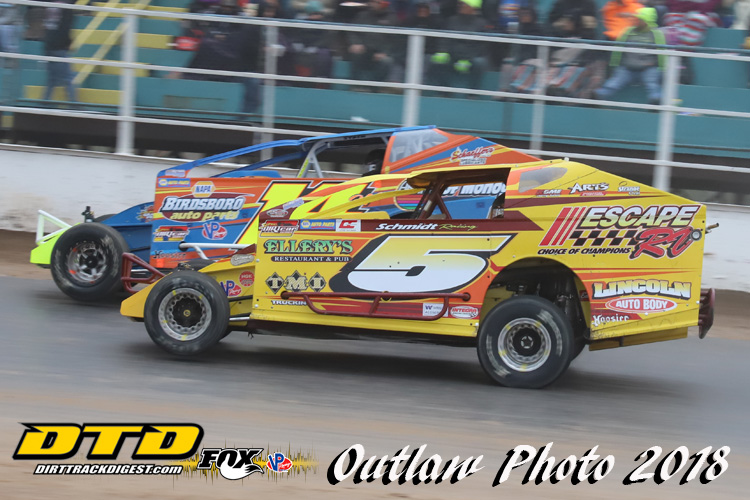 Ryan Godown was sitting in position late in yesterday’s Billy Whittaker Cars & Trux 200 to have have his best finish ever in the big block portion of Super DIRT Week. With less than 25 laps remaining Godown found himself in the second spot pressuring pole sitter Jimmy Phelps for the top spot.

Eventual winner Larry Wight would get past Godown and Phelps within the next few laps to take the win, but the “Ringoes Rocket” was still in position for a podium finish.

Unfortunately for Godown and the Dieter Schmidt No. 5 the engine in their Troyer chassis Modified started to trail smoke and as the laps wound down the smoke started to get heavier. Coming out of turn two after taking the two to go flags the smoke was at it’s worst forcing Godown to shut the motor down.

It was a heartbreaking day for the team and the faces on the driver, owner and crew told the story.  Godown ended up finishing in 30th after starting 22nd.


“I really don’t know what to say,” said the disappointed Godown still shaking his head as to how their winning run ended. “It started missing real bad like it was on seven cylinders but I was still running good. Then it started to get worse and finally my spotter said it’s really bad and to shut it down before we damage it worse.”

The team fought throttle issues early in the race forcing them to make multiple pit-stops and adjust their strategy.  It ended playing into Godown’s favor as the others made their pit-stops elevating him up in the running order.

“I’ll tell what, for a team that doesn’t run these Hoosier tires hardly at all we we’re right there with them,” cited Godown. “It’s just really disappointing. I don’t think we had anything for Larry (Wight) but I was faster than (Jimmy) Phelps there at the end and I know I could’ve held off (Stewart) Friesen there. It just sucks!”

As I was walking away, Godown’s car owner, the legendary Dieter Schmidt caught my attention and whispered to me that he was very proud of the team and that his driver did really good today.

Ryan Watt (Start 31st, Finish 37th) – After a thrilling run in Saturday night’s second last chance race which saw Watt go from the back of the pack twice after being involved in lap one incidents to take the win. Confidence was running high for Watt and his team going into Sunday’s Billy Whittaker Cars and Trux 200. Unfortunately for Watt his day ended early when Billy Decker came down off the top and into Watt causing the No. 14W to slam hard into the inside retaining wall and breaking parts on the cars rear suspension.

“I got caught there going three-wide and Decker came down and just ran into me,” cited Watt. “The car hit very hard and broke the rear torsion bar which ended up puncturing the oil tank.”

It was a rough race for the Boyertown, Pa., driver but his team stepped up their game when needed after Friday’s poor qualifying effort which resulted in Watt making the race and gaining valuable experience should Watt return to SDW again next year.

Jimmy Horton (Start 32nd, Finish 28th) – The former two-time Champion of the 200 had a race he would rather forget. After a strong run in Saturday’s first last chance race Horton just could never get a handle on his new DKM Chassis during the race making numerous pit-stops in the race to try and make the car better.

Billy Pauch Jr (DNQ) – Pauch could never seem to get a handle on his Bicknell chassis all week. The team qualified bad and never could find that much needed speed all week.

Jojo Watson (DNQ) – Jojo suffered the same fate as listed above for Pauch and could never just get speed they needed. Hopefully Jojo will take the experience he learned this year and make a return in 2019.

Jim Britt (DNQ) – Jim had a good time in hot laps that put him in the first group for time trials. Unfortunately for Britt that was the highlight of the weekend for him. Britt time trialed towards the end of the field and could never get the car back to where it was for hot laps.

Rick Laubach (DNQ)- Laubach went to SDW with high expectations after qualifying into the top six last year. This season Laubach could never find the balance he needed in his TEO ProCar and failed to qualify. This was the first time Laubach made the trip north to SDW and failed to make the race.

As always, I can be reached for questions at dirtracefan25@hotmail.com or on Twitter @dirtracefan25