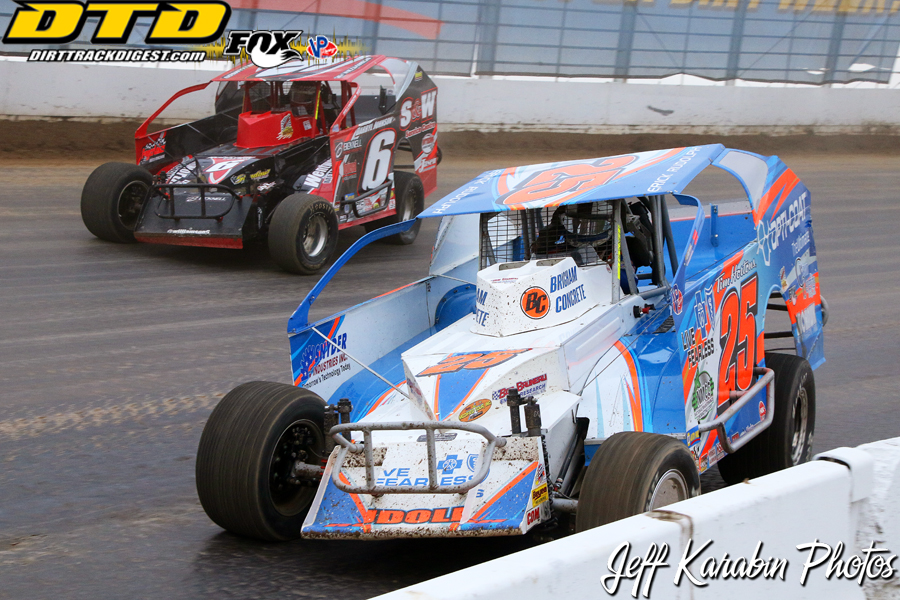 In anticipation of the 2019 edition of Super DIRT Week, a handful of Dirt Track Digest staffers laid out their picks for the major events picking the winner of the Billy Whittaker Cars 200 as well as the pole-sitter.  Our staff also picked a dark-horse candidate for the win.  Picks were also made for the Salute the Troops 150 for the DIRTcar 358 Modifieds, the pole winner for that event as well as winners of the Chevy Performance 75 for the DIRTcar Sportsman and the Wilkins RV 50 for the DIRTcar Pro Stocks.

There were two clear cut picks here for the win and the $50,000 top prize on Sunday afternoon for the Super DIRTcar Series Modifieds.  Mat Williamson and Stewart Friesen are the odds-on staff favorites.  It’s no surprise as Friesen is a five-time winner of the event.  Williamson has been very good in 2019, including a $100,000 win at Orange County.  That factored in as well.  Others receiving votes included Ryan Godown, Mike Maresca, Erick Rudolph and Matt Sheppard.

Defending race winner Larry Wight and Matt Sheppard were the top two vote getters when it came to who would earn the pole for the Billy Whittaker Cars 200.  Wight is the defending race winner while Sheppard took home the honors back in 2017.  Williamson and Friesen also picked up votes in this category.

This category is wide open as is expected as several names popped up as possible dark-horse candidates.  Pat Ward and Mike Maresca were the only two drivers to receive multiple votes.   Maresca is coming off an impressive win in the Outlaw 200 while Ward will be hoping to turn around a tough 2019 season.

Williamson’s name surfaced a lot again here as he’s a multi-time winner with the DIRTcar 358 Modified Series this season.  Erick Rudolph is the current points leader and he also received a healthy amount of votes.  Tim Fuller and Jimmy Phelps each got a nod as well.

Tim Fuller dominated this category as the staff felt like he was the man to beat to start on the pole for the Salute the Troops 150.  He has won the top spot all three years of Super DIRT Week at Oswego so it’s no surprise to see him earn the most recognition.

Shane Pecore is the defending winner and as a result he garnered the most attention when it came to picking a winner of the Chevy Performance 75 for the DIRTcar Sportsman.  Local hot shoe Kyle Inman also received several votes after his win on Saturday at the Fulton Speedway.  Matt Janczuk got a couple of votes as well.