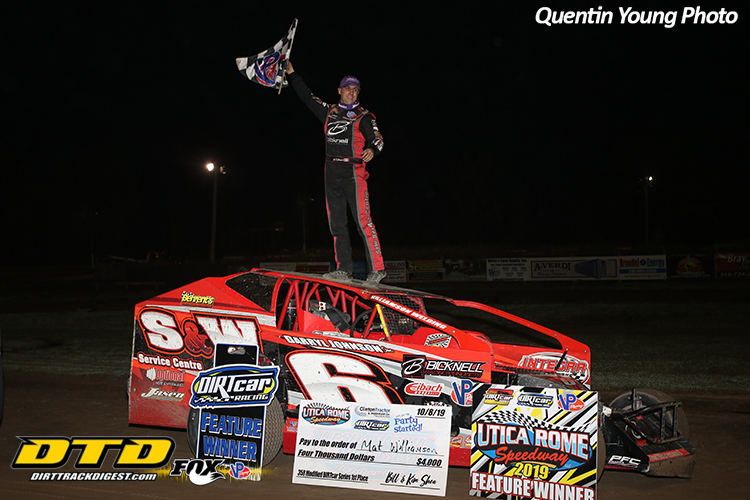 Mat Williamson set the pace early in the 100-lap main, with Jordan McCreadie and Alan Therrien falling into second and third. While McCreadie and Therrien battled for second, Williamson took off, building up nearly a straightaway lead by lap 14. A multi-car crash in the back of the field erased Williamson’s lead, but Williamson matched his prior pace when the field went back green.

By lap 25, Williamson was clear of a four second advantage, but the gap was once more taken away as Lance Willix broke on lap 31. Erick Rudolph got to fourth from eighth before the yellow, but a bad restart sent him back to his original starting spot. Therrien finally grabbed second from McCreadie on said restart, but another quick yellow for Chad Brachmann slowed the pace again.

McCreadie didn’t have a fun restart, as he dropped to seventh and Mahaney moved to third. Mahaney had a quick piece, as he reeled in second place Therrien and got the spot on lap 52, but by the time Mahaney got second, Williamson was already up by another four seconds. As was the theme, a lap 54 yellow flag erased Williamson’s big gap, this time for Rocky Warner and Greg Martin getting together.


Larry Wight slowly worked up to fourth before the caution, but a great restart catapulted him to second. This kicked Mahaney back to third, but Mahaney soon went to work on Wight to try and get the spot back. While those two were going at it, Williamson was driving away and Rudolph had climbed back to fourth. LJ Lombardo stopped on lap 66, forcing another caution.

On the restart, Mahaney almost spun, but kept the car going straight. He would have lost over ten spots in the process, but a stack up, wreck, and caution behind him saved his run. Once racing got resumed, Wight was able to hang with Williamson some for the first few laps of the run, but slowly started to lose touch. Mahaney and Rudolph were now battling for third, but their battle quickly became for second as Wight went up in smoke on lap 81. Rudolph cleared Mahaney for the runner up spot with 84 laps in, but was about five seconds behind Williamson.

Through traffic, Rudolph visibly cut into Williamson’s lead. However, chopping off five seconds in 16 laps is a tall order, and combined with bad breaks in traffic, Rudolph couldn’t mount a challenge. When the checkered flag fell, it was Mat Williamson winning over Erick Rudolph and Mike Mahaney. Ryan Arbuthnot quietly got to fourth at the end, while Alan Therrien rounded out the top five.

“Any time you draw the pole, you just have to keep digging and hope the guys behind you don’t get you,” Williamson said. “We’ll be taking this car to the rest of the shows at Weedsport and Brewerton, it’s rolling good. It feels good to win, especially since I felt like we had the car to beat in the first race here back in June before a lapped car spun and we hit him.”