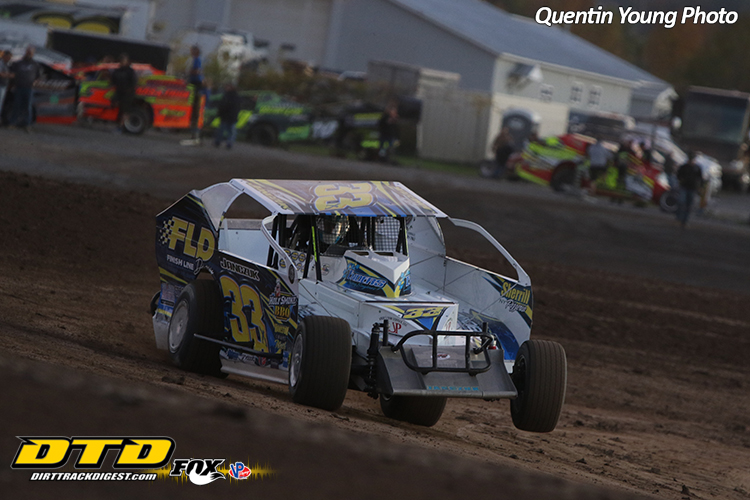 The Super DIRT Week Pregame Show at Utica-Rome was worth the trip and full of action living up to the track’s nick name Action Track of the East. The surface was fast all the way through the 50 lap DIRTcar Sportsman feature and well into the first 50 laps of the 100 lap DIRTcar 358 Modified Series feature. An equal balance of cars in both divisions kept the show rolling along. Dirt Track Digest Live was there bringing all the action to those who couldn’t make it.

The worst thing that happened was a multi-car pileup exiting turn 4 during the 50 lap Sportsman feature that caused AJ Filbeck to flip hard while cars kept piling into him. Thankfully there we’re no injuries, because God is faithful. The body of AJ’s car, and that of Matt Janczuk were completely destroyed. Matt’s front axle was destroyed completely, sheering off on the right side and bent on the left. I paid a personal visit to AJ and Matt after they returned to their pits, and both were already working on their cars to load them to race another day. AJ was going to call his season done after this event anyway so he’s got all winter to rebuild. Matt Janczuk was running the DIRTcar Sportsman series so we’ll be looking for him tonight at Weedsport.

Kevin Root was able to capitalize on the hard racing of Alan Fink and Max Gill as they got together allowing Root to slip by and take the lead of the 40 lap DIRTcar Sportsman Series race. Root celebrated his win with a “roof dance” with his son Nicholas.

The Modified portion of the feature events went uncontested as Mat Williamson took the lead and never looked back. Several restarts didn’t hinder him from maintaining the lead. Larry Wight was a strong contender at the onset of the race as he capitalized on cautions to gain spots to take over second place. Once Williamson took the green on restarts Larry was close enough to challenge a few times without being able to overtake Matt.


On lap 81 Wight’s motor detonated at the exit of turn four onto the front stretch. As he promptly pulled to the pits the race stayed green. Erick Rudolph raced his way into second place and was gaining on Williamson in the closing laps but Williamson was able to keep a few lapped cars distance ahead of Rudolph as the laps ticked down. Mike Mahaney finished third after battling up front with Wight and Rudolph mid-race.

Bill and Kim Shea have worked very hard to present this show since purchasing the racetrack. Last year was rained out. Williamson became the first two-time winner of the Super DIRT Week Pregame Show winning in 2017. I want to extend a special thanks to Bill and Kim, and the entire staff at Utica-Rome for their hospitality and openness to the Finish Line Chaplain Ministry. I pray many years success and fair weather over the Vernon facility. It’s an honor and privilege to serve as Christ’s representative their.

Today I’ve Got some business to attend to then I may go up to Oswego to sign in and get my credentials. Tonight I’ll be at the Super DIRT Week Kick-Off Party at Weedsport Speedway. Tomorrow morning I’ll be at Oswego, then I’ll be heading south east to the Hurricane 100 at Brewerton Speedway.

Pastor Ed will be arriving Friday afternoon to handle some of the Oswego duties for the rest of the weekend. Our Racer’s Chapel Service is scheduled for 10:00AM Sunday morning. The weather may be a factor so we’ll have the location announced of it changes, as well as any necessary time changes to accommodate the weather and DIRTcar’s schedule. We hope to see many of you their. As I mentioned before, my friends Karl and Michelle LaGray will be on hand to lead our musical worship set, and to assist us in ministry after the message.

I received an encouraging and honest email this morning from someone that read my last column. In my reply I was led to be a little transparent to encourage them to fully seek the Lord in their present life. That made me think. My last column was about fully surrendering to Christ so He can regenerate your life. As I thought about the email I received and sent this passage of scripture popped up in my heart:

“Confess your trespasses to one another, and pray for one another, that you may be healed. The effective, fervent prayer of a righteous man avails much.
James 5:16 NKJV”

We all need accountability. We’re not able to live without relationship that we can confide in. A confidant is someone we can let our guard down with, who will listen non-judgementally as we bear our mind and heart to them.

We all need a coach. A coach is someone who motivates us to be and do greater by drilling us in a way that brings our ultimate best out.

We all need a confronter. A confronter is someone who loves us enough to tell us the truth, even when we don’t want to accept it. Eventually their wisdom will catch up with us and correct our thinking, which will lead to adjustments in our actions.

We all need to find someone we can pray with. Jesus taught the prayer of agreement releases more power into our lives.

““Assuredly, I say to you, whatever you bind on earth will be bound in heaven, and whatever you loose on earth will be loosed in heaven. “Again I say to you that if two of you agree on earth concerning anything that they ask, it will be done for them by My Father in heaven. For where two or three are gathered together in My name, I am there in the midst of them.”
Matthew 18:18‭-‬20 NKJV”

Who is a righteous person? According to the New Covenant anyone, and everyone who has accepted Jesus Christ as their personal Lord and Savior becomes righteous through Him.

“Therefore, if anyone is in Christ, he is a new creation; old things have passed away; behold, all things have become new. For He made Him who knew no sin to be sin for us, that we might become the righteousness of God in Him.
II Corinthians 5:17‭, ‬21 NKJV”

The term “might become” in this passage does not indicate a possibility, but rather an absolute ability. Christ becomes our righteousness the moment we confess Him as Lord and accept His death, burial, and resurrection as sufficient to appease God’s wrath for our sins.

“In this is love, not that we loved God, but that He loved us and sent His Son to be the propitiation for our sins.
I John 4:10 NKJV”

Propitiation is a complete and total appeasement of a deserving wrath. Jesus became that for us so that we could become righteous, or, in right standing with God. That’s what it means to be righteous. To be in right standing with God. That’s the kind of person the Bible calls a child of God. According to James thats the kind of person who’s prayers have great power and produce wonderful results.

We all need that kind of person in our life, as much as we need to be that person in someone else’s life. Jesus had a Jewish leader come to Him by night to inquire of Him. He came secretly because he knew if his peers found out he’d be shunned am3d lose his rank and title. When Nicodemus asked Jesus what a man must do to enter the Kingdom of Heaven he got a short straight answer.

“Jesus answered and said to him, “Most assuredly, I say to you, unless one is born again, he cannot see the kingdom of God.” John 3:3 NKJV”

Being born again is not entering into a religion. Being born again is being reborn into a relationship with God through His only begotten Son. It’s a restoration of fellowship and blessing. It’s a redemption from darkness so we can dwell in the light of His glory. It’s a remission of sins that are replaced with His righteous nature. Yes, we all need to be that person.

If I can assist you in any way or clarify any of these things scripturally let me know. We’re here to serve you. Contact me by email at flchaplain@windstream.net, or on Facebook at Finish Line Chaplain. See you tonight.