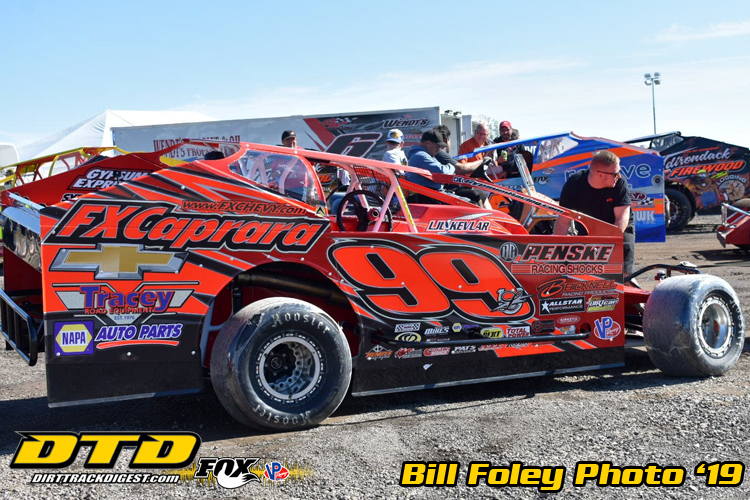 More than 50 big and small-block Modifieds went through inspection as approximately 144 cars were checked during the day.

Meanwhile, last night at Utica-Rome Speedway 40 358’s and 43 Sportsman filled the pits for the first night show of the week.

Defending 200 winner Larry Wight has a new car at his disposal.


Billy Decker will also have a new car at his disposal for the big-blocks.

Robbie Bellinger, seeing duty in both featured classes, is still suffering from lingering effects of the flu and is hoping to recover to full health this week.

Sportsman driver Brianna Ladouceur has a sparkling new car with the colors of the go kart she drove when she was younger.

Greg Atkins brought along his big-block and small-block for the first time.

Tom Sears Jr. will be running only his big-blcok as the 358 was destroyed in an accident at the Fulton Outlaw 200. Tom said the rear end and frame where ripped out. He said, “Ten hours at the track for two laps of racing.”

Scott Kerwin will be in Buddy Pawlik’s Sportsman. He’s been out twice in the car of the novice driver this season and has two wins at Ransomville.

Billy Whittaker took his own $100 for the quick time of the 358 event.

The first Sportsman heat was a good one between Chris Mackey and Janczuk.

Mark Yorker passed Root on the final straight for a .053 second victory in heat two.

Larry Wight and Billy Whittaker were chess players in their 358 heat as the first heat had six yellows mostly due to restarts. Wight got the win and Whittaker eventually found himself one spot out of the draw.

Greg Martin had a sensational move in his heat as in one feld swoop he passed both Bobby Varin and Brett Hearn.

The final heat proved to be the most exciting as side-by-side racing between Ronnie Davis and Ryan Arbuthnot was lap after lap of wheel to wheel racing. In the end the R70 was a winner by .056 of a second.

Charlie Tibbitts put on a show in the feature as he won the final last chance race running away and started 22nd before finishing fifth.

A massive pile-up in the feature destroyed the cars of A.J. Filbeck and Janczuk while inflicting damage on Jeff Taylor, Dave Moyer and others.

Filbeck indicated that is he “good,” but his car is need of a couple front radius rods, front shocks and body panels.

Great drive by Brianna Ladouceur came up two laps show as running in third place she ran out of fuel.

It was a fast track all night long at UR.

One of the body panels on Brandon Carvey’s 19 Sportsman was on the Andy Noto owned, Chad Phelps driven small-block that wrecked at Oswego a couple of years ago.

That’s is for this time around. Any news, notes, etc send along to foley395@hotmail.com