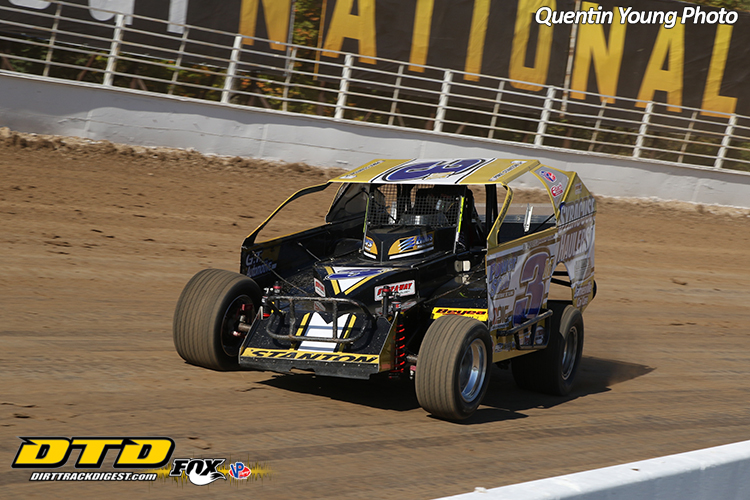 OSWEGO, N.Y. (October 10, 2019) — Last year, several central New York tracks set the 358-Modifieds as their headliner, and ever since the change happened, car counts have steadily increased. The move to Small Blocks allowed some Sportsman drivers the chance to jump into a Modified division, including Kyle Inman and Michael Stanton. These two drivers just made the jump to 358-Modifieds, and both are trying their hand at Super DIRT Week.

Inman made his 358-Modified debut on Tuesday night at Utica-Rome, posting a 22nd place finish out of 38 entries.

“A W-16 came available at a really good deal, and Matt Steffenhagen and I have been talking about moving up for most of the season,” Inman said. “We wanted to race in the next class up and get out of Sportsman. We weren’t sure if we were ready, but we had a really good year with the Sportsman, so we thought we’d get a W-16 and give it a shot. We got the motor, Matt offered up his car, and here we are.”

With the Wegner 16 motor, which is only 327 cubic inches, Inman doesn’t have quite the horsepower that some of the built motors have. However, compared to the approximately 370 horsepower of a 602 Crate, it is still a major difference.


“The speed difference at Utica was surprising,” noted Inman. “I wasn’t sure what it was going to be like, but the track was wide open. It was quite a bit faster going off into the corners for sure, it was crazy. They lay over in the corners way harder, dig harder, it’s different.”

About ten pit stalls down found Michael Stanton’s #3M, who made his first start in a Small Block at Canandaigua two and a half weeks ago. Then, Stanton brought the car to Fulton for the Outlaw 200, but had a variety of issues with the car, like a new steering box going bad.

“We had a good opportunity with Enders Racing Engines at a good price, and we were tired of getting wrecked in Sportsman,” Stanton said. “Honestly, the Sportsman and 358 seem pretty similar, setup and everything. It really just feels like a faster Sportsman.”

While Stanton is taking his first shot at Oswego in a Modified, he has Sportsman experience at the track.

“This place is like a really big Weedsport,” said Stanton. “Its a really weird shape like Weedsport, but I always suck there. I’m thankful for all this practice though, when I’m out there with other people I can see what they’re doing, learn, and find a good line myself.”

Both Stanton and Inman have similar goals for their weekend, and that’s to put it in the Salute to the Troops 150.

“Qualify. That’s it, I just want to qualify,” said Stanton. “I just want to make it in and say I got to race the 150 at Super DIRT Week.”

“We put a time up, it wasn’t the greatest, but we got some experience,” Inman said. “We came across some issues, and it was our first laps on the track with this thing. Just getting in the show would be great.”