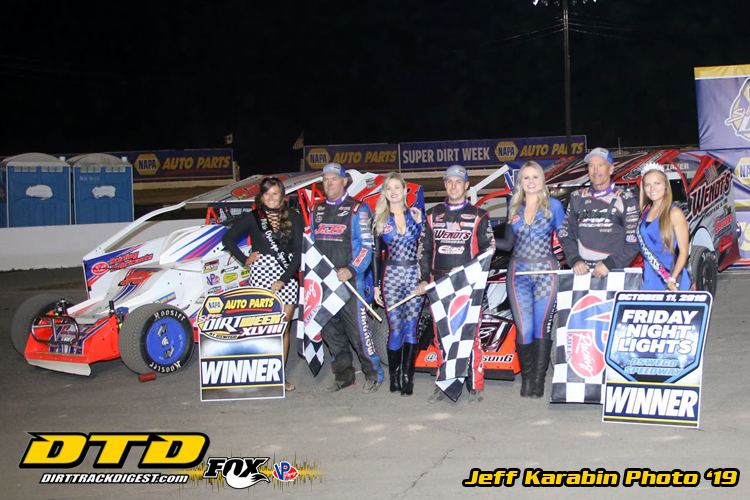 OSWEGO, N.Y. (October 11, 2019) – Jimmy Phelps, Mat Williamson, and Tim Fuller split the Triple 25 events for the DIRTcar 358-Modified Series, as Saturday’s field for the Salute to the Troops 150 is taking shape.

Saturday polesitter Jimmy Phelps showed the way early in the first Triple 25, with Dave Marcuccilli and Billy Whittaker sliding in line behind him. Marcuccilli spent much of the first half within striking distance, but by halfway, the leaders caught traffic. Phelps maneuvered better than those behind him, putting two seconds on Marcuccilli by lap 15.

Louie Jackson found the turn one wall on lap 16, and the yellow waived. Phelps darted away on the restart, but Justin Haers found big speed up high to drive from fifth to second. Just as Haers reached Phelps, Phelps also jumped high and kept the lead. David Schilling lost a tire on lap 22, forcing one last caution in the event.

With Phelps and Haers both wanting the top, there was some competition for position entering turn one. The result saw Haers bounce off the fence and lose second to Mike Maresca, but Phelps was long gone. When the checkered fell, it was Phelps winning over Maresca, Haers, Marcuccilli, and Billy Decker.


“We got some work to do, we’re not perfect,” Phelps said.  “We got a little surprise from the 3 car.  I wasn’t ready for that.  It got a little scary.  We just gotta keep working.”

The two hotshoes of the 358-Modifieds, Erick Rudolph and Mat Williamson, led the way in the opening laps of the second event. Rudolph led the first few laps down low, before Williamson got motoring up too to lead lap four. Brian MacDonald then found the turn one fence to draw the first yellow with four laps complete.

The top two broke away from third place Tim Sears Jr. on the restart, putting a straightaway on Sears by lap nine. However, the top two were still stuck together, with Rudolph keeping Williamson within striking distance. Rudolph’s persistence paid dividends, as he drove by Williamson to lead lap 11, but the pass was negated with a caution at the same time.

After a few failed attempts at a restart, Williamson got away from Rudolph. Sears slipped big, allowing Billy Dunn to get third while Sears dropped to seventh. Another lap 16 yellow brought Williamson back to Rudolph, but Williamson drove away once more. After a carnage-filled last few laps, it was Williamson winning over Rudolph, Larry Wight from deep, Kenny Tremont, and Dunn.

“I can’t say thanks enough to my good car owners,” Williamson said. “It was a pretty good run, but the important one is tomorrow. We’ll see what we can do this weekend.”

Todd Root got the jump on Tim Fuller at the start of the third Triple 25, but didn’t stay out front for long, as Fuller moved past and to the lead on lap three. As Fuller pulled away, Anthony Perrego put pressure on Root, but a lap five caution halted the battle. Corey Wheeler stole third from Perrego on the restart, while Fuller and Root pulled away.

A lap 10 caution for Brian Swarthout bunched the field back up, and Wheeler moved into second. Fuller wasn’t shy about flexing his muscle, as he quickly pulled away to a big lead. Behind him, Mario Clair got fourth from Perrego.

As the laps wound down, Fuller moved into traffic. It didn’t matter much, as he continued to pull on Wheeler, up to a full straightaway by lap 20. At the end of lap 25, it was Fuller winning over Wheeler, Perrego, Clair, and Root.

“It’s been really good; this car is really fun to drive,” stated Fuller. “The track started out wide, but started to rubber some. That happens when you have this much run on it in the sun.  They’ll work on it.”