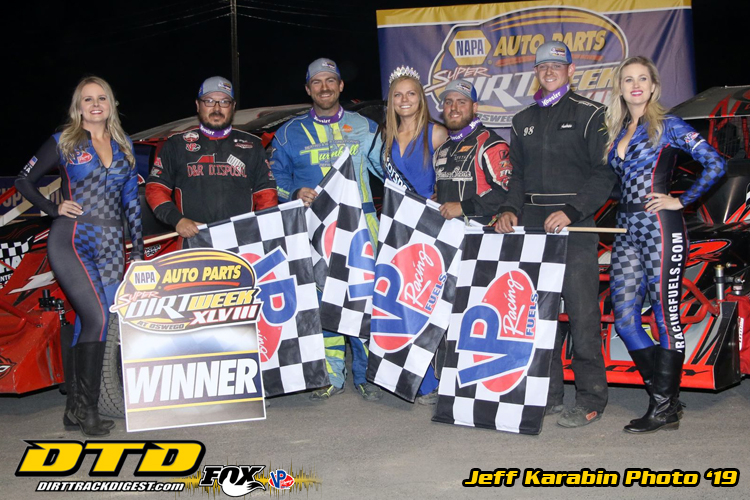 “It was really a solid tonight,” Inman said. “We had a disappointing time trial missing the top six, but the car has been fast all week. We’ll be starting where we need to be to seal the deal on Sunday.”

Robert Delormier starts outside pole on Sunday, but started pole in his qualifier. Delormier dominated much of the event, but came under heavy pressure in the final laps from Adam Pierson. However, Delormier was able to keep Pierson at bay to get the victory in the second Sportsman qualifier.

“It was solid, starting up front is always good,” noted Delormier. “We were guaranteed for the feature, so we went out there and tried to stay up front, but if not we would pull in. We stayed out and got the win.”


After Addison Bowman forfeited the pole, Shane Pecore started on the point in the third qualifier. Over a caution-filled event, Pecore was never challenged, as he crossed the line first over Chris Mackey and Jackson Gill. However, Pecore didn’t get any trophy, as a DQ gave Mackey the win.

“That wasn’t the way we wanted to win,” Mackey stated. “Rules are rules, but we’ll take it. We were able to get second on track but now I’m here in victory lane.”

Andrew Buff started up front in the final qualifier, and was only pressured during early restarts. Matt Janczuk was able to stick around in second to be within shouting distance as they caught late traffic, but it was Buff winning over Janczuk and Cole Hentschel.

“Clean air always helps,” said Buff. “Having Janczuk start next to me got me nervous, but we got it done now we got a good starting spot in the feature for Sunday.”