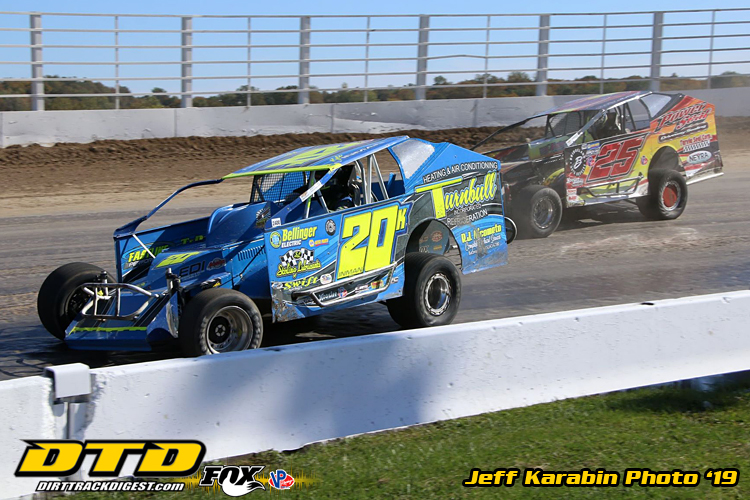 “That was a crazy race,” Inman said. “I was rolling around the bottom biding our time.  Our car wasn’t good the first 15 laps or so. I honestly didn’t think I had what I needed.  We were just kind of cruising around the bottom, but this thing restarts awesome. This has been the longest week ever.  It was an awesome week.  I can’t believe it.”

Kevin Root led Robert Delormier and Addison Bowman in the first laps of the Chevy Performance 75, pulling away quickly at the start. The yellow flew first on lap four, as Bowman lost a motor and came to a stop.


Moise Page and Delormier went to battle for second on the restart, with Kyle Inman slotting into fourth before Jamie Begor slowed on lap 13.

Inman worked by Page and Delormier following the restart to slide into second by lap 21. Behind him, Matt Janczuk had climbed from 13th and into the top five, using the whole racetrack in the process.

At the one-third mark of the event, Root had stretched out the gap between himself and Inman to about three seconds, but a yellow on lap 27 for Cedric Gavereau erased that lead.

Janczuk took second from Inman on lap 36, then went chasing after Root. Using the far top, Janczuk pulled even with Root on lap 40, then completed the pass the next time by.

Once out front, Janczuk began pulling away, leaving Root to fend off Inman, but Inman grabbed that spot on lap 44. A yellow two laps later set up a restart, with Janczuk now leading Inman.

On the restart, Inman powered through the middle to steal the lead. Janczuk fell back to second, but didn’t let off the pressure, hanging right with Inman through lap 60.

Root was still stuck to Janczuk, with the top three under a blanket as they hit traffic. With 10 to go, Janczuk and Inman were set for a late race fight.

Janczuk caught some traffic at a bad time, and Inman pulled out to a one second lead. With four to go, Janczuk clipped the inside wall and handed second over to Root, but Root was too far back to catch Inman.

With two laps left, Andrew Buff spun while running fourth after contact with a lapped car, setting up a green-white-checkered finish.

Inman had a fantastic restart, and Root couldn’t hang. However, Jessica Power and Brad Rouse wrecked on the final lap, along with a separate incident for Scott Kerwin, which set up another two lap dash.

This time, there was no issues, and Inman mastered the second restart in a row. Crossing the finish line first was Kyle Inman for his first Super DIRT Week win.

Root, started pole and led a bunch of laps, but didn’t have enough to get by Inman on the late race restarts.

“It’s been a great DIRT Week for us with a win at Utica and the pole here,” noted Root. “I just didn’t have enough to beat the 20 car.  We’ve been fighting him all year. It was fun with battling up front with Inman and Janczuk, I think we were the best three cars much of the year and it showed today. We were okay early, but I started fading late, I was just too sideways on the restarts.”

Janczuk also led a bunch of laps, but gave up the lead on lap 50 and never recovered.

“It’s disappointing, we had a really good car,” Janczuk said. “Inman beat us on the restart, and I could stay with him but then I clipped the wall and got a flat. Inman, Root, and I ran the tour all year together.  It’s fun to race clean and hard with them. I was sailing around the top in three and four, that was a ton of fun.  I think I was the only one up there. I can’t thank Tom Juno for letting me drive his car after I lost mine.  We were good.”