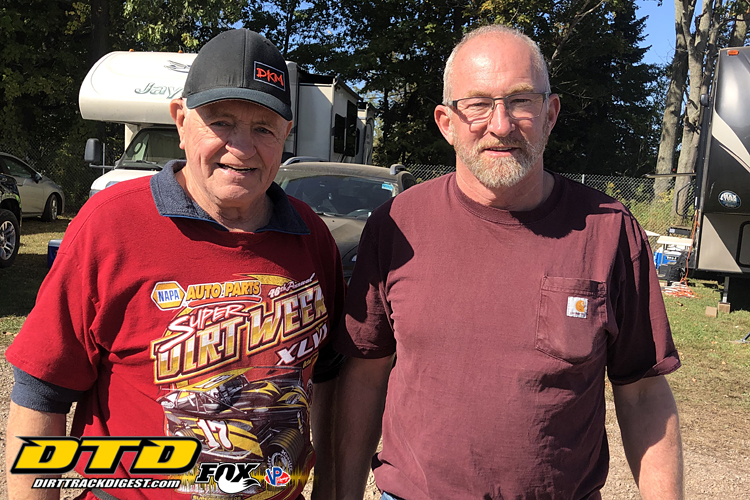 Day one of Super DIRT Week for us was Wednesday and the first thing we did when we arrived in Oswego was go the Main Street for the annual parade of race cars.  Each year this event grows by fans on the street to watch and cars participating.  This year World Racing Group, DIRTcar CEO Brian Carter drove his No. 6 Pro Stock in the parade.  Brian was the one that originally thought the parade would be a great way to start SDW.

Next we stopped at the sign in window where we get to see our friends, Gina and Jennille, from WRG headquarters in Charlotte who are there to orchestrate an orderly entrance plan. 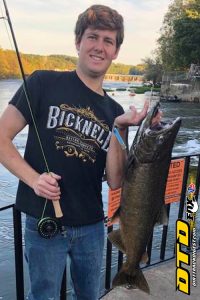 On this day our next stop was at the pit area of Demetrios Drellos where brother Rich had a great lunch.  We’ve heard drivers tell race stories but when we met Demetrios he had a fish story and a photo to prove it.  It’s a King Salmon he caught in the Oswego River the day before.  Demetrios earned a place among the DIRTcar stars this season by winning the Super DIRTcar Series event at Albany-Saratoga.  During time trials at SDW Demetrios was dubbed with a new nickname, Kid Quick.

We also spoke with Mike Maresca about his impressive win in the Outlaw 200 at Fulton one week prior.  He said his mind is now concentrating on the next race at SDW, sounding much like something Jack Johnson would say after a big win.


Billy Decker was next on our list of drivers to talk with and when asked about winning at SDW, he said, “I’m here everyday and it seems fair I should get a win.”  And he did in the Salute to Troops 150 on Saturday.

We went to dinner at Canale’s in Oswego our first night in town and ran into the owner of Oswego Speedway, John Torressee.  We thanked him for all he does for the SDW event and he said it was many people that made it work.

Day two at SDW and morning starts as usual with breakfast at Wade’s Diner, wow, if you leave there hungry it’s your own fault.  Wade’s, like all of Oswego, have welcomed the race crowd each year since SDW made the move in 2016.

On the agenda for day two was practice and then time trials for big blocks and 358 Mods.  Nearly 80 big blocks and 82, 358 Mods took time with one big block missing, all time SDW winner, Brett Hearn; motor issues prevented him from taking time and he knew he would have to qualify through the qualifying events and start further back than he wished.  Top six for big blocks were Billy Decker, Matt Sheppard, Mat Williamson, Tim Fuller, Anthony Perrego and Justin Haers.  Small block top six were, Jimmy Phelps, Erick Rudolph, Tim Fuller, Dave Marcuccilli, Mat Williamson, and Todd Root. 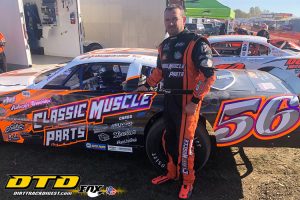 We spoke with two Pro Stock competitors who put great effort into coming to SDW and the results were show pieces worthy of something you might see at a car show.  Kim Duell and Jay Fitzgerald are always looking for ways to improve the sport and the Pro Stock class.  Many fans relate to Pro Stocks because of their similarity to street cars.  Fitzgerald mentioned he likes having CEO Brian Carter racing in their mix, he sees it as a plus to promote the class. 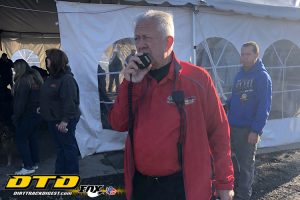 Each series under DIRTcar has someone in charge of the series and for the Pro Stocks is Denis Moquin who comes to local tracks during the season to oversee Pro Stock events.  We’ve noticed that when he comes to the track he brings a message to the drivers that seems to made a real difference.  In talking with Denis he said he has been a race official for 35 years has learned that when you treat people with respect they respond in kind.

One great thing about SDW is the access to the pit area for so many fans.  Drivers and crews are always willing to talk a long as time allows.  With 300 racers, you see drivers that you may see only at big events.

We’ve see about every kind of weather during our tenure at SDW so on Saturday morning when we awoke to rain we headed to the track and ended up in Brian Carter’s pit area once again where we gathered under the shelter and huddled around the salamander heater to keep warm.  We were joined by Jay Fitzgerald, his crew and family and along with brother, Rich we swapped racing stories while waiting for the rain to stop. 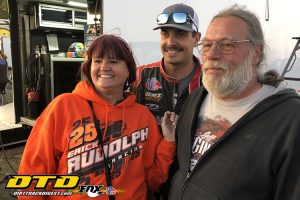 On Sunday after the 200 we ran into Ron and Diane, race fans of Stewart Friesen, Erick Rudolph and Ryan Susice who all come from the area in and around Ramsonville Speedway where they call home.  Diane had once worked at the track for the Friesen family. 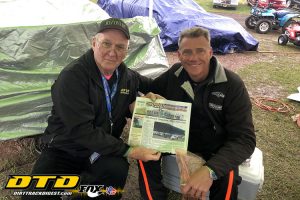 As Super Dirt Week closed out the fourth year at Oswego the local paper, The Palladium-Times, reported good news for fans of the historic event and a tradition that many racing families have passed down through generations will continue.  A deal is in the works says, DIRTcar CEO Brian Carter to keep the event at Oswego Speedway for the next three years.  Carter also said they are working on a deal that would keep the event in Oswego even longer and he is very optimistic.

The SDW event in Oswego was not the only big racing event for area fans this past weekend.  The 12th Annual Short Track Supernationals was held at Afton Speedway and Matt Sheppard of Savannah, NY became the 12th different winner of the Modified event and in doing so he moved closer to winning the $57,500 Sunoco Race Fuels/Insinger Performance “Grand Champion” title.  Sheppard has already won the American Racer Cup and only two events remain, the STSS South Region event on Nov. 2 at Georgetown Speedway in Delaware, and the North Region finale at Orange County Fair Speedway on Thursday, October 24.

Seven-time Fonda Speedway track champion, Bobby Varin opted for the Supernationals this past weekend and finished in the runner up spot in the Palmer Service Center No. 76.  2019 Fonda 602 Sportsman Champion, Tim HartmanJr., Niskayuna won the $2000 Short Track SuperNationals Sportsman event on Saturday in the Open vs. Crate Sportsman 30-lap event, his first career win at Afton Speedway. 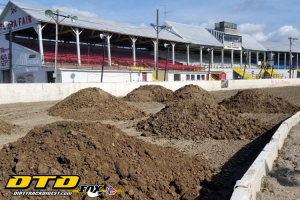 Fonda promoter, Brett Deyo continues his stewardship of the Track of Champions by taking advantage of the good weather this past week to start the resurfacing effort before the winter sets in.  Photo posted on Facebook.

As the local racing season winds down, the DIRTcar Modified Series moves to Brockville, Ontario, Canada a two-day event that includes, Sportsman and Pro Stocks.  Next for DIRTcar is the World Finals in Charlotte, NC on November 7-9.  Orange County Fair Speedway in Middletown, NY will host the 58th Eastern States 200 Weekend beginning with the Brett Deyo event, the Hard Clay Finale, Northern Region finale for the STSS, on October 24 and culminating with the Eastern States 200 on Sunday, October 27.

In closing we send our condolences to the family of Larry Dalmata who passed away on October 14. 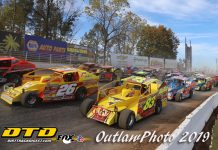 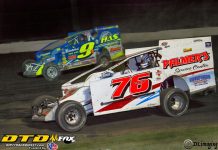 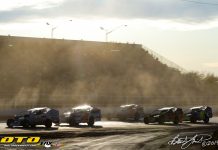