In heat one Bristol took the lead from Jessica Power on the fifth lap and crossed the finish line two-tenths of a second ahead of the Kingston, Ontario driver.

Bristol said, “It was a good race, but I wish I wasn’t in it. We came here and ran good until time trials and timed in tenth. In the qualifier I had carburetor issues and the restarts were just killing me. I think I picked up a couple of things tonight that will help us tomorrow.”


Rouse took the lead early and simply ran away from James Michael Friesen.

There was one major mishap in the race as on the first lap in the backstretch Travis Bruno, Julien Raymond and Griffin Mansmith piled in together and forced a couple of those cars off on the hook.

The winner is coming off a tough week and said, “The car was a handful tonight, but we’ve come a long way this weekend. Our time trial just wasn’t good, and we started out in trouble. But we’re in the show.”

The final qualifying race of the weekend saw Kerwin, who was driving the Buddy Pawlik car for only the third time this season, pass Cedrec Gaurveau on an early restart after Normand Hamel had spun between three and four. 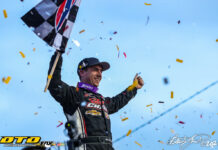 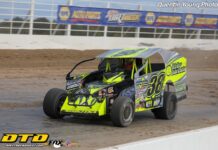 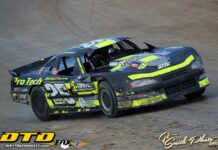