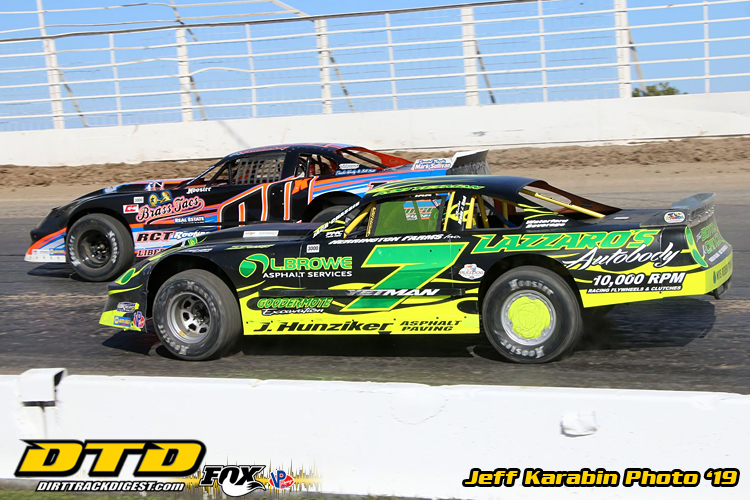 OSWEGO, N.Y. (October 13, 2019) – Josh Coonradt officially etched his name in to the history books on Sunday afternoon at the Oswego Speedway.  Coonradt kept all challengers at bay while surviving several restarts to win the Wilkins RV 50 for the DIRTcar Pro Stock Series at Super DIRT Week XLVIII.

“I’m speechless, that was awesome out there,” Coonradt said. “I kept looking at the leaderboard seeing who was there, guys like Horning and Yetman, and kept my head down. That was the longest last ten laps of my life with all the cautions. I’m glad that’s over because I couldn’t handle looking at the scoreboard any more.”

Front row starters Tony Markou and Josh Coonradt battled for the lead at the start of the Wilkins RV 50, with Markou getting the best of the battle early on.


Just as Markou finally put some distance between himself and Coonradt, Markou lost the handle and spun from the lead with 10 laps in. This put Luke Horning on Coonradt’s rear bumper for the restart, with Rob Yetman a close third.

While Horning and Yetman battled, Coonradt slowly pulled away, up to a few seconds by lap 20.

A lap 23 yellow for a few spins at the back allowed Horning and Yetman to close in on Coonradt, but Coonradt stayed on the point when racing resumed. As before, Horning was left to deal with Yetman, while Coonradt pulled away.

Defending race winner CD Beauchamp went for a lazy spin on lap 33, forcing the caution to fly. Horning got by Coonradt at the drop of the green, and Yetman was ready to come with him, but a pileup at the back negated the pass, handing the lead back to Coonradt.

On the next restart, Horning went around in front of the field, causing another large pileup.

Coonradt motored away from Yetman on the restart, but didn’t have much of a chance to build up a huge lead, as the red flag flew on lap 43 following a hard wreck on the frontstretch with Jay Fitzgerald and Rick Duzlak.

At the green, Yetman slipped to third as Sid Harmer drove to second, but another big pile-up made the yellow fly again on lap 44.

With five to go, Coonradt was pulling away from the battle between Harmer, Yetman, and Markou from the rear. Another yellow on lap 47 kept Coonradt in check, and the scramble for second now included a fourth car in Jason Casey.

A yellow for a four car stack-up at the tail of the field caused one last caution on lap 48, forcing a green-white-checkered.

Coonradt nailed the restart, ditching Harmer and others. Crossing under the checkered-yellow first was Coonradt for his first Super DIRT Week triumph. f

Can-Am regular Sid Harmer had a solid charge to snag second, but didn’t have the pace to challenge Coonradt.

“Josh was hooked up,” said Harmer. “I think I was an adjustment away from being where I needed to be, just too tight in the few spots where it took rubber. I just made sure to stay patient with some impatient people and it paid off.”

Tony Markou went from hero to zero following his spin from the lead, but went back to hero status after driving from the rear to third.

“That was my mistake, I just lost it in the middle of one and two,” noted Markou. “I needed to prove myself after that mistake, and after driving from the back to the front, thankfully I was able to do it. This is a dream come true to be this fast here.”