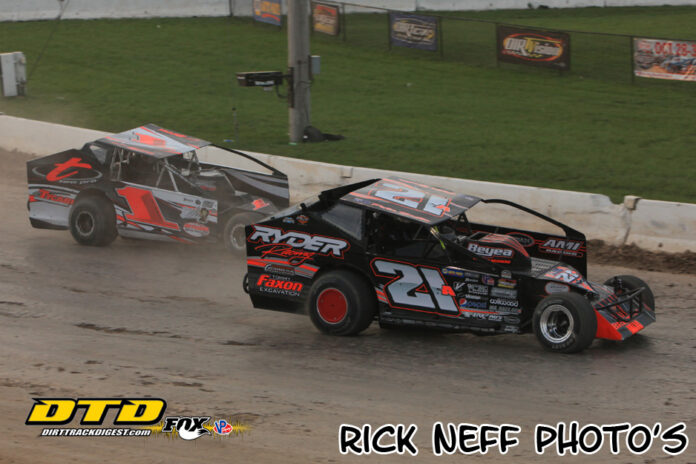 Out of all 41 drivers who started Sunday’s Billy Whittaker Cars and Trux 200, Tyler Dippel might’ve had the most eventful race. After a good Friday night run, Dippel started ninth in the 200 lap main-event. After riding and biding his time for the first 100 or so circuits, Dippel turned up the wick. Dippel charged from eighth into the top five, looking to set up a run for the top three.

That run quickly turned into a charge for the lead, as Dippel started to show a nose to Peter Britten, who was the leader at the time. However, they would come together off of turn four late in the race to effectively end both of their chances to win.

“Me and Peter were racing hard”, added Dippel. “The holes had us both bouncing. I caught one wrong and we hit.”

Dippel wasn’t going to go quietly, though. Dippel gave his all to charge back through the field. Dippel carried a devil-may-care attitude on the track, romping his Teo through the ruts looking for any possible grip advantage. He would charge close to the top five, but a late flat left front would set him back to eighth.


“We had an awesome car today”, said Dippel. “This car handled the holes very well. We could wrap the bottom with the left front well and the car wouldn’t get upset or try to tip. No one else could really do that, so it was a huge advantage for us.”

Dippel will look to carry this momentum in the Speed Showcase 200 next week at Port Royal.

“Damn, we were so close”, said Dippel. “We’ve been fast the last two months, and that continued tonight. I hope to keep this momentum going for the rest of 2021.”