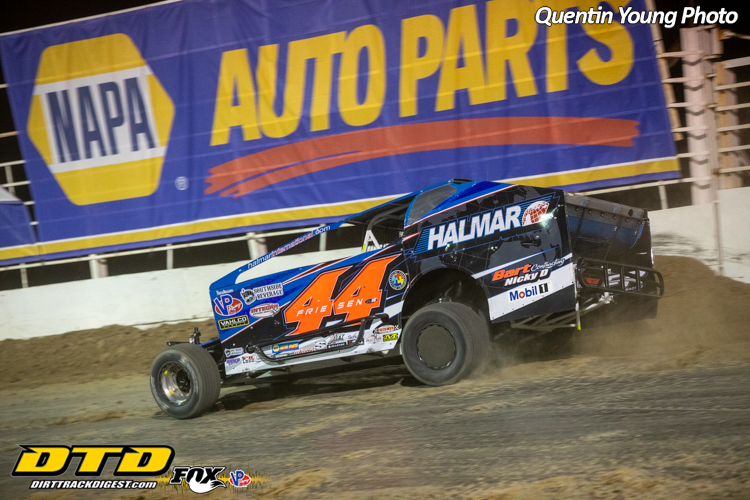 OSWEGO, NY – Stewart Friesen came out on top of a late-race battle in a wild Salute To The Troops 150, fending off all charges for the $20,000 victory and an Oswego Speedway trophy.

As said frequently this week, Mat Williamson took the lead at the start of the 150-lap grind, with Tim Sears Jr. putting heavy pressure on him in the early going. By about lap 15, Williamson was able to use lapped traffic to help get Sears off his bumper, leaving Sears to deal with a charging Larry Wight. Williamson’s quick pace through traffic was slowed by a lap 23 yellow, but giving Williamson clear track.

Like prior, Sears held close to Williamson before the next yellow on lap 35. This restart, Williamson wanted none of it, steadily inching away from Sears. Wight wasn’t applying much pressure to Sears, while initial polesitter Billy Dunn and Mike Maresca fought over fourth. A lap 54 yellow introduced strategy into the event, as Williamson, Wight, Stewart Friesen, and Billy Decker hit the pits, handing the lead to Sears.

Right off the drop of the green for the restart, Sears was under constant fire from Dunn and Maresca. While the top three battled, Wight was leading the charge of the cars that pitted, cracking the top ten on lap 65. Friesen wasn’t far behind Wight, while Williamson was mired significantly further back in the field. Up front, Sears got a couple laps of freedom as Dunn bobbled and hung up Maresca, but the break was short lived.


Dunn almost got under Sears on lap 77, and nearly drove around the top of him on lap 78. Sears barely hung on each time, and Maresca then took second from Dunn on lap 81. A caution shortly after stopped that battle up front, with Dunn heading to the pits. Sears and Maresca stayed out, with Anthony Perrego the new third place runner.

Before a lap 90 caution, Wight had climbed to fifth with fresher rubber. Sears and Perrego hit the pits under this caution, with Maresca now leading over Danny Johnson and Wight. Maresca went into defense mode, holding off Johnson and now Friesen, who went to third on the restart. Johnson led for about 50 feet before surrendering second to Friesen, who then went after Maresca. Behind this battle, Wight held down fourth, with Williamson clawing back to fifth.

Maresca kept Friesen behind him as the lap counter clicked past the century mark. With 105 in the books, Wight slowed with a broken right rear shock, making repairs but heading to the tail. Maresca and Friesen resumed their battle, while Williamson slid under Johnson for third.

Maresca favored the bottom of the speedway, while Friesen was pushing the limits of the top. Friesen closed in, grabbing a monster run off the top of turn two to blow by Maresca on lap 115. The yellow waived shortly after, as earlier leader Sears went off on the hook after being collected in a wreck. Maresca never let Friesen out of his sights in the next short run, hanging within three-quarters of a second before a yellow for Johnson on lap 125.

The green flag didn’t stay out for more than a few seconds, as Marc Johnson appeared to blow a left rear tire entering turn one. Sliding to a stop in the middle of one, a handful of cars piled in, ending with Dunn on top of Perrego. Despite having no left side door, quarter panel, or roof, and landing on top of another car, Dunn rejoined the field.

Yellow fever ensued, with quick yellows for broken cars and smaller wrecks bringing the field past the lap 140 mark. When racing finally resumed, Maresca wasn’t going down without a fight, drawing even with Friesen on lap 144. However, Maresca caught a hole wrong and lost a ton of time the next circuit.

Despite dropping back a ways, Maresca made one last run at Friesen, but came up a little less than half a second short at the drop of the checkered. With Friesen winning, Maresca came home second on track, but was light on the scales. Williamson inherited a second place finish, followed by Jimmy Phelps, Johnson, and Decker recovering from a late wreck. Dunn brought home his battered machine 12th to claim the DIRTcar 358-Modified Series championship.

“That was scary at the end there, I thought we were done with a lap to go,” Friesen said. “I came on the radio and told them good job, then found out we took the white and then about flipped. It was a tough track out there, but thankfully I got awesome guys that gave me a great car. I’ve been hammering on Billy The Kid about our small block program, and he did all the right things to give us a great piece.”

Williamson came home second, a fair ways back from the battle up front. An odd sentence to read, but Williamson will take home $10,000.

“That sucks for Mike, we weren’t anywhere near him,” Williamson noted. “I was surprised he made it all the way on fuel. We had a good car, just not enough to get up there and race with the top two. Hats off to my guys for giving me a car that survived the whole way, it was treacherous out there.”

Phelps capped off a rough 358 week with a podium. After blowing a motor in his primary car, Phelps never laid down a qualifying lap and barely transferred through the LCQ.

“I’ll be honest, we nearly pulled in early,” Phelps said. “I couldn’t see anything, and with the track really rough and the full load of fuel, it was awful to drive. However, my guys got me more comfortable on the pit stop, and life got better from there.”