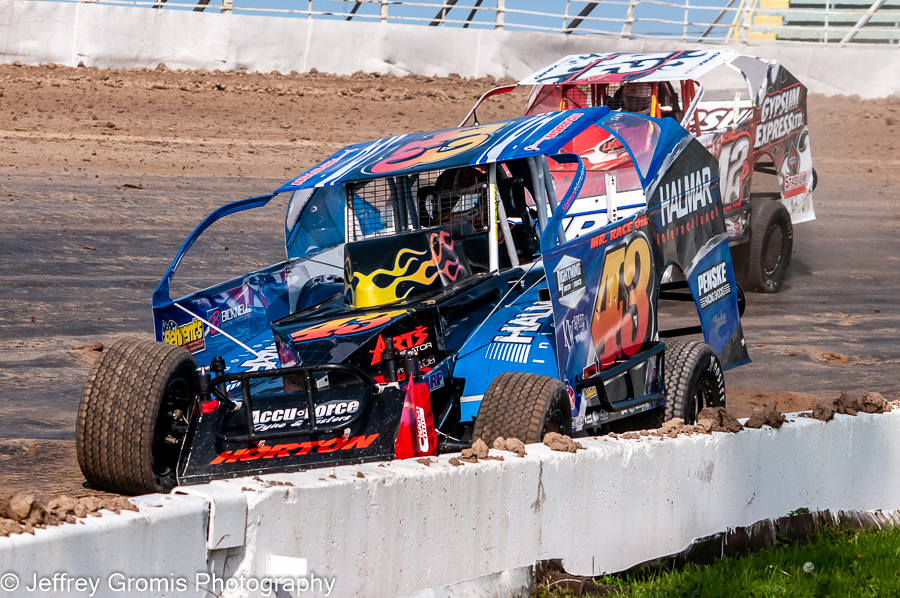 Other than maybe Danny Johnson, no driver has run more Super DIRT Week events that Neshanic Station, N.J., driver Jimmy Horton. This year Horton once again returns to SDW where he has won the big race two times (1987 & 1994).

However, this year Horton will not only be battling the competitors as he looks to make a return to the track for the first time since Saturday Sept 11th at Bridgeport Motorsports Park. The Sunday following the Bridgeport race, Horton was starting to unload his Halmar International No. 43. As Horton opened the door the cable snapped causing the door to come flying open pinning the veteran Horton underneath. When it was all said and done, Horton suffered two broken ribs on his left side forcing him to have to sit out.

“The cable broke on the winch that pulls the door up,” said Horton as he explained what happened to cause his injury. “I think it might’ve broke when we loaded the car up on Saturday night after Bridgeport, but I didn’t realize it.  The next day I was getting ready to unload the car, and the trailer sits in the driveway on a downward slant anyways, so the door is going to fly open.  I didn’t even have a chance and I wasn’t going to try and stop it, I was just trying to get the hell out of the way and it laid down across my back. Luckily it didn’t’ slam me as I was able to slow it down some.”

If anybody has ever suffered broken ribs before they know how painful it can be and there is nothing you can really do but let them heal naturally. Driving a race car on a dirt track probably isn’t the best thing to do, but Horton is veteran racer and he is not going let this stop him. I asked Horton if he had any trepidations returning to the seat so soon.


“Not really,” explained Horton. “The doctor said to give it four to eight weeks and I gave it three and a half and wanted to see what we got. We all sat and talked about it.  We thought about trying to go and race last week to see what it felt like, but we decided not to push it and wait and come here. The last few years the track has been fairly smooth, but as my luck would have it, they are saying the track is going to tear up. Either way, I think we will be alright. We’ve done this for years, so it’ll be okay. I hope!”

This will not be the first time Horton has ever raced while being injured or recovering from an injury.

“This will not be the first I have done this,” explained Horton. “Especially here at SDW. Back in 1983 I broke my wrist and totaled the car, so we bought Jack Johnson’s car to race. I was also scheduled to drive the Sprint Car that year also.  When I showed up at the track on Friday morning, Davey Brown who was the crew chief on the Sprint Car, saw my cast and asked how the hell you gonna drive this? I told him I don’t know.  I tried to drive it with cast, but I couldn’t so I came in and cut the cast off and said now I can. So, we ran the race and put the cast back on after the race was over.”

Horton was struggling the middle part of the 2021 season and decided to put together a new Bicknell they had purchased earlier and since then, Horton has looked like his old self. If it wasn’t for some mechanical breakdowns, Horton could easily have a couple of wins.

“The TEO car we were using was good and we had some good runs with it,” cited Horton. “We just couldn’t get the consistency out of it that we wanted to. Matter of fact, I had the Bicknell car for months just sitting there in the garage and didn’t want to bring it out because we were starting to run good with the TEO car, but it was the same deal, lady luck just wasn’t there for us. So, we decided to bring it out and it was better.  We started to run up front and it was still the same deal. We were top three every race and then we had a flat tire, a shock break, we had a bolt break on the driveline one night. We’ll see how it goes here.  The only other place we’ve run the Bicknell car is at Middletown so far, so let’s see how it does here this week.” 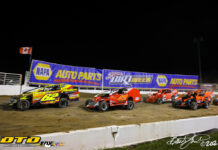