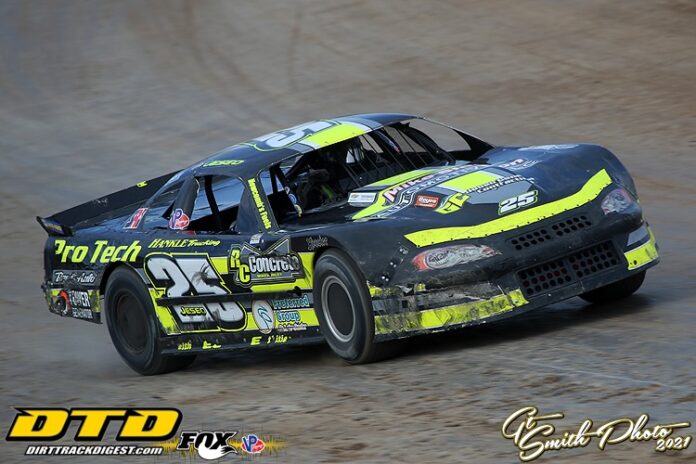 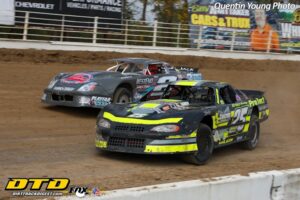 Luke Horning was your early leader in the 50-lap event, with Jeseo his main competition. Jeseo went door-to-door with Horning for quite some time, finally powering off the bottom to lead lap 10. Nick Stone slipped under Horning on lap 15 to take second, but Horning’s good run came to an end a few laps later against the inside wall.

On lap 20, Jason Casey snuck under Stone to reach the runner up spot, with Stone battling Rich Crane for third. This battle was short lived, as the biggest wreck of the event saw Crane land on his lid, out of the race and Stone to the pits.

Out front, Jeseo was making easy work of the field, with only Casey hanging within shouting distance. Scott Towslee scraped his way up to third, but a ways back from the top two. Jeseo worked traffic with ease, his only competition in the later stages.


On the last lap, Towslee got crossed up and surrendered third, barely keeping the car rolling. Rob Yetman continued his charge from the back and slid into third, but behind him, Chuck Dumblewski and Mike White got together, with White the one crossing the finish line. With Jeseo winning and Casey second, it was Yetman third, White fourth, and Towslee fifth.

“It was just a lot of patience,” Jeseo said. “Just with the track and cars, just being patient and not getting ahead of yourself was key. You just have to race yourself, when you get racing with others, it’s easy to lose track, but when you’re focusing solely on yourself, you just need to focus on not beating yourself.” 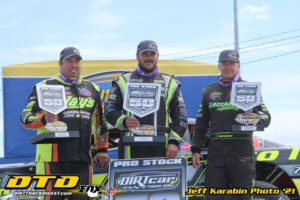 Casey had an uneventful race, riding in second the back two-thirds of the race en route to the runner-up finish.

“We were overheating, but I figured we were almost done so it was going to do what it was going to do,” Casey stated. “I just needed Chad to bobble, but his leaf springs got around here a little better than the coils I’m still trying to figure out. There’s no better feeling than a good run here, other than standing where Chad is.”

Rob Yetman had a tumultuous race, but took advantage of Towslee’s late issues to snag third.

“The way we’re hitting these corners, stuff is going everywhere and packing the radiator so I’m not surprised I’m overheating too,” noted Yetman. “I got dumped twice, but I knew this race would be really rough and tumble going into this so I’m excited to finish third.”