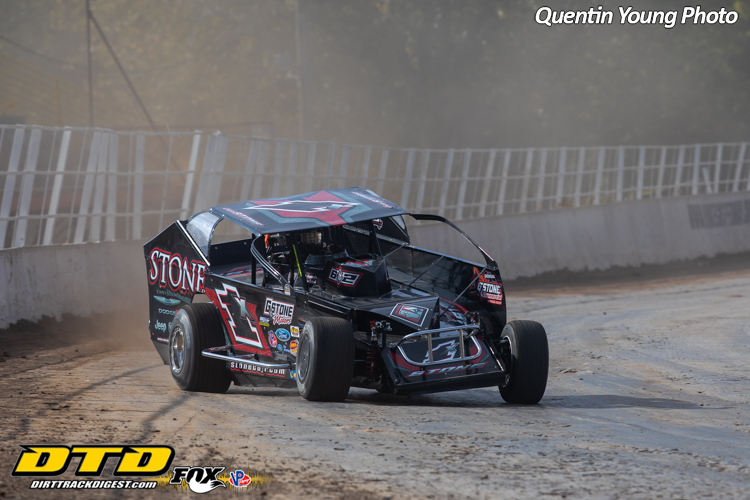 OSWEGO, NY – Middlebury, VT is a long way from Oswego.  There is simply not direct route between the two places, but Justin Stone found his way to the Port City and is mighty glad he came because he locked himself into Sunday’s 75 lap feature after timing 5th quick out of over 100 cars.

Not only had he never been to Oswego, but he also decided to make appearances at Weedsport and Brewerton, two other places he had never even seen.

Smiling as he stood alongside his trailer after the successful time trial session, Justin said, “We decided to go to Weedsport and we broke a drive phalange. We then went to Brewerton where we did pretty good. I’ve never been to any of these tracks and the drivers here run good and clean. It is fun racing and no one is touching anyone.”

Stone said, “We usually run at Devil’s Bowl (Vermont) and Mohawk and have had a pretty good year with six feature wins overall with four at Devil’s Bowl and one at Malta and another at Mohawk.”

While some teams came to Oswego looking for the win, Stone isn’t in that mind set.  “I am happy to start the race,” he said, “the rest is gravy.”

Continuing he said, “It felt good on my time trial lap and I went out with simply no expectations whatsoever.  In practice we were really good, came in and made some small adjustments and put down a pretty decent lap.”