Home Exclusive Columns Matt Sheppard and Rick Laubach Will Bring the Field down for Green... 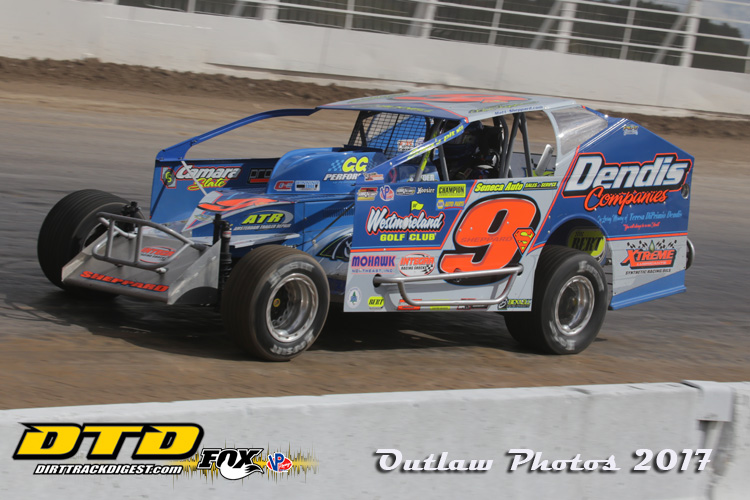 OSWEGO, NY – When the field of 55 cars took time for the big-block Modified portion, the drive standing ahead of the pack was Matt Sheppard. While that will come to no surprise to anyone, it was actually a little matter of luck that enabled him to lay down his lap of 21.210.

The time trail order was determined by times you laid down in the final three sessions on hot laps. Sheppard’s familiar #9s was mired in the back of the field. Long after his peers set down their time trial lap.

“I’ll tell you, we got lucky today,” dead-panned the many-time DIRTcar Champion, “We just couldn’t get the motor to run right all day and we were struggling. We made some adjustments and I think we got lucky that the track took a little rubber.

“The track did stay slick all day just until the very end of the times there and we happened to be going out at that time,” he went on. “It’s (the track) is a bit tricky, it’s definitely smooth but will it take rubber come Sunday is the question. I actually really don’t know.”


For Laubach, the very thought of entering Oswego was an almost last minute deal. Gary and Lori Herrmann didn’t have plans to field a car but when Ryan Alsdorf bought a new Bicknell for DIRT Week at the last hour he jumped at the deal.

“Lori hasn’t been feeling to well so they decided to take this year off for DIRT Week. Then Ryan called me and I’ll admit I said yes right then and there,” the driver known as Scooby continued, “Hey, it’s DIRT Week. It’s not Syracuse but when we came last year it was special.”

“This helps big time,” Laubach said on his outside pole starting spot. “We will sit down and put a strategy together. It’s definitely not lick last year, it will be more normal I guess you can say so we will see what happens.”

For Billy Decker who timed third it was momentum carried over from his $20,000 win last Sunday at the Fulton Speedway. “I mentioned last week at Fulton that I hope we were maybe carrying some momentum into this week,” said the many time Syracuse champion, “Sunday though is a whole new day but Mike (Payne) has given me a good car so lets hope we can put it in victory lane again.”

Keith Flach might have been a surprised fourth fastest time and he would echo that thought… some, “A track slick like this really isn’t my deal but we just had a good car all day,” said the Lebanon Valley regular. “I’m not sure if the track took a little rubber, it didn’t feel like it did. Hey, we were blessed to put some good laps in and the pressure is off some for Sunday.”

The driver with the biggest smile was Dominic Buffalino, the Jersey resident looked around and said…”Look at this, I don’t belong here!” he exclaimed. “I mean this is the first time I finished ahead of Tim McCreadie in anything!”

He continued about his run which was a total surprise, “We were awesome in the small-block but I just didn’t finish comfortable in the big block at all. I thought no way I would have put down the lap that I did. Hey, I’m just thrilled to death and we can now get ready for Sunday.”

For the second year in row, Tim McCreadie pulled off the feat of locking into the show on Thursday.  With his Lucas Oil Late Model duties having him running the Pittsburger at the Pittsburgh Pennsylvania Motor Speedway he needed to lock himself in on Thursday or the second generation driver wouldn’t be in the 200 starting field.

He did just that last year but with a smoother path. During hot laps to start the day, his Sweeteners Plus #39 found it’s way into the outside wall, not once, but twice.

“I have no idea what happened, I just drove it in the corner and it went strait to the wall, twice,” McCreadie said with a perplexed tone.  “It had to be something in the steering, we changed everything and made it out for our lap.”

But not timing for the timed warm-ups, McCreadie was in the last group. With the flare for the dramatic, his first lap under the clock, the scoreboard displayed #39 in sixth! His second lap was slower but it was once again mission accomplished.

“It does put some pressure on because If I don’t time top six, most likely I am not here in Sunday,” he continued, “We should be good Sunday, this car was new at Albany-Saratoga and it’s a good one. Now I just need to get this monkey off my back and win DIRT Week”.