Home Exclusive Columns Phelps Comes from Back to Front in Salute the Troops 150 –... 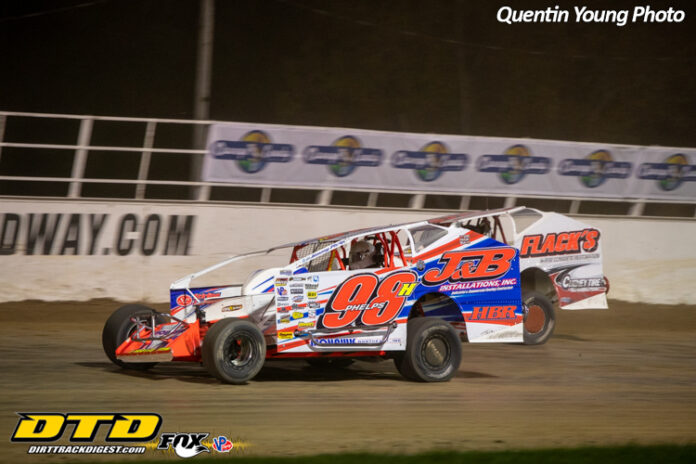 Jimmy Phelps has had an uneventful big-block portion of Super DIRT Week, qualifying second on Thursday and a stress-free Friday. The small-block was a totally opposite story.

On Thursday, Phelps lost a motor in his primary car and wasn’t able to lay down a lap in qualifying. The team had to grab their other car from Brewerton after the Hurricane Harvey 75, doing a hauler deal to bring that piece to Oswego.

After having a tough go in Friday’s Triple 20, Phelps had to run Saturday’s LCQ. A third place finish barely got Phelps a starting spot for the 150-lap feature, with Phelps lining up 35th.

After a long and grueling race, Phelps finished in third, passing all but winner Stewart Friesen and Mat Williamson during the course of the week.


“It was an absolutely tough show out there,” Phelps said. “It was slippery and rough. You’d spin the tires, hit a hole, hook up for a moment, then spin the tires again. It’s tough on our cars, tough on our bodies, we’re getting hit with stuff in there and bouncing around. It was the same for everyone, we survived, and pray we’ll be a little better for tomorrow.”

Usually, the primary focus of car setup is getting as much side and forward bite as possible. On a track like Oswego, that’s not always the situation, where driveability through adverse conditions became the primary focus.

“We’re not really adjusting for the grip like normal,” Phelps stated. “We’re hoping its good enough in the smooth but focusing on being good through the holes. It’s a totally different thought process and we just focus on being comfortable rather than fast. We were off at the start of the race with full fuel, but we worked on it and got it more comfortable for later.”

A full fuel load in a Modified is 24.5 gallons, and every car started the Salute To The Troops 150 near or at max fill. That’s a ton of weight behind the rear axle of the car and throws weight percentages for a loop.

“The full fuel always makes a difference, but tonight I thought it was huge,” noted Phelps. “Bouncing through the holes with all that weight over the back end really upset the car and we were ready to pull in early with how bad we were. The car is way free with all that fuel, you get a lot of tail whip effect with the center of gravity being moved back. It was tough to drive it early tonight.”

With 150 laps under his belt, Phelps looks forward to tomorrow’s Billy Whittaker Cars 200. Phelps is still seeking an elusive crown in this race, with near-misses highlighted by a flat right rear while leading with eight laps left in 2009, and finishing 22nd after leading an all-time high 155 laps in 2018.

“I don’t think we learned a ton to be honest tonight,” said Phelps. “We learned it was rough, but we weren’t fantastic and it’s just hard to gauge what we need to do. We just need to make sure everything is tight and hope for the best tomorrow.”