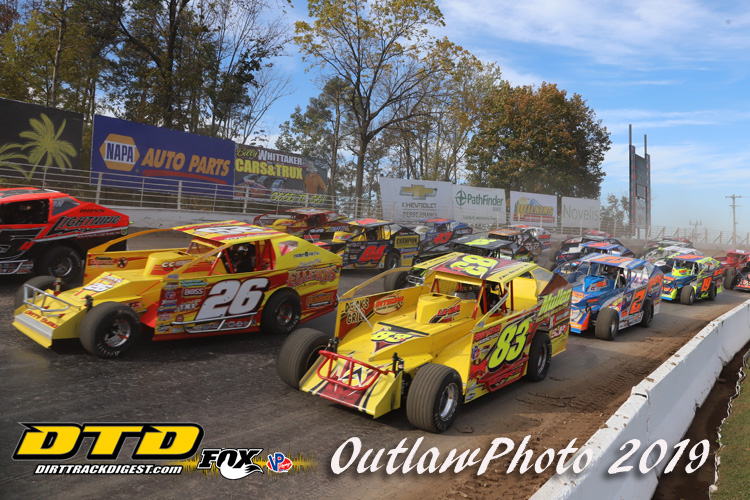 Super DIRT Week (and Outlaw Weekend) are over and now it’s time to look back at my 102 hours at a race track over those days and it is time to reflect.

Hype plays so much in sports and for the most part an event can’t always live up to its hype. This 200 wasn’t one of the better ones, but sunny skies and a breeze do nothing to help daytime dirt track races. We saw the old phrase “yellows breed yellows” dominate the day.

Drama was there at the end as with Mat Williamson pitting on lap 58 you had to wonder “would he have enough?” Well, he did and won by over six seconds.

Did anyone see the 88 cross the finish line or were they focused on SDW rookie Anthony Perego hanging on for dear life as he indeed was running out of fuel. Perego drove an outstanding race and didn’t deserve going from second to 13th on the final lap.


Brett Hearn hasn’t had a good 200 in a while, so after blowing an engine and sitting in the grandstands to watch time trials you had to wonder if he would even get in the show. He quit following the tour and had no safety net. He raced himself in in classic Hearn style. Then there was that third place podium finish. I don’t care if you are a fan of his or not, but you had to be pulling for him. In the back of my mind I simply think he’s winding it down and he will eventually be in a key role at Orange County.

Tim Fuller just keeps getting it done, but he was basically battling for fourth place with Ryan Godown, Chris Hile, Erick Rudolph and Jimmy Phelps with just 14 laps to go. Fuller appeared overjoyed with second.

Godown, who had heartbreak the year before, found himself as high as second in the late stages only to lose that spot with 15 to go. He settled for what I would think was a disappointing fourth.  He had lost radio contact for the later stages while also have the power steering let go late in the race.

Jimmy Phelps had a consistent weekend and appeared in good shape going into the 200. He eventually finished seventh after running out of fuel in the 358 event.

Stewart Friesen was a surprise not getting locked in on Thursday, but he started back in 31st and hard charged his way to sixth.

Oswego’s own Chris Hile was top three and challenging for second with less than 20 laps to go. It could have been a storybook finish as he settled for seventh. He wasn’t unhappy over the run, but to think what it could have been.

How much longer are we going to see Billy Decker and Jimmy Horton, the eighth and ninth place finishers? Horton has been in 40 plus 200’s and Deckers win in the 358 event on Saturday seem very popular among the fans.

Tom Sears Jr. started 11th and was as high as third in around lap 70. He got crunched up and in the end faltered, but rallied for 11th.

It was a relatively safe weekend until two cars touched in turn three and all hell broke loose on 121. Alan Johnson went over and came to rest on his top while Rob Bellinger hammered the third turn wall completely twisting the rear end. Also impacted were Billy Dunn, Peter Britten, Tim Sears Jr., Paul St. Sauveur and others.

Pat Ward is a trooper. He was shaken and possibly more after a bruising backstretch hit at Weedsport on Wednesday, but he ran all weekend long. I was told he was quite sore, but for a 60 plus year old he’s in good shape. He drove to 15th in the 200. Also without Jeremy Dygert lending Pat his car (which was formerly Pat’s car) the 42p would have been absent. The team stripped and basically rebuilt the car overnight from Wednesday to Thursday to go racing. There weren’t any cars left in Pat’s shop to run.

The 200 was not kind to two former winners as Larry Wight was eliminated in a crash in the first turn with another car and on 122 Matt Sheppard went off with a broken rear end after what could have been heavy contact with Michael Maresca as the duo battled for third place.

Danny Varin got knocked out of the heat after contact with Hearn. He fought his way right through the last chance race where he started 25th and raced his way to fourth to qualify. It was sensational to watch.

Billy VanInwegen was heartbroken after he missed the final qualifying spot, but he eventually was awards with the 41st position. It came well after an hour had passed after the race. It would have been the wild card race from Fulton spot so I guess someone got lucky. Sadly he finished last after dropping out on the 29th lap.

With a 90 point lead going in who could have thought that Williamson would pass Sheppard in the SDS point race. These double point races can be brutal.

I was covering the Sportsman for DIRTcar during the week and standing alongside Matt Janczuk on Tuesday night as he looked at his destroyed car was tough. Tom Juno had offered him a ride at Weedsport and Brewerton, but then shifted it to add Oswego. Matt, despite hitting the outside and inside walls in the closing laps, finished third.

The shocker was Kevin Root finishing second as he finished .9 of a second behind the winner.

Kyle Inman had an outstanding week as he had won the Outlaw and Brewerton, was third at UR and 10th at the ‘Port. He said of the week, “It has been the best of anything so far.”

Seeing Amy Holland qualify in her heat and then jump out of the car, run across the pits and hug her mom for a long, long time was one of those images that lock into your mind.

Sportsman put on a solid show and definitely belong at SDW. In think 102 cars tried to qualify for 36 spots.

Some drivers come to win, but realistically that isn’t always the case. As rookie Colby Herzog said to me after participating in the parade on Wednesday, “I have a slim to nothing chance of qualifying, but I’ve never even been to Super DIRT Week before, even as a fan. I want to do this.”

I have a soft spot for Colby as when he was nine or ten years old (and I was announcing at Brewerton) he would meet me at the gate every Friday night and say, “Bill, can I carry your announcing stuff to the tower?”

There is so much more about the weekend, but I need to reflect some off the track moments.

I had never worked with Chris Dolack of DIRTcar before. He sat in the media tent and formulated the media plan for the organization. He set up 5 a.m. interviews with TV and convinced Ryan Godown to not only get up, but take his car out for the cameras. He was a classy guy to work with. I’ve enjoyed working with Jordan and Joe in the past as well as Cristina and it was fun to be part of their team.

The DTD team is simply amazing. Here you have a team of younger guys and they accept this older guy into their fold. Prior to retiring five years ago, I never had the chance to immerse myself in SDW. These guys let me to my thing and continue to do what I love to do….write. Many thanks to Mike Mallett for welcoming me. It was also a joy to work with Todd Buffenbarger of TJSlideways.com for the first time and with Kenny, Bobby, George, GT, Brent, Adam, Quentin, Connor and others. The dedication of all these folks (and all the other media people from other organizations) provides up to date, behind the scenes and results for those who just can’t be part of the SDW experience.

SDW isn’t just the drivers as it’s the teams that load up the mules and four-wheelers for the parades back and forth to the infield, for their exhausting time spent with little sleep, to the track officials and to the employees who are down in the trenches, as well as the team that puts the track down. This simply doesn’t just happen. You don’t open the gates and they will come. This is work, hard work, which is done for fans to experience something they could not experience elsewhere. For most people it is a work of passion, not a full time job.

I’m a little concerned about the 358 satellite fields as 29 at Weedsport and 24 for the Hurricane. Not an expert in the area, but maybe with Sportsmen teams moving up we are in a one car one motor scenario thus the number of laps put on a car might be too much. Someone said to me, “If we run the 358 all week we are halfway to the laps to rebuild and engine”.

The only complaint I have is that there are simply too many four-wheelers and golf carts as well as persons who have no place in the pit area. A solution has to be found. There were times it was simply gridlock in the pit area. I saw kids as young as 10 driving around on four-wheelers as well as some folks who might have partied a bit too much. There is no easy solution.

It was 102 hours of my life that was full of joy and simply exhausting.

There are so many things to reflect upon.