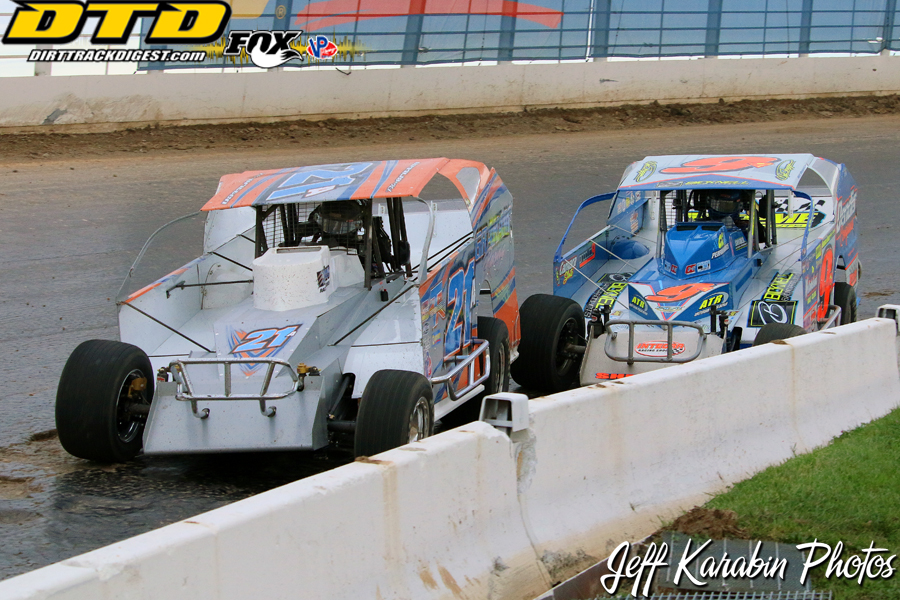 OSWEGO, NY – Matt Sheppard started on the pole of the Billy Whittaker Cars 200 at the Oswego Speedway and won, but it was far from easy for the Waterloo, N.Y., driver as it took him the full 200 laps to get back and catch Peter Britten.

“What a race,” Sheppard said in victory lane. “It locked down really hard early on, but the track did a complete 180 on us. It ended up being a really good race. I’m just glad it was 200 laps and not 199.”

Picking up right where he left off yesterday in the 358 race, Matt Sheppard held the lead in the first laps, holding steady over Rick Laubach and Billy Decker. A first yellow for Dominic Buffalino’s motor seizing kept Sheppard in check, but Sheppard completely ditched the field once racing resumed.


Flach inherited the lead when the racing continued on lap 67, but didn’t hang on for long. Haers skated past for the top spot two laps later, followed by Hearn, Sheppard, Tomkins, and Decker. The move most definitely failed for Flach, as he slid all the way down outside the top 20 before drawing a yellow with a flat right rear tire on lap 81. Hearn pitted under the caution, moving Sheppard to second.

Haers and Sheppard continue to run one and two as the race neared halfway, but all eyes were back in the pack. Billy Whittaker and Peter Britten had found a top lane that was previously thought to be non-existent, and Britten charged from the middle of the field up into ninth before a lap 97 yellow. Haers relinquished the lead under pacing, handing the lead to Sheppard on lap 101.

Seemingly all hope was lost. The track had rubbered up, and the bottom was seconds faster a lap than any other lane. However, the yellows allowed the track to get dirty, and the hot tires under pacing changed the track completely. In two laps after the restart, Britten flew from seventh to second on the top, with Whittaker latched to his tail.

On lap 104, Britten pulled the trigger and blasted around the outside of Sheppard for the lead. Behind him, Whittaker raced up to third, also up top. Jimmy Horton slowed on lap 110 to draw the caution, now with a two lane track.

Whittaker launched to second on the restart, and Danny Johnson climbed to fourth. What was a freight train track a half hour ago now allowed The Doctor to throw a slide job on Sheppard for third. Behind them, McLaughlin, Friesen, and especially Wight rocketed from the back to the top ten on the cushion. Flach’s bad day got worse on lap 122, as he slowed with more issues.

Britten led the field to the green once more ahead of Whittaker and Johnson. Speeds slowed a few laps later, as Rich Scagliotta and Jimmy Phelps got together, collecting Frank Cozze. On this restart, Wight went to fourth, passing Sheppard. Danny Varin did the same the next turn, and Friesen followed. Wight claimed third on lap 144, then second on 146, the same time Friesen got to fifth and Sheppard had slipped to tenth.

A lap 150 yellow for Laubach’s motor issues brought the field together again, allowing Sheppard, Decker, and others to pit. Friesen and Johnson exchanged slide jobs on the restart, with Friesen getting the spot before Jessey Mueller caught the wall hard on lap 154.

As the lap counter passes 160, it was Britten with a small lead over Wight. Whittaker and Friesen battled for third, while the pack had became a hornets nest. A violent wreck on lap 171 involved Rudolph, Decker, and Marc Johnson. Rudolph and Decker drove away, while Marc Johnson’s car was destroyed from the violent hit into the turn one wall. Meanwhile, Matt Sheppard had charged from the mid 20’s to ninth with 25 laps remaining.

Matt Sheppard moved to fifth on the lap 177 restart, then to fourth on 179. Britten continued to fend off Wight, as Decker slowed with a flat tire on 180.

Peter Britten got a good restart and walked away from Wight. With 15 to go, Friesen and Sheppard begun battling for third, with Sheppard taking it on lap 187. With the laps ticking down, Britten’s lead was shrinking, and with seven laps left, his lead was almost gone.

On lap 194, Larry Wight darted under Britten and stole the lead, but Britten crossed him over and got the spot back. The crossover cost Wight second, as Sheppard drove under him on lap 195. Sheppard closed in, stalking the Australian. Both drivers ran the bottom, but on the final lap, Sheppard moved to the top entering turn one.

Sheppard drew even with Britten, and cleared him down the backstretch. With a clear track the last two turns, Sheppard claimed the hard fought win in the Billy Whittaker Cars 200 and the $50,000 payday.

Obviously, Britten was disappointed after leading so late and not taking the win. However, Britten still ran a phenomenal race.

“Congrats to Matt, it was a great race,” Britten said. “If I could have caught that lapped car at the end at a different time, maybe it could have been a little bit different. These wins don’t come easy in a big race like this, we’re here to stay and we’ll get them next year.”

Wight led late, six to go to be exact, but the young driver found himself third on the podium at the finish.

“It took three-four laps on our tires to really get moving,” said Wight. “That’s where it was good to be second, so I can maybe see a hole and go for it. Every time I had a run on Britten or got a wheel alongside him, we got a caution. Just too many cautions for our tires, and they ended up sealing at the end.”

Defending Friesen finished in the fourth position while Phelps came on late to finish in position five.