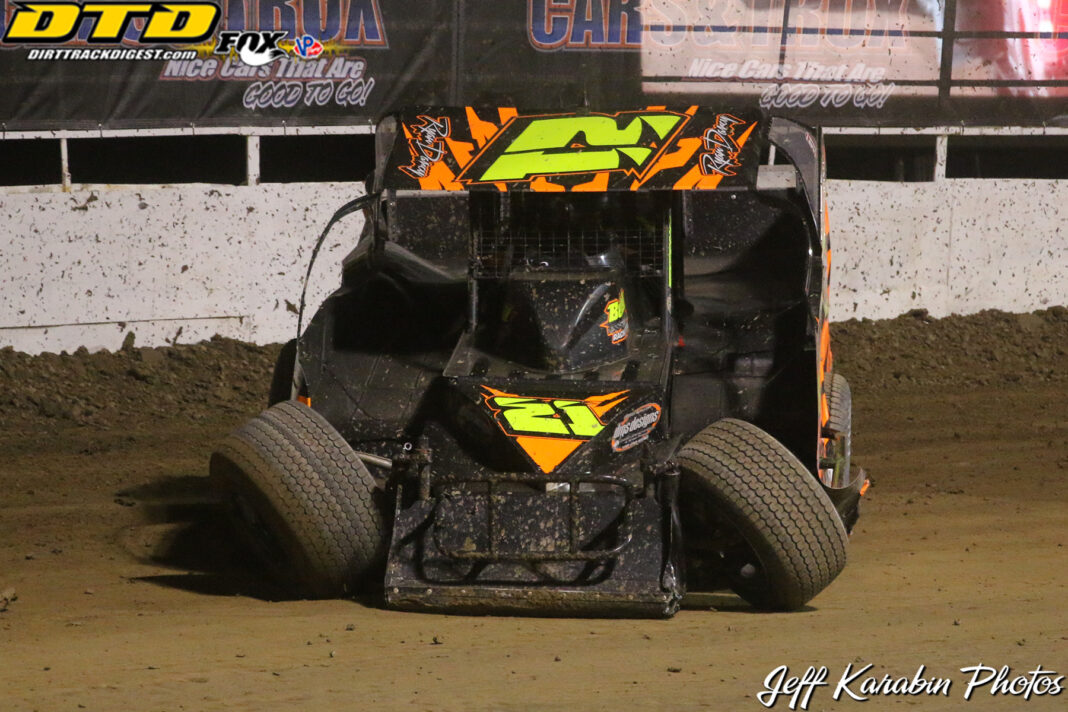 Super DIRT Week qualifying is always an intense affair. Whole seasons can be made or broken with one mistake or miscue. In 358-Modified qualifying on Friday night, tempers flared across both ends of the field.

The largest flare-up of tempers on the night occurred over two separate incidents in 358-Modified heat number one. Ryan Darcy and Bob Henry Jr. were racing for position into turn three, when contact was made that would send Darcy into the boiler plate, ending his night. Henry was able to continue on and finish the race. After the race, there was an altercation between the two as Henry returned to the pits.

“We made a few mistakes in time trials that put us deep in the heat race,” said Darcy after the race. “We had a great car that we felt could qualify, so the ending was incredibly disappointing. I don’t have a lot to say really. I considered him a friend, and he did not race me like I felt a friend would.”

Henry was equally as disappointed by the event.


“He was on the inside, I did not give him a lot of room but I tried to give him enough,” said Henry. “I gave him enough room so he wouldn’t get into the wall. We went down into three and he just ran into us. It really sucks for this to happen, it’s not the way either of us wanted our night to go. I’m happy that we were at least able to finish without getting stuck in a last chance qualifier tomorrow.

At the conclusion of the heat, Billy Dunn and Stewart Friesen played some bumper tag. Friesen made contact with Dunn after the checkered. Dunn returned the favor in due part, giving Friesen a stout shot that about wrote off bumpers for both drivers. The reason, though, is a bit of a lighter one.

“I didn’t realize the race was over,” said Friesen. “I thought he broke, I tried to go around him and accidentally tagged him. He hit me on the cool down lap, so I hit him back. It’s something we can laugh off, not a big deal.”

Dunn had no idea why Friesen got into him.

“Friesen ran into me pretty hard off of turn two after the checkers”, said Dunn. “I got back into him after to repay the favor. Apparently, he didn’t realize the race had ended, so it is what it is.”

The stakes will be even higher tomorrow as the 358-Modifieds prepare for Saturday night’s Salute to The Troops 150.