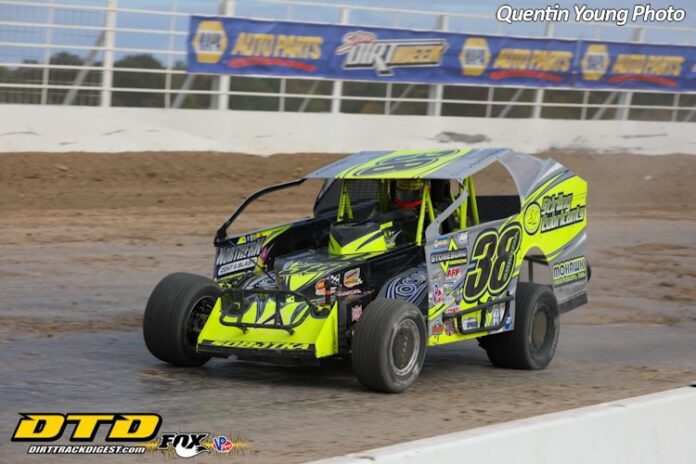 OSWEGO, NY – Zach Sobotka charged from the middle of the pack to score an exciting win 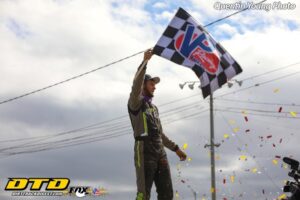 in the Chevrolet Performance 75 at Oswego. After starting 19th, Sobotka took the lead on lap 54 and held off Matt Janczuk for his first Super DIRT Week win.

Chad Edwards showed the way over Andrew Buff and Janczuk in the opening stages of the event. The first half of the event was relatively tame up front, with Buff never close enough to mount a serious charge on Edwards. Janczuk hung within shouting distance of Buff, but was busy holding off Alan Fink for third. 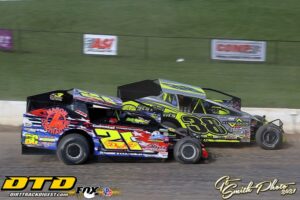 The man on the move was Sobotka. After starting 19th, Sobotka went on the charge from the drop of the green. When second place Buff slowed with a broken right rear shock, this put Sobotka in third. With most opting for the bottom, Sobotka was making his money on the top, moving by Janczuk for second on lap 51. Just as he reached Edwards to battle for the lead, Edwards slowed with a flat right rear on lap 54.

Once out front, Sobotka settled into a more traditional lane that mirrored Janczuk’s. Through the next set of short runs, Janczuk never let Sobotka get away, keeping him within a handful of car lengths. With about ten laps to go, Sobotka once again started to move his line in turns three and four off the bottom, and Janczuk closed. With about five to go, Janczuk was on Sobotka’s bumper. 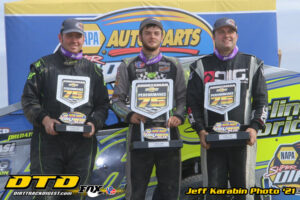 Sobotka moved back to the bottom in turns three and four in a defensive move, and at the end of the 75-lap grind, it was Sobotka taking the hard-fought win. Janczuk came home second, followed by Brian Calabrese after a late charge. Justin Stone ran top five all race to finish fourth, while Alex Payne notched his first Oswego top five.

“We were really bad in qualifying and our heat,” Sobotka said. “But we never really touched the car, we just left it alone and let the track come to us. To come from that deep is incredible and shows how good we were, we just survived the first 40 laps and next thing you know we’re up there battling for the win.”

Janczuk nearly scored the win in 2019, and almost did so again this year.

“Zach just had a better car than us,” Janczuk noted. “When he went by us up top, I think it helped us in the long run because he showed us the middle to top in turn one was smoother and easier. We saw how much speed the track had the past two days, and we just left it a little too free for the race today.”

Calabrese moved from ninth to third over the course of 75 laps, and was extremely excited given his circumstances.

“I saw where Zach started and figured he had to be running somewhere different to get up there,” Calabrese said. “We did this week on a budget, no new tires and our left rear is dry rotted. We did a lot with a little this week and I’m so excited to run this good.”