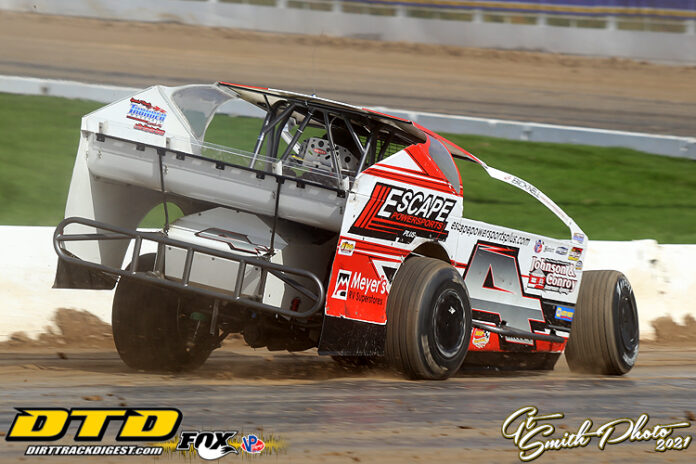 It has always seemed to be a struggle for Billy VanInwegen to qualify for NAPA Super Dirt Week 200. The personable driver out of Sparrow Bush, N.Y., loves coming to race up north at the Oswego Speedway and does manage to make the show most years, but it usually involves having to qualify through the non-qualifiers race.

Not this year.  VanInwegen qualified solidly through his heat race to lock himself into tomorrow’s Super DIRTcar series NAPA 200. This year for the first time ever, VanInwegen also brought along a 358 Modified and was able to qualify that car in his heat for tonight’s Salute to the Troops 150. For VanInwegen, it was a relief to have both cars locked in instead of having run the non-qualifiers race.

“We are pretty proud of that,” said VanInwegen as his crew prepared the team’s 358 car for the Salute the Troops 150. “We came up here knowing that what we had this year compared to years past when we came here.  It was better than we had and I usually end up struggling to get in this show. Our main goal was to get in and not have to run the last chance qualifiers and not have the usual last-minute stress I am used to when I race here. I’ll tell you what, it sure feels good to not have run the last chance race this year.

“We didn’t time trial the best but both cars raced well. We were missing a little bit of speed on Thursday, but seemed to find that little extra speed we were looking for in Friday night’s heats. We will start 23rd in both races and hopefully we can even get some more speed and go from there.”


In his big-block race VanInwegen started the race out of a qualifying spot and managed to make some moves throughout the race to qualify.

“Obviously running the small-block race, which is something we have not done before, helped us going into the Modified heats.” explained VanInwegen. “So, when the green dropped for the big-block heat, we knew what we had to do to get going. I was able to pick a couple of guys off early and threw a couple of slide jobs like I was sprint car racing. It was fun.”

This season, VanInwegen made the decision to concentrate on the Modifieds and reducing the number of Sprint Car races he ran, and it seems like that decision has played to his favor.

“This year we only ran about 10 Sprint shows as that schedule was different than in the past,” cited VanInwegen. “Mike VanDusen and the No. 56 Sprint Car guys always give me a great race car. We did run about eight to 10 shows and had some top 10s but my main focus this year was to concentrate on our big-block effort at Orange County.

“We ended up fifth I think (in points).  I am pretty proud of that when you look at the top four guys that finished ahead of us. We are looking to step up our motor program for next year.  Joe Barbagallo has stepped up and we are getting a brand-new big block engine. We had hoped to have it for this week, but pistons are hard to get right now so hopefully we can debut that in Florida and hopefully that can get us started good next year. Our big block car drives really good but are just lacking a little in the motor department.”

Comparing VanInwegen’s team to the big teams like Halmar, Gypsum and HBR is like comparing a Cadillac to a Chevy Malibu, but hard work can make up for a lack of funds and this team works as hard as any team to get what they can out of their cars.

“We are definitely a family deal,” mentioned VanInwegen. “We have a lot of friends that chip in, a lot of great friends that I couldn’t be more thankful for what they do for me. We have a family of sponsors that chip in as well and it is just a lot of fun. This weekend is a lot of stress, and it is very rewarding when we do well. I cannot thank Joey Barbagallo for what he does for me, he has been a great supporter of me for most of my career and he is the most easy-going car owner you can ask for. By no means are we anywhere near the teams that are parked here on the front row, but it’s cool we can run with them.”

As for his 358-Modified deal, that came together with the help of another friend.

“A good friend of mine Matt Regatti owns the 358 car. He just got this car, he has run legend cars and decided he wanted to put this car together out of our shop. He has raced it as Sportsman car this year but then he got a shoulder injury, so it has just sat here up on jackstands. He then ask me why don’t we put something together for Oswego and some of the other season ending races.”

His small-block did not end the way he had hoped as he dropped out on lap 99 and finished 26.  He still has one more opportunity for a solid run on Sunday afternoon.