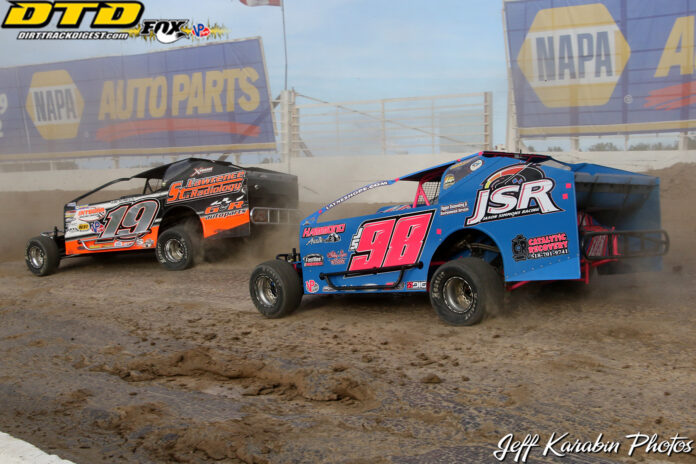 Despite being battered and bruised, Rocky Warner toughed it out on Sunday and by doing so was the top finishing rookie in the Billy Whittaker Trucks NAPA 200.

“Man, my body and legs hurt after that one,” said Warner while sitting in his hauler trying to relax after the race. “It was a tough race for sure, I got pounded with rocks or chunks of clay or something. You know, probably for the first 60 to 70 laps I thought the track was okay considering what it had been then after that it started tearing up pretty bad.  At that point it was not so much about finding speed but just trying to avoid the attrition and finishing the race.”

The Jason Simmons Racing No. 98 team had a plan going into the race, and despite the adversaries of the track, the team was able to accomplish what they set out to do.

“Our goal was to have a top 10 finish,” explained Warner. “We didn’t have a quick fill fuel system, so we sort of winged it to try and make things happen as we went. Our goal was to pick a few of the top guys like Williamson or Friesen and pit with them but I don’t think they had a game plan either and I didn’t want to get stuck out there a long time. I told the crew I needed to pit before lap 100 so I didn’t get caught at the break not being able to change tires. After we cycled through the pit stops, we were sitting there in around the 20th spot and were able to work ourselves back up to a top ten finish.”


As the race went on, another issue popped up which caused a hardship for the team as Warner lost radio communication with his team.

“After about lap 80, we lost radio contact, so we were forced to just wing it,” cited Warner. “We tried using hand signals at that point and I guess it all worked out in the end.”

For not racing big-blocks too often, Warner and his team were happy with their overall finish and how the team performed.

“Yeah, I think we all kind of feel good about our day,” said a relieved Warner. “The car owner is happy, the guys on the crew seem happy, I am happy. I know it is not a win, but in a sense, it is a win for us. Were kind of a smaller team and we definitely don’t have any engineers or paid pit crew help but we have a real good group of guys and we all like to have a good time and have fun and I think we did that today. Finishing seventh is astounding for us, it’s our first ever big-block race at Super Dirt Week and I am guessing I will be rookie of the race, not really sure though. But for me, to finish where we did in seventh in our first big-block race here just astounds me. It felt good to be competitive with the best drivers in the business.”

Warner and his JSR team will now check over the car and start preparations as they look towards heading to Port Royal on Thursday. 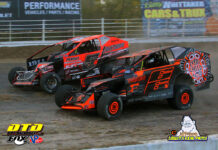