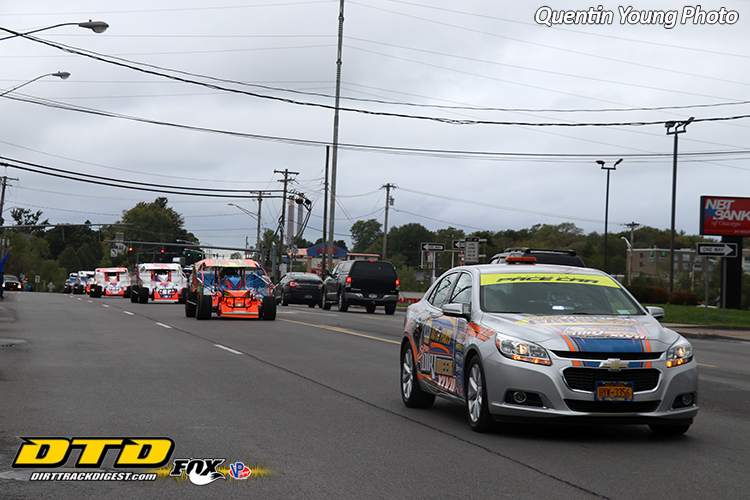 OSWEGO, NY – The massive undertaking of converting the Steel Palace into the Clay Palace for the 49th NAPA Auto Parts Super DIRT Week is complete and Wednesday’s “DIRTcar Day” kick off celebration awaits.

However, with persistent rain the past few days at Oswego Speedway, officials have been forced to cancel Wednesday’s practice sessions to preserve the race track.

All other Wednesday events remain on schedule. Speedway gates will open at 7:30 a.m. (ET) for campers and race teams with tech inspection at 8 a.m.

At noon Wednesday — aka DIRTcar Day in Oswego! — the Parade of Power rolls through the streets as residents will hear the rumble of Super DIRTcar Series Big Block Modifieds, DIRTcar 358 Modifieds, DIRTcar Sportsman Modifieds, and the full-fendered DIRTcar Pro Stocks all along the parade route followed by a special announcement in Civic Plaza near City Hall at 12:30 p.m. with City of Oswego Mayor William Barlow.

Be sure to download the NAPA Super DIRT Week app to stay up-to-date with the schedule and news.

For those partying at Oswego Speedway be sure to head over to the Island Stage LINK for a party with DJ Rick Uhl from 9 p.m. to midnight.

With hundreds of campers already set up at Oswego Speedway it’s clear NAPA Super DIRT Week is well underway, and on Tuesday, Oct. 5, all eyes will be on Brewerton Speedway for the Super DIRTcar Series’ $10,000-to-win Demon 100. Stars like Matt Sheppard, Billy Decker, Peter Britten, Mat Williamson, and many more will battle for the big payday. Also on the card at Brewerton will be DIRTcar Pro Stocks, who have only been to Brewerton one time with the Series when Louis Jackson won in 2009. The Demon 100 will also be the final chance for a Super DIRTcar Series and DIRTcar Pro Stock competitor to secure a guaranteed NAPA Super DIRT Week starting spot.