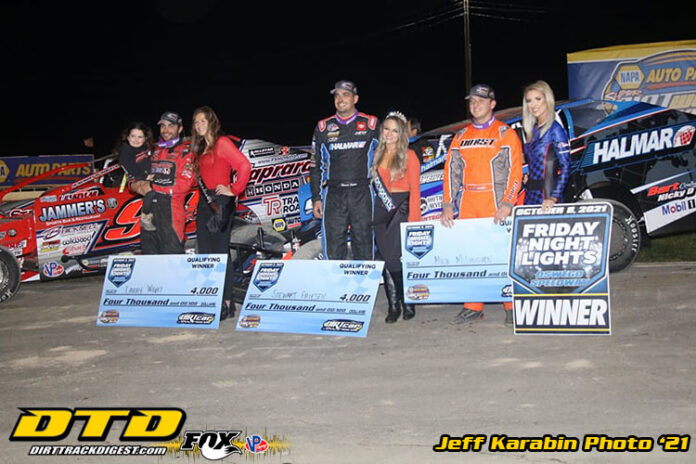 A large part of Sunday’s Billy Whittaker Cars 200 field was set on Friday night, with Larry Wight, Stewart Friesen, and Max McLaughlin taking wins in the Triple 25 qualifiers. Nine cars in each punched their ticket to Sunday’s show, with the final few set during Saturday’s LCQ.

It was Wight over Carey Terrance and Mat Williamson at the start of the first 25-lap event, and once racing finally got going after multiple rough starts, Wight was gone. Terrance ditched Williamson to be comfortably second, but Wight was out by a straightaway. 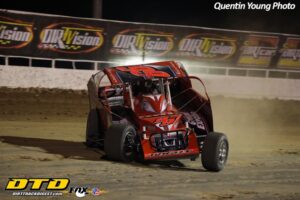 A lap 18 restart proved poor for Terrance, as he hopped the cushion and dropped outside the top five. With Williamson in second, his new challenger was Tyler Dippel for third. Behind them, Anthony Perrego and Ryan Godown were making steady progress through the pack, but out front, it was all Wight. Wight crossed the line first after 25 circuits, with Williamson finishing second, Dippel third, Perrego fourth, and Godown fifth.

“It was a good test to see what our car can do,” Wight said. “Different restarts, different lines to run, it gave us a good view of what we got. The repeatability of this car was incredible, we didn’t have to run through the rough stuff. We just drove straight through the black and the car was hooked up. I think we got a good shot tomorrow, and an even better shot Sunday.”


Jimmy Phelps led at the drop of the green in the second 25-lap battle, with Friesen and Tim Sears Jr. hot in tow. Friesen never let Phelps get far out, and after switching to the bottom after a handful of laps, began reeling him in. On lap 9, Friesen got through the bottom of turns three and four very well, and Friesen took the lead. 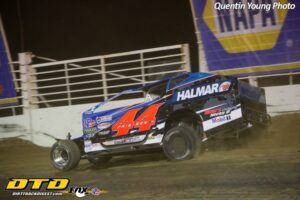 With Friesen out front, Phelps, Sears, and Tim Fuller fought over second. On late restarts, Sears and Fuller swapped the third spot, but with them going back and forth, Phelps was able to keep them at bay. With the checkered in the air, it was Friesen winning the second Triple 25 over Phelps, Sears, Fuller, and Marc Johnson.

“My guys have been working hard all week, and we got two great racecars,” noted Friesen. “Happy to be back at the Steel Palace for another great event, we’ll see what the track does tomorrow and adjust accordingly for Sunday.”

McLaughlin and Matt Sheppard ditched the field at the start of the final qualifier, driving away from Pat Ward in third. As McLaughlin and Sheppard carved through traffic, Ward was 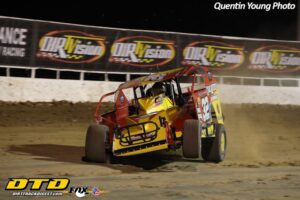 playing defense on Chris Hile for the bottom step on the podium. Hile finally got the spot at halfway, but by this point, Hile in third was a half track behind McLaughlin.

A late yellow as Gary Tomkins broke while running in fifth saved many frontrunners from being lapped, as McLaughlin put eighth on back down a circuit. A slider by Hile nearly netted him second, but Sheppard responded quickly and held the spot. After the final few laps, it was McLaughlin winning over Sheppard, Hile, Demetrios Drellos, and Rocky Warner.

“It’s pretty wild out there,” McLaughlin stated. “We were doing a lot of dodging holes, but where it was smooth we got a good idea of our car and this thing was working well. It was hard to keep the right front out of the ground, we were a little too low for these conditions but I’m sure the track will be better later in the week.”