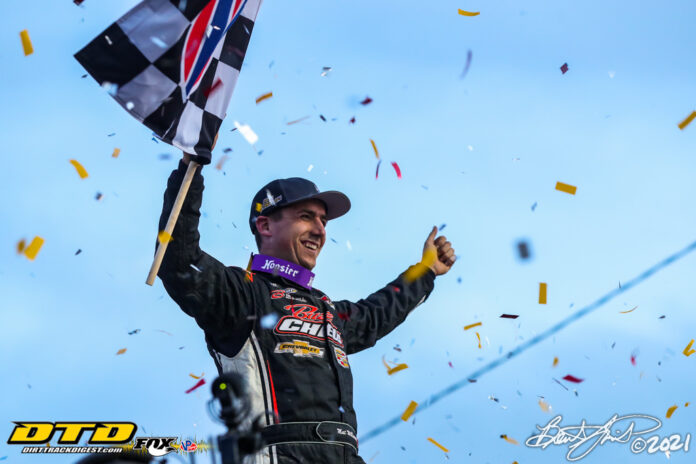 OSWEGO, NY – Mat Williamson returned to Oswego Speedway victory lane, taking the lead at the three-quarter mark of the Billy Whittaker Cars 200. Once out front, Williamson drove off into the sunset and score the $50,000 triumph to cap off a very successful Super Dirt Week for the Williamson teams. 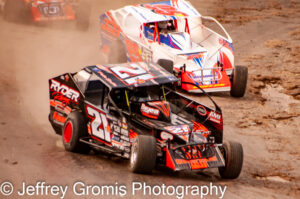 Peter Britten and Jimmy Phelps were the pair up front to start the 200-lap battle, with Larry Wight getting by Max McLaughlin early on. Williamson worked to fourth by McLaughlin as the lap counter clicked 20, with 358 race winner Stewart Friesen entering the top five too.

Friesen showed some good speed in the first stages, disposing of Williamson to climb to P4 on lap 30. Phelps wasn’t giving any breathing room to Britten, within half a second as the duo hit traffic. A lap 39 yellow gave Britten a chance to catch said breath, and under this yellow, Williamson was the first frontrunner to hit the pits for fuel.

Britten and Phelps seemed to have the top two spots on lock for the moment, comfortably out front as the lap counter hit 50. Behind them, Wight and Friesen raced for fourth, with Mike Maresca trailing in fifth. Things remained relatively calm up front through this stage of the race, with Britten riding clean through lap 75.


Maresca was the next frontrunner to pit, heading in on lap 92. Meanwhile, Williamson was back to sixth after his stop, while Matt Sheppard had climbed to eighth after multiple stops. Tyler Dippel was making major ground, passing Friesen and pressuring Wight for third at halfway.

As Phelps was increasing pressure on Britten for the lead, he slowed from second with a left front flat tire. With Phelps pitting, this put Wight and Dippel into second and third. Wight put quite a bit of pressure on Britten for the lead, just before taking it to the pits on lap 125 to change three tires. This put Dippel into second and Friesen to third.

Friesen didn’t stay in third for long, as Friesen bounced and spun entering turn one on a lap 133 restart. Now, Williamson was back to third, followed by Decker and Sheppard. As the lap counter passed 140, Britten was the only car left on track that had yet to pit, and it was beginning to look like Britten was not planning on it at all. 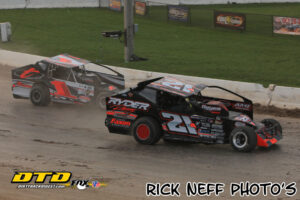 On lap 149, Dippel made a swing at the lead. Hard contact ensued, and Britten was into the outside wall. Dippel slowed with a flat right rear tire the next turn, and Britten went to the pits with damage to all corners. Williamson, 2019 winner, exited the chaos as the new leader.

Williamson was consistent and quick up front, leaving Decker and Sheppard behind once racing resumed. A lap 165 yellow erased Williamson’s half-straightaway lead, and meanwhile, Friesen was back to sixth after his spin and Dippel back to seventh. Dippel and Friesen both made hay on the restart, battling for fourth with Tim Sears Jr.

Friesen initially took fourth and nearly got Sheppard for third, but Dippel ended up grabbing fourth from Friesen on lap 180. Up front, Williamson was steadily inching away from Decker, who had little pressure from Sheppard at the time. However, by lap 190, Sheppard had all but caught Decker. 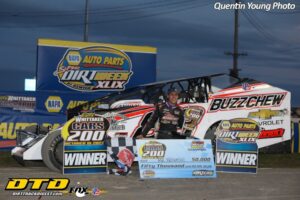 Williamson nailed the restart on the green-white-checkered, hitting his marks where needed through the middle of the surface to score his second Billy Whittaker Cars 200 win in a row. Decker came home second, with Sheppard, Friesen, and Wight completing the top five.

“I can’t thank the guys at Integra Shocks enough,” Williamson said. “We put our heads together after last night figuring out how to get better and put these shocks together last night. They gave me great stuff to run through the chop for 200 laps, usually I don’t make shock changes and win races, I always go back to the baseline.”

In a strategy game very similar to Syracuse, cars pitted as early as possible and attempted to cycle to the lead at the end. Williamson was one of the first to pit and cycled to the front.

“We initially planned on pitting later, but came in on lap 42 because we didn’t see a ton of passing,” Williamson noted. “We pitted then and knew we were racing Billy, Dippel, Matt, and that group. I didn’t think Peter was going to make it the whole way, so we just waited for the 1 to self destruct. I told my guys I didn’t expect Peter to make it on gas, but I feel bad for him because he got moved. Luckily, we didn’t get caught up in that and got the lead.” 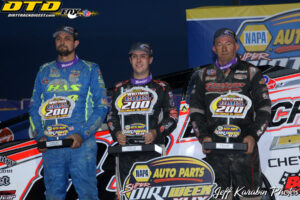 Decker’s final Super Dirt Week run in the Gypsum Racing stable nearly netted him his fifth win and second with the team, but came up one spot short.

“We were pretty good, just trying to make it for a while,” Decker said. “Hats off to my guys for giving me a car that can take a beating out there for 200 laps. I turned up the wick on that lap 167 restart, it was game on from there and I got to use the good car I was given. It was just a matter as to how you caught the holes and how you worked through them.”

Sheppard was close but no cigar for his third Super Dirt Week triumph. After battling with Decker, Sheppard brought it home third.

“I was good enough to run with Decker, but not Mat,” noted Sheppard. “He was really good. I started getting after it late in that one and my guys were telling me I was one of the fastest cars out there that last long run, but we didn’t have enough to catch the 88.”