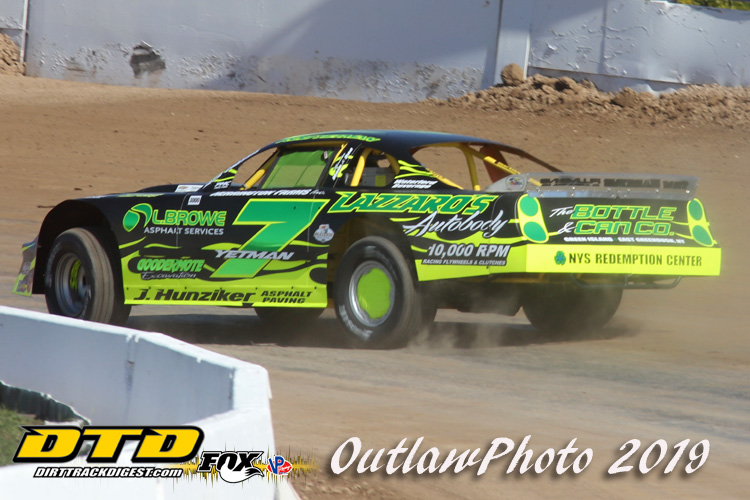 In the first event, Luke Horning inherited the pole after the fast-timer on the day, Tony Markou, elected not to run. Horning led early over Yetman, with Yetman holding steady within a couple car-lengths.

Nick Stone rode in third, but came under pressure from Pete Stefanski. As the two battled, they made contact, and Stone went around on the frontstretch on lap nine. A few other cars were involved, and the caution flew. Yetman had a great restart and jumped to the lead, and Horning couldn’t wrestle the lead back away.

After surviving one more restart, it was Yetman winning over Horning, Bruno Cyr, Sid Harmer, and Stephane Lariviere.  Also locking into the feature unofficially were Burton Ward, Jay Casey
and Brandon Gray.


“The restarts were a little hectic,” Yetman said. “We had some contact going into turn one, I didn’t know what that was about. We got a good piece and I hope the track doesn’t change for Sunday so we can make some moves.”

Josh Coonradt started pole in the second qualifier, leading early over Rich Crane. Coonradt didn’t lead for long, pulling to the pits on lap two as he is already locked into the outside pole. This handed the lead to Crane, with Scott Towslee in tow.

Towslee stayed within striking distance of Crane, with a lead fluctuating between one car length and three. However, Towslee couldn’t get the run he needed to get by, as Crane took the win over Towslee, Jason Casey, Kim Duell, and Chuck Dumblewski. Jay Corbin, Steve LaRochelle and Dean Charbonneau joined the top five in locking into the feature unofficially.

“I don’t got much experience in this car, but here we are,” said Crane. “It’s a good confidence booster going into Sunday, 50 laps will be different but hopefully it works out the same.”