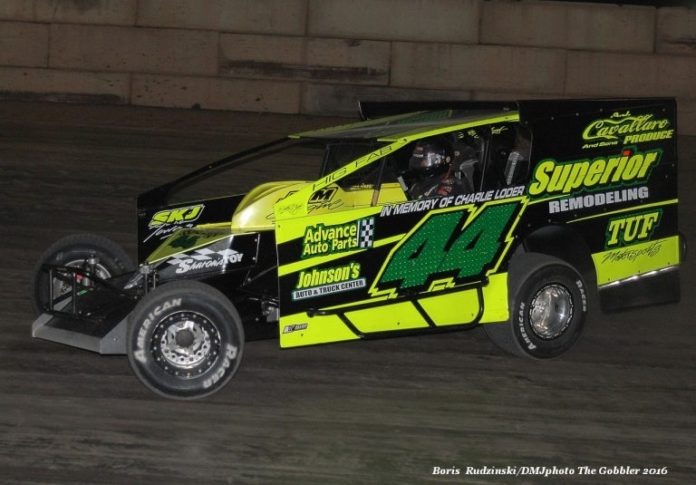 ACCORD, NY – Armed with a new opportunity, Anthony Perrego closed out the 2016 Northeast dirt-track season in victorious fashion Saturday at Accord Speedway.

In a rare December dirt-track event, the Montgomery, N.Y., driver dominated the ‘Gobbler’ big-block/small-block Modified special at Accord Speedway, collecting $5,400 for his efforts. Perrego was driving for Brian Smith’s Superior Remodeling team for just the second time.

For Perrego, the checkered was his second in the ‘post-season’ Gobbler. He won the inaugural version at Accord in 2013.

Perrego was thankful to the Superior Remodeling operation for the opportunity in Victory Lane.

“This is a big one to win,” offered Perrego after climbing to the roof of the No. 44 Hig Fab Chassis mount. “I have to thank this team for giving me a chance. We had a great car today.”

Perrego won before a healthy crowd with a pit-bulging 177 race teams taking part in the program.

The 50-lap main was a rough-and-tumble affair early on. Southern Tier driver Brian Malcolm launched off the pole via a redraw of top qualifiers and put his Chuck Grimm-backed No. 119 into the lead at the outset. In turn one, several cars spun to draw the yellow.

A grinding frontstretch pileup drew the red before the completion of lap one when Jerry Higbie was forced into the outside wall and several cars were collected. All drivers were okay.

Through the series of restarts, Malcolm held command. Mike Ricci, a perennial Accord contender, worked into second by the seventh lap before he was spun in turn one.

Perrego, who had originally started fourth, now took over second and began his pursuit of Malcolm, working both the outside and inside lanes of the quarter-mile oval.

On lap 15, Perrego powered around the outside of Malcolm to take a lead he wouldn’t relinquish. Perrego negotiated lapped traffic flawlessly in the final laps en route to the win at the speedway where he claimed the 2016 track championship.

Malcolm, of Lake Ariel, Pa., held on for a runner-up effort. Malcolm, who chased the Short Track Super Series in 2016, was a feature winner at both Penn Can (Pa.) and Thunder Mountain (N.Y.) speedways.

“Anthony was fast,” Malcolm said. “He’s a good guy and I’m glad to see him win. This is a nice way to end the year for us.”

Heat winners were Ken Ferrier, Perrego, Danny Johnson and Trautschold. The consolations were split by Smith and Tyler Dippel.

Bloomingburg, N.Y., driver Joey Bruning scored the biggest win of his career in the 25-lap Sportsman main. Bruning earned $1,650 including a $150 bonus as the highest-finishing Crate 602 Sportsman in the main event.

Bruning launched off the outside pole and held Tyler Johnston at bay. Tyler Boniface, after starting 12th, rallied to finish third with a late-race pass of PA/NJ Sportsman standout Brandon Grosso, who held on for fourth. Cody Hunt, making his first Accord appearance, placed fifth in a steady drive.

Each of the top-three drivers utilized Crate 602 engines and received cash bonuses of $150 – Bruning and $125 – Johnston and Boniface.

Despite starting 24th on the grid, Kyle Welsch of Narrowsburg, N.Y., topped the Ron Wright Memorial Pure/Street Stock program. He collected $650 and clinched the Street Stock Shootout Series title in the process.

Welsch actually crossed the line second behind apparent winner Shawn Boynton. However, Boynton’s carburetor did not meet post-race tech inspection and he was disqualified. Jim Maher advanced to second ahead of Kevin Skelly, Walt Henry and Josh Towner.

Patrick Bleau pocketed $2,000 as the winner of a wild 100-lap FWD Four Cylinder Enduro that included some 51 entries.

The ‘Gobbler’ was the 2016 season finale for both BD Motorsports Media LLC and Accord Speedway, co-promoters of the event.

GOBBLER LEFTOVERS: To say the Accord Speedway pit area was filled to capacity was an understatement, as several teams were parked outside the typical ‘pit area’ boundaries with 177 race cars on hand. The breakdown was 35 Modifieds, 43 Sportsman, 31 Street Stocks, 17 Slingshots and 51 FWD Enduro entries….

For the second time in the race’s four-year history, the ‘Gobbler’ was contested on the first Saturday of December under fair skies….

Smooth track conditions prevailed despite heavy rain in the days leading up the postponed event….

Despite the huge car count, the Modified feature took the track by 4:28 p.m., less than two-and-a-half hours after the scheduled starting time….
‘GOBBLER’ RACE SUMMARY – ACCORD SPEEDWAY SATURDAY, DECEMBER 3, 2016