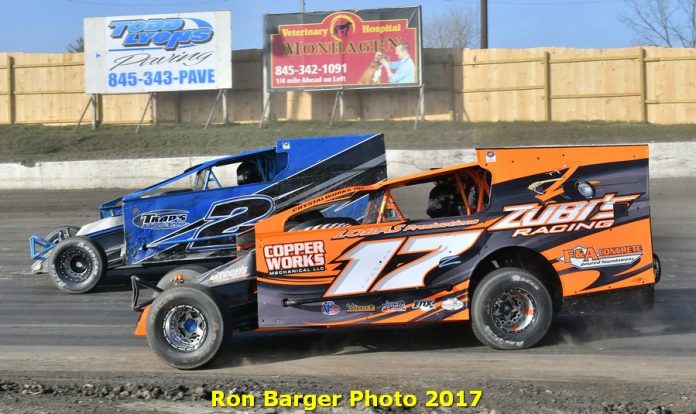 ACCORD, NY – The Catskills Mountains of New York State finally sprung back to life Friday evening as the the sounds of race cars and the mighty cheering of happy fans opened up the Accord Speedway for the 2017 racing season. Promoters Gary and Donna Palmer ushered in the long-awaited season opener at their pristine racing facility located in the area once known as the “Borscht Belt.” The speedway opened last evening to a cast of familiar and new driving stars and these stars offered high speed action with daredevil skills on a race track like no other found on the entire East Coast. A great opening night crowd delayed the opening but once inside they witnessed seven race divisions on a day that was excellent weather wise throughout the evening. The racing action was sponsored by Fast Signs of Kingston, New York www.fastsigns.com and Mombaccus Excavating www.mombaccussandandgravel.com

Brian Krummel and the returning “Statesman” Jerry Higbie brought the starting field to the green flag for the start of the 30-lap Modified headliner. Higbie wasted no time in blasting to the front of the pack with Krummel in hot pursuit. Higbie blasted off of the top of the raceway like a man possessed only to pull to the infield before ten laps were completed with motors troubles. Krummel inherited the lead and would go on to capture the opening win with “Iron” Mike Ricci in hot pursuit for much of the event finishing second. Local ace “Little Richard” Smith was third with a great strong run while the unheralded “Concrete Kid” Kyle Van Duser was equally as strong in fourth place and “The Chairman of the Board” Rich Ricci racing from 22nd starting spot to round out the top five in a splendid driver to the front. Danny Creeden was sixth with invader Brian Malcolm seventh, Danny Tyler eighth from 21st, Anthony Perrego ninth and Richie Eurich finishing tenth.

The Arkel Motors Sportsman feature headliner found a pole start and a fast hot rod the instant formula for success as Kyle Rohner grabbed the lead at the start of the event raced away at will from the rest of the field as he captured his opening night win. Rohner, a former two time champion at Accord, showed the right stuff with a strong run to the win with “The Otisville Outlaw” Corey Cormier finding runner-up honors. Milton Mann was strong all night and finished third while Brandon McGill hustled from 16th starting place to finish fourth with Tony Kowalchuk returning to action and finishing fifth. Jim Johnson, Collin DuBois, Leo Fotopolous, Winter Mead and Tyler Johnston completed the top ten.


Bob Sleight led all laps to triumph in the Upstate Auto Pure Stock feature race. While Sleight led all of the laps, Steve Williams kept it interesting throughout the event as he challenged for most of the event only to have Livy Johnson slip past him late in the race to capture runner-up honors. Williams would finish a hard fought third place with Travis Brockner fourth and Jim Maher completing the top five. Newcomer John Hechinger, Ray Tarantino, Emerson Cargain Jr, Jay Smalley and Chris Kanuk completing the top ten.

The Want Ad Digest Junior Slingshots found Jake Mason wiring the field as he led all laps on his way to victory. Jayden Sleight Was the runner-up.

The WRWD Radio NEWS Sprint Cars found Eric Jennings leading for two laps before Thomas Radivoy found the sweet line at the top of the raceway to pull even and then go past Jennings. Jennings would keep it close throughout with much pressure also coming from Keystone State star Heidi Hedin. Radivoy would earn his first career win at Accord with Jennings second, Hedin third while “The Breadman” Corey Wood was fourth and Brett Graham completed the top five.

The WRWD Rookie Sportsman field was a good one and even though the attrition rate was a bit high on opening night, there is a good deal of talented future stars in the group. The night belonged to Anthony Recchio as the high school student lead all laps to capture his first win at Accord. Recchio was coming off a win on the previous Saturday night at the Hamlin Speedway. “The Flash” Bobby Flood kept pace throughout the event to finish second with Kenny Ryder third, Hunter Lapp fourth, and returning from a ten year layoff Jimmy Devitt was fifth.

A new winner graced victory lane in the Emmanuel’s Marketplace Enduro showdown. Dave Donovan had things going his way up until the white flag lap when Johhny Bankich overhauled him and led the final lap to claim the popular victory. Donovan was second with Paul Harding, Jeff DeGroat and Cody Helms completing the top five.

GEMSTONES:
Heat winners for the opening night event included Kyle Rohner, Milton Mann and Cole Hentschel in the Sportsman division. Pure Stock heats were won by Bob Sleight and Steve Williams. Three heats were needed to set the field for the Modified division with Brian Krummel, Jerry Higbie and Richard Smith claiming wins while the consolation win went to Chad Loidice. In the Junior Slingshot heat it was Jake Mason in for the win. Eric Jennings capture the lone heat in sprint car action. Rookie Sportsman heats were claimed by Bobby Flood and Anthony Recchio

The start of the event was delayed for a few minutes to allow the crowd a chance to find their way to their seats in a solid opening night event for the speedway and the Palmer Family. The Palmer Family is celebrating their seventeenth anniversary as the owners and promoters of the Accord facility.

The Accord concession stands were at full tilt as the hardworking staff busted their humps to cover the hungry racing crowd that came out to support the speedway.

The speedway itself was in spectacular condition as Promoter Gary Palmer spent the entire week in working his magic on the multi-channeled raceway that saw three and four wide action throughout the evening of events. All of the drivers offered their praises for the well groomed facility.

Many new cars and paint schemes were the order of the day for the pit area that bustled all evening long. Eleven time Accord Modified Champion Rich Ricci Jr was back in action and Allison Ricci was on board for opening night. Sportsman Champion “Jammin” Jimmy Wells moved into the Modified division but suffered from a lost wheel early on in the feature event. Bob Tersillo, Corey Wood and winner Thomas Radivoy were all new faces for the sprints while Brett Graham, a Modified campaigner at Accord is trying the sprint division with a non traditional look racer. It was good to see “Tommy Gun” Tommy Johnson return to the Modifieds. While running well, he too felt the mechanical gremlins and fell from the event. It was nice return to action for Jay Smalley in the Pure Stocks while new faces included Tanner Granaker and John Hechinger. Rookie Sportsman newcomers found former regulars Jimmy Devitt and Tom Vasta returning to the racing wars while Hunter Lapp, the defending Junior Slingshot Champ, finishing fourth in his new division.

All in all it was a great opening night event. Grandma Annie’s pies were distributed to all of the feature winners.

Racing is on tap every Friday night at Accord Speedway from April through September. Please make note of the new starting times: Pit Gates open at 5:00; Spectator Gates open at 5:30; Hot Laps begin at 7:00 and the racing begins at 7:30 PM. Admission for Adults $14.00; Seniors (65+) $12.00; Children $3.00 (11+ under) Indoor Seating $20.00; Family four pack special: 2 Adults + 2 Children and $20.00 in Accord Bucks for $44.00 (a savings of $10.00)
Special event shows do have an increase in admission.
May 5th brings in all regular divisions in action. HO Penn is the headline sponsor for the evening of speed.
For further updates and information regarding all of the news and additions to the Accord Speedway, log on to their well documented website at: http://www.accordspeedway.com or call the speedway hotline at: 845 626 3478.