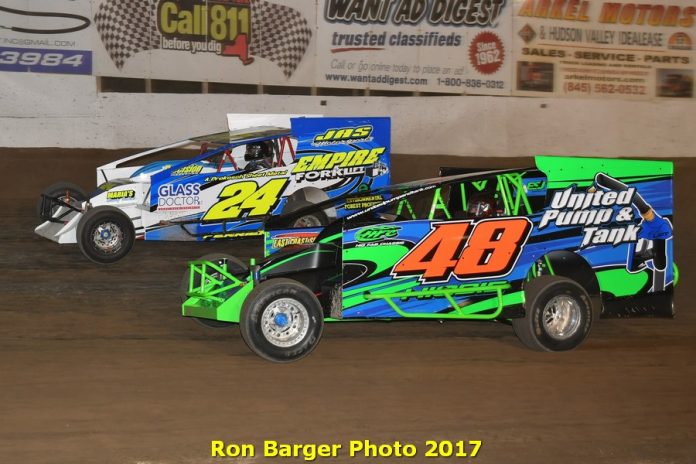 ACCORD, NY – The always unpredictable weather pattern in the Northeast had rain scheduled in the forecast at some point on Friday, but Accord Speedway Promoters Gary and Donna Palmer threw caution to the wind and put on a great show last night at the speedway. A good sized racing crowd came out to witness the spirited action and rain did begin to fall as this writer headed home.

Hard working Accord promoter Gary Palmer continues to work overtime to give his driving roster the best possible racing facility he can and the race to the walls speed channels were a true testament to his dedication to his craft as the speedway offered many racing seams for the drivers to display their speed and guile. The evening was sponsored by HO Penn Machinery and Arkel Motors. The Checkered Flag Bonus was sponsored by Dreaming of the Mouse Travel.

The solid six feature race card found “The Statesman” Jerry Higbie returning to the WRWD Radio Victory Lane for the first time in many seasons after a torrid battle with early leader Ken Ferrier in the United Pump and Tank Modified division. “The Bushkill Bullet” Kyle Rohner made it two in a row after heat problems forced him to qualify through the consolation event and he came through the pack from 18th starting position to claim the win in the Arkel Motors Sportsman division finale. “The Intimidator” Ray Tarantino was fast and then some as he top-sided his way to victory in the Upstate Auto Pure Stock Division feature event. Eric Jennings was lightning fast as he grabbed up his win of the season in the WRWD Radio NEWS Sprint Cars. “The Cold Spring Kid” Jake Mason made it two in a row as claimed the win in the Want AD Digest Junior Slingshots. Stan Vishinski IV captured the WRWD Radio Rookie Sportsman feature event in an event that changed leaders a few times before Vishinski took over the lead for good just before the midway point.

Ken Ferrier and Eddie Burgess brought the United Pump & Tank Modified starting field to the line for the start of the 30-lap main grind. Jimmy Wells shot between the two out of turn two to lead the first laps of the event. A restart brought the field together and Ken Ferrier assumed command of the event. Restarts would bring the field back together with Ferrier now holding on to the slimmest margin of the lead with Jerry Higbie making his presence known to all and pressuring Ferrier at every corner. On lap-26, Higbie found the sweet spot he needed to slip under Ferrier and take command of the event and go on for the win. Ken Ferrier was second in a great run with Jesse Marks finishing third after starting eighth. Scott Ferrier was fourth and Danny Tyler hustled from a 19th place start to claim fifth. Opening night winner Brian Krummel was sixth with Mike Ricci (20th), Ed Dachenhausen, Danny Creeden and Richie Eurich completing the top ten.


The Arkel Motors Sportsman event was a true to life barnburner as a fast field of race cars highlighted another great event. An eight car skirmish at the start would eliminate some cars but when the racing got rolling it was all-go on the speedway. Nick Plumstead would lead the event through the first ten laps until Phil Goetchius and he got together sending both to the rear. Kyle Rohner inherited the lead and would work his own brand of magic through slower traffic towards the end of the event to claim his second win in a row at Accord in 2017. Jimmy Johnson was the runner-up with Jared LaBagh, Tyler Johnston and Winter Mead completing the top five. Heading up the second five were the returning Daniel Morgiewicz, Greg McCloskey, Brandon McGill, Robbie Knipe and Tony Kowalchuk.

Jake Mason made it two in a row in the Want AD Digest Junior Slingshot event with a solid run over Tyler Banks. Jaden Sleight was third and newcomer Brock Pinkerous was fourth.

A tip of the fedora to Promoter Gary Palmer for having the speedway groomed to perfection for the evening of speed. The track was racy from top to bottom and three and four wide racing were commonplace throughout the night.

HO Penn Machinery brought out a couple of pieces of equipment so the fans could see what they are all about. They also raffled off a garage stool and had giveaway items for the fans.

Many thanks to Mike DuBois and Randy Brundage for working on the caution lights prior to the racing action.

Happy Birthday wishes go out to “The Gentleman” Ed Dachenhausen

The Grandma Anne’s Pies were back in the house and all feature winners and two lucky fans were the recipients.

May 19th brings all regular divisions in action. PowderTech is the headline sponsor for the evening of speed. The second Enduro Event will take place on the 19th sponsored by Emmanuel’s Marketplace