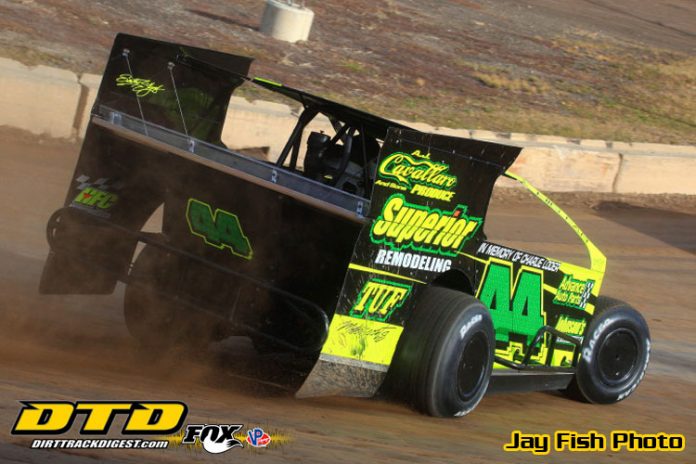 ACCORD, NY- The Catskill Mountain area of New York offers many spectacular views and exciting things to do for vacationers. However, Fridays are reserved for the exciting action only exciting high level short track racing can provide. The Accord Speedway has been doing just that, giving the loyal racing fans some great racing action when Mother Nature does not rain on their parade. The first really good weather Friday evening brought in another great roster of driving talent and the fans went away satisified they had witnessed another great night of dirt track racing. The evening of speed was sponsored by Powder Tech Powdercoating from Duanesburg, New York. Their website is: www.powdertechinc.com. The checkered flag bonus was sponsored by Behrents Speed Center.

When all was said and done, The “Montgomery Missile” Anthony Perrego clicked for his first win of the season in the United Pump & Tank Modifieds. Tony Kowalchuk led only the last lap in scoring his first win of the season in the Arkel Motors Sportsman. Travis Brockner had the hot hand as he captured his first win in the Upstate Auto Pure Stocks. Eric Jennings made it two in a row in the WRWD Radio NEWS Sprint Cars. “The Cold Spring Kid” Jake Mason made it three in a row as he once again dominated the action in the Want Ad Digest Junior Slingshots. “The Jersey Force” Anthony Recchio scored his second win of the season in claiming the win in the WRWD Radio Rookie Sportsman. Dave Donovan captured another win in the Emmanuel’s Marketplace 4-Cylinder Enduro finale at the speedway even though he was not the first one across the finish line.

Jimmy Wells and Tommy Johnson brought the United Pump & Tank Modified field down for the start of the 30-lap main event. At the drop of the green it was Well getting the jump on the field and grabbed the lead coming out of turn two on the initial lap. Wells would lead the event through lap ten when he was out-powered by the strong running Perrego. The action was hot and heavy as many drivers tried to punch their ticket to the number one spot. Perrego held off comers but as the race hit the latter stages, Brad Rothaupt was pesky and fast as he tried to wrestle way the top spot. Rothaupt would pull just about even at times but Perrego would prevail and in doing so, captured his first win of the season at Accord. Rothaupt did an excellent job and finished in the runner-up role. Danny Tyler hustled to a third place finish. Brian Krummel was fourth and Mike Ricci finished fifth. Jesse Marks headed up the second five with Danny Creeden, Richard Smith, Richie Eurich and Eddie Burgess rounding out the top ten.

In the Arkel Motors Sportsman action, “The Little Rock” Matt Shultz hustled into the lead at the drop of the green flag. Shultz would race to daylight ahead of the field and built up a huge lead. Things would change quickly on lap ten as two-time winner Kyle Rohner raced through the pack and became a contender until turned around by Phil Goetchius. The big lead evaporated for Shultz but as the green flag was displayed he once again ran to daylight but moving into second place with a good car under him was Tony Kowalchuk. The race slowed down with a few cautions but Shultz was steady and holding off the baseline advances of Kowalchuk. Shultz still held the lead on the white flag lap but bobbled a bit between turns one and two and Kowalchuk seized the opportunity to blast by and lead the final lap to score his first Accord win in quite some time. Shultz, although disappointed, was a strong runner-up with the returning Chris Stevens racing to third place, Tyler Johnston fourth and Cole Hentschel completing the top five. Rohner recovered from his early misfortune and raced back to sixth whil Jim Johnson, Winter Mead, BRandon McGill and Ralph Ronk completed the top ten.


Anthony Recchio put on a great show as he led all of the way in scoring his second win of the season in the WRWD Rookie Sportsman main event. “The Hurricane” Hunter Lapp was solid with a strong runner-up finish. Kenny Ryder was third with Kevin Stevens fourth and Bobby Flood fifth after running with the leaders, spinning and then making a solid comeback.
Jake Granacker headed up the second five with RJ Daley, Mike Corbin, Brandon Daley and newcomer Chet Doolan following.

Emerson Cargain led the first lap of the Upstate Auto Pure Stock feature before yielding to a hot running Travis Brockner. Once in front, Brockner built up a healthy lead with Ray Tarantino giving chase late in the event. Brockner scored his first win of the season with Tarantino second, Emerson Cargain third, John Hechinger fourth and Steve Williams rounding out the top five.

The WRWD Radio NEWS Sprint Cars found Eric Jennings starting up front and that was all he needed to score his second consecutive win at the speedway by leading all laps on his way to victory. Larry McVay was the runner-up for the second week in a row and Heidi Hedin scored her second straight third place finish. Andrew Davis was fourth.

Jake Mason was victorious in the Want Ad Digest Junior Slingshot event and he did it by leading all laps on his way to victory and score his third win in succession. Ashton DeWitt made his first appearance a good one as he finished second with Jaden Sleight third, Wyatt Hager fourth, newcomer RJ Sherman fifth and Brock Pinkerous sixth.

Jeff DeGroat crossed the finish line first but over aggression on the part of a few drivers resulted in some penalties that altered the outcome of the event. Dave Donovan was declared the winner of the event. Jerry Kinteger was second with Paul Harding, Gene Helms and Cody DeMarmels completing the top five.

New cars and drivers galore were on hand for the evening and included John Woinoski in the Pure Stocks, Bob Tersillo returned to the seat of the Porco Energy sprinter in the NEWS Sprints. Ashton DeWitt, Wyatt Hager and RJ Sherman were new in the Junior Slingshots. Sherman is related to noted retired Modified campaigner Stan Sherman, who competed at OCFS, Accord and Nazareth back in the day. Rookie Sportsman were Chet and Jamie Doolan. Chris Stevens, Austin Smith and Chris Van Duser made their first starts of the season in the Sportsman division.

Defending Pure Stock track champion Bob Sleight was driving the Kanuk Motorsports entry. “Flyin” Brian Malcolm returned to the speedway and had a great run going until a late caution put him to the rear. A few drivers were missing on Friday and hopefully will have their problems sorted out for next Friday’s “Salute to the Veterans” event.

Promoter Gary Palmer had the track and the grounds in their usual pristine condition.

As intermission got underway, Announcer Steve Pados brought the Junior Slingshot winner Jake Mason into the tower for an impromptu interview session and the budding driving star handled the questions with ease.

Jonathan McGibbons is the new flagger for 2017 at the speedway

May 26th brings in all regular divisions for action. WRWD Radio 107.3 FM is the headline sponsor for the evening of speed and celebrating with a salute to all Veterans.