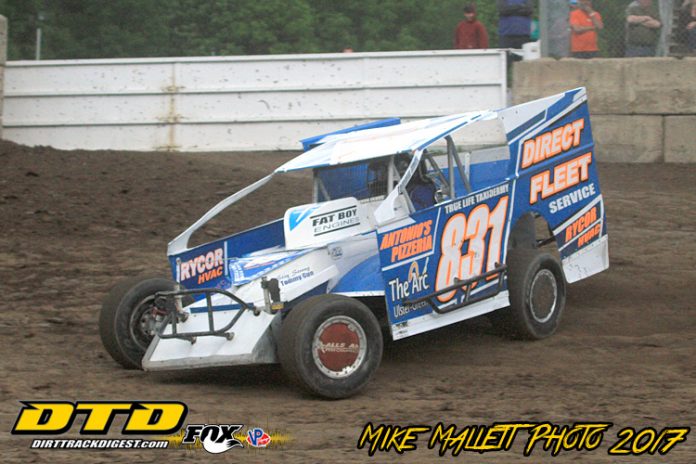 ACCORD, NY – Accord Speedway Promoters Gary and Donna Palmer once again rolled the dice and came up the big winners on Friday evening as they ushered in the Memorial Day weekend at their superb quarter mile speedplant located in the Catskill Mountains of New York State.  With a less than admirable weather forecast for the evening, the Palmer Family had a great field of racers prepared to go racing and an enthusiastic crowd of loyal fans on hand for the event. WRWD Radio 107.3 FM was the headline sponsor for the evening and presented a show with live music from country music hopeful Bill Manis, along with the VFW Color Guard and the host of the show, radio personality Uncle Mike Hansen from WRWD Radio. The Checkered Flag bonus was sponsored by Insinger Fuels.

Not one of the fans left the house disappointed as defending 2016 Sportsman champion Jimmy Wells took advantage of a front row starting spot and wired the field to score his first ever Modified victory at the speedway in the United Pump & Tank Modifieds. Nick Johnson laid claim to his first win of the season in the Arkel Motors Sportsman finale with a stellar run to the checkered flag. Eric Jennings made it three wins in a row in the WRWD Radio NEWS Sprint Cars. Steve Williams put together a masterful run to triumph in the Upstate Auto Pure Stock feature. “The Cold Spring Kid” Jake Mason made it four wins in a row in the Want Ad Digest Junior Slingshots. Kevin Stevens captured the WRWD Radio Rookie Sportsman event to close down the curtain on an excellent night of racing.

Jimmy Wells and Joe Judge brought the United Pump and Tank Modified division starting field to the line for the start of the 30-lap headliner for the Modified division.  Quick starting Wells would jump into the lead with fourth starting Ken Ferrier rocking the top of the raceway to move into the runner-up slot by lap four. Wells had a big lead early on that Ferrier would begin to nip away at and by lap twenty had closed in on Wells as they entered slower traffic. Wells was a bit quicker in slipping past traffic and Ferrier bobbled with five laps to go when he jumped the cushion and had to correct the racer. Wells would go on to capture the win with Ken Ferrier in for second place money. Danny Creeden ran a steady race to finish third with Joe Judge and Brian Krummel completing the top five. Krummel began the event in 11th position. Scott Ferrier headed up the second followed by Ed Dachenhausen, Richard Smith, Jesse Marks and Anthony Perrego.

Ryan McCartney was fast out of the blocks to kick-off the WRWD Radio Rookie sportsman event. A few jingles early on slowed the pace but on each restart McCartney proved to have the hot hand as he continued to set the pace. Vinny Visconti, Jake Granacker and Kevin Stevens provided strong opposition during the event. On lap twelve things unraveled quickly for McCartney as Brandon Daley got out of shape on the backstretch and fought the car into the turn with McCartney coming on the scene with the cars making contact and McCartney spinning towards the inside track barrier. The turn of events would put McCartney out of contention and place Kevin Stevens in the lead. Stevens would lead the final three laps to claim his first ever victory at Accord.  Granacker raced to runner-up honors with Hunter Lapp, Vinny Visconti and Jimmy Devitt completing the top five. Newcomer Jeff Higham headed up the second five with the returning Tanner Johnson, Ryan McCartney and newcomers Michael Bull and Jared Miller completing the top ten.

The WRWD Radio NEWS Sprint Car finale found Corey Wood leading the first three laps of the event before yielding to the high flying Eric Jennings. Jennings would build from there as he built up a lead that would soon find Larry McVay pecking away at Jennings advantage. Jennings was able to keep McVay at bay and would go on to capture his third win of the season at Accord.  McVay was strong in second place with the returning Larry Ricci third, Andrew Davis fourth and newcomer Brandon Gates completing the top five.


Jake Mason continued his winning ways by capturing his fourth win in succession at the speedway. Newcomer Brock Pinkerous was the runner-up with Ashton DeWitt third. Mason added to his winning total with a $100.00 bonus thrown in from Corey Cormier Racing for the winner of the Slingshot event.

The Arkel Motors Sportsman event was a barn-burner and head-turner from the drop of the green flag as Rafael Carson would lead the first two laps before losing the handle on his Pine Cone Resort sponsored hot rod. On the restart, Nick Johnson displayed a big right foot and took command of the event. Corey Cormier hustled his way from eighth spot to become a player and just as quickly Kyle Rohner raced from 12th spot to also challenge for the lead. As the laps clicked off, it became a four car race as Johnson, Cormier, Rohner and an emerging Tony Kowalchuk were duking it out. A jingle on lap-17 found a many car pile-up that took out Rohner, Ralph Ronk and Milton Mann. When the event went green, Johnson survived the strong challenge from Kowalchuk to score his first victory of the season with Kowalchuk second. Corey Cormier, Robbie Knipe and Cole Hentschel completed the top five. The second five was headed up by Tyler Johnston with Jimmy Johnson, Brad Horton, Matt Shultz and Mike Senecal following.

Steve Williams led wire to wire in the Upstate Auto Pure Stock finale to capture his first win of the 2017 racing season. The win didn’t come easy as Emerson Cargain and Travis Brockner applied plenty of pressure on him as they would finish second and third respectively. John Hechinger and Austin Smith completed the top five.

The hotly contested racing action was completed at 11:15 PM. Promoter Gary Palmer and crew worked overtime to bring the track to racing standards after the abundance of rain that fell on the speedway on Thursday.

Many thanks to Corey Cormier and Team for the generous addition to the Junior Slingshot purse. Corey enjoyed a fine win last Sunday at another speedway.

Thanks again to Uncle Mike Hansen and WRWD Radio for a wonderful night at the speedway. The presentation went well and plans are already underway to make next year’s event even bigger and better. Uncle Mike and Announcer Steve Pados talked about the many activities WRWD Radio is involved with and of the great tie in with the Accord Speedway.

The Empire Lightning Sprints return to the speedway next week for their first appearance of the season and hope many of the stars of the series will be part of the action.