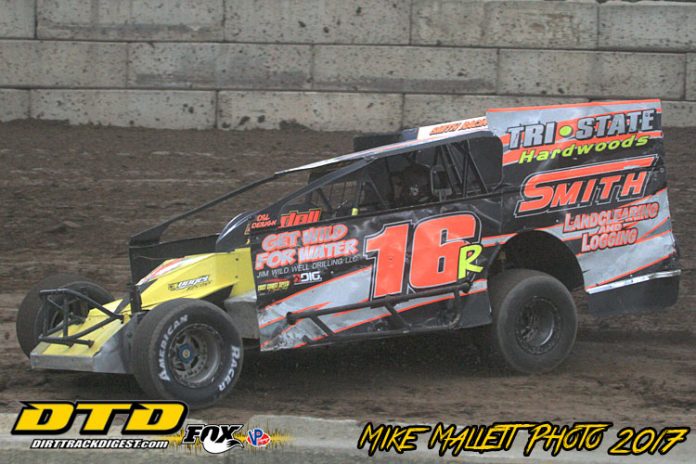 ACCORD, NY – Accord Speedway Promoters Gary and Donna Palmer finally had a great Friday evening as a good burst of June weather allowed the promotional team to not look over the shoulder to see if any rain clouds were on the horizon. The Palmer Family hosted a seven division race card at their superb quarter mile speedplant located in the Catskill Mountains of New York State. A nice crowd was on hand to enjoy the evening of speed sponsored by the good folks at D&D NAPA while the Checkered Flag Bonus was sponsored by the Palmer Family.

Richard Smith rocked the house with an outstanding drive to capture his first win of the season in the United Pump and Tank Modified finale and his first win at the speedway since 2011. “The Otisville Outlaw” Corey Cormier captured his first Accord win of the season in a rim-riding effort as he won the Arkel Motors Sportsman main. “The Intimidator” Ray Tarantino made it two wins for the season as he captured the Upstate Auto Pure Stock encounter. “The Highside Hustler” Eric Jennings raced to his fourth win of the season in the WRWD Radio NEWS Sprint Car feature. Ryan McCartney was triumphant in the WRWD Radio Rookie Sportsman feature event to claim his first ever win at the speedway. “The Cold Spring Kid” Jake Mason raced to his fifth consecutive win at Accord in the Want AD Digest Junior Slingshots. The return of the Empire Lightning Sprints proved to be a happy one for Zach Bennett as he winged his way around the speedway to capture the feature event with an exciting performance.

Richard Smith led the first eleven laps of the United Pump And Tank Modified feature before yielding to the high flying Brad Rothaupt on a restart. Rothaupt would lead for three laps before Smith, with a full head of steam, overtook Rothaupt to assume command of the point once again. Rothaupt and Danny Creeden would run second and third for quite a few laps but making his move into the top five was Danny Tyler. The “Showtime Kid” had himself a fast hot rod and slipped past Rothaupt and Creeden to drive into the runner-up slot with five laps to go. Tyler could not muster up a challenge with Smith with time running out and it would be Smith in his Smith Logging and Land Clearing sponsored machine. Tyler was second in a stout run from 11th position. Rothaupt, Creeden and Anthony Perrego would complete the top five. The second five were Brain Krummel, Brian Malcolm, Kyle VanDuser, Chad Loiodice and Ken Ferrier.

The Arkel Motors Sportsman event found Milton Mann jumping out into the lead at the start and he would lead for three laps before giving way to Rafael Carson who would lead from lap four through six. A restart would allow Mann to regain the lead and Mann was steady in trying to keep his Sedita mount ahead of a quick group of competitors headed up by Corey Cormier. Cormier worked the top and the middle of the raceway before pulling alongside of Mann for a few laps with driver seeking the advantage. On lap 15, an inside move from Corey Cormier off of turn two allowed him to burst into the lead. While Mann slid backwards towards the end of the event, the pressure was mounting as Kyle Rohner, who spun on the opening lap, worked his way from the rear of the field to become a player. Rohner moved into second place late in the race but the evening belonged to Cormier as he raced to victory in the 25-lap event. Rohner was second with Matt Shultz, Tony Kowalchuk from 15th position and Cole Hentschel rounding out the top five. The second five found Tyler Johnston, Robbie Knipe, Jim Johnson, Milton Mann and Jamie Yannone following.

Ryan McCartney led the first two laps of the WRWD Radio Rookie Sportsman feature attraction but would give way to Anthony Recchio who powered into the lead. McCartney would regain the lead on lap four and just as quickly would have the smooth running Hunter Lapp making his way into the runner-up slot. McCartney and Lapp would wage a dual until the end of the event as McCartney would nearly lose the lead on a couple of occasions but had more than enough foot to keep the car at the number one spot. McCartney would go on to capture his first ever win at the speedway with Lapp in a runner-up role. Kevin Stevens would come on strong for third with Jake Granacker and Vinny Visconti completing the top five. Recchio hustled back through the field to gain sixth place with Tanner Johnson, Jared Miller, Jamie Doolan and Michael Corbin completing the top ten.

John Hechinger led the first three laps of the Upstate Auto Pure Stock event before Ray Tarantino powered by with a run to the top of the speedway. Once in front, Tarantino pretty much held the field at bay as he led the remainder of the laps to claim his second win of the season. Hechinger has been a real surprise in 2017 as he enjoyed another fine run with a runner-up finish. Steve Williams, Emerson Cargain Jr, Travis Brockner (subbing for Bob Sleight), Harry Bachman, Tanner Granacker, James Goetchius and Chris Kanuk completed the field.

Jake Mason added his fifth consecutive win at the speedway in the Want Ad Digest Junior Slingshot finale. He did it in convincing fashion as won by a straightaway over Brock Pinkerous.

Corey Wood would jump into the lead in the WRWD Radio NEWS Sprint feature and would lead for three laps before yielding to the returning Thomas Radivoy. Radivoy would lead until lap nine when Eric Jennings blasted by with a top to bottom power move to claim the lead. Jennings would lead the remainder of the laps to claim his fourth straight win at the speedway. Jersey star Rich Mellor rebounded from a mid race spin to charge back and finish second. Larry Ricci, Larry McVay, Andrew Davis, Bob Tersillo and Brandon Gates completed the field.

The return of the Empire Lightning Sprints found an energetic group of drivers happy to return to their old stomping grounds. Doug Norrie would lead the first lap of the feature but on lap number two found himself making contact with the inside barrier and suffering front end damage. Clint Roehrs, a former three time champion at Accord, would lead the next lap before yielding to the high flying Zach Bennett. Bennett would quickly carve out a lead but Roehrs would detonate an engine bringing a red flag out to the field. On the restart, it was all Bennett as he winged his way around the speedway from the top shelf. Bennett would get the win and believed to be his first ever win at the speedway. Justin Phillips, Peter Dance, Alex Bell, Lou Torres, Canadian Charles Belanger, Jesse Pruchnick and Alex Adamsky completed the field.

The hotly contested racing action was completed at 11 PM. Kudos to Gary Palmer and crew for whipping the speedway into excellent shape for the evening of racing action.

New drivers on hand for the evening besides the traveling Lightning Sprint roster included Alyssa Cody in the Modifieds. Shane Henion was a new addition to the Sportsman division. Tanner Granacker returned to action in the Pure Stocks. John Miller made his initial start with the Rookies. New sprinters on hand were Jeremy Quick and Rich Mellor. Mellor was victorious last season at the Halloween Bowl.

Racing is on tap every Friday night at Accord Speedway from April through September. Please make note of the new starting times: Pit Gates open at 5:00; Spectator Gates open at 5:30; Hot Laps begin at 7:00 and the racing begins at 7:30 PM. Admission for Adults $14.00; Seniors (65+) $12.00; Children $3.00 (11+ under) Indoor Seating $20.00; Family four pack special: 2 Adults + 2 Children and $20.00 in Accord Bucks for $44.00 (a savings of $10.00)
Special event shows do have an increase in admission.
June 9th brings in all regular divisions for action on a night sponsored by our good friends at Williams Lumber. The evening of speed will also highlight the Junior and All Star Slingshot Nationals.
For further updates and information regarding all of the news and additions to the Accord Speedway, log on to their well documented website at: http://www.accordspeedway.com or call the speedway hotline at: 845 626 3478.