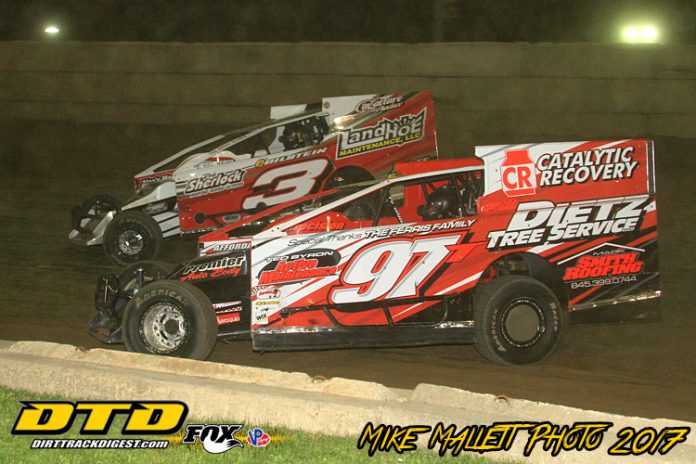 ACCORD, NY – After suffering from a rain cancellation last Friday evening, the Accord Speedway hopes to get back on track on Friday evening, June 23rd when the headline sponsor for the evening will be Kingston Nissan located at 140 Route 28 in Kingston, New York. (www.kingstonnissan.net) The evening will highlight “Bike Night” at the speedway with kid’s bikes being raffled off for years ten and under and donated from fans and friends of the speedway as well as local business owners to give away to a lucky child.

Eight divisions of racing will take to the speedway on Friday with the six regularly scheduled racing divisions and the addition of the Emmanuel’s Marketplace sponsored Four cylinder Enduro event and the first appearance of the season by the Northeast Vintage Modified group.

The one week delay in the racing action will only increase the hype and will allow for a few of the racers that have been having some mechanical problems during the season to gain an extra week to button down the equipment for a run at the roses. The time off will also allow some of the drivers to re-group from an initial slow start and get back into the thick of things at the speedway. The Palmer Family has been in control of the Accord facility since late 2000 and the 2017 racing season marks the seventeenth season of successful promotions since they took over the ownership of the facility.

Due to the whims of Mother Nature only six feature events have been recorded in the books for 2017 at Accord. In the United Pump & Tank Modified division, there have been no repeat winners to date. Brian Krummel, Jerry Higbie, defending track champion Anthony Perrego, Jimmy Wells, Richard Smith and Danny Creeden have all scored a win and one of the driving stars would like to be the first to get that seemingly elusive second win. With a roster that is blessed with both younger and veteran driving talent, Friday night just might find another new winner in the WRWD Radio Victory Lane.

Former two-time track champion, Kyle Rohner is the only sportsman driver to date to secure a second win in the Arkel Motors Sportsman division. Tony Kowalchuk, Nick Johnson, Corey Cormier and Brandon McGill have each scored one win.

Eric Jennings has been going great guns at Accord with four wins in the WRWD Radio NEWS Sprint car division. Thomas Radivoy won on opening night and NJ hot-shoe Rich Mellor claimed the last feature run at the speedway. The division has gained in leaps and bounds since it first began and the runor mill has circulated that more of these cars will be ready shortly.

Jake Mason has stepped up big-time in 2017 with five wins coming in the Want Ad Digest Junior Slingshot division. Recent National Tour winner at Accord, Tyler Banks has been having a great season in competition and is expected to return to the speedway in future weeks.

Anthony Recchio is having a sensational season in racing as he has captured two feature wins in the WRWD Radio Rookie sportsman ranks and has won three events at his Saturday night stop at Hamlin Speedway. Stan Vishinski, Kevin Stevens, Ryan McCartney and Vinny Visconti have each scored a win in the growing division at the speedway.

The Emmanuel’s Marketplace Four Cylinder Enduros have raced in two events at the speedway this season with Johnny Bankich and Dave Donovan each securing wins. One thing for sure, these daredevils leave it all on the track when the checkered flag falls.

Big offerings are in store for the racing fans the following week at the speedway as June 30th will find the fireworks experts from Santore’s Famous Fireworks back in the house to unleash their special brand of magic to the skies over the Accord facility with their one of a kind light show and fireworks extravaganza. The now famous Chicken BBQ with all the fixins will compliment the speedway’s salute to Independence Day. Come early and enjoy the always spectacular racing and the great food the speedway is noted for. The event will be sponsored by Emmanuel’s Marketplace.